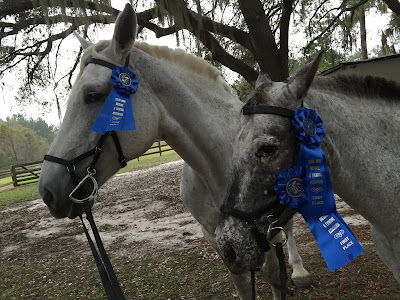 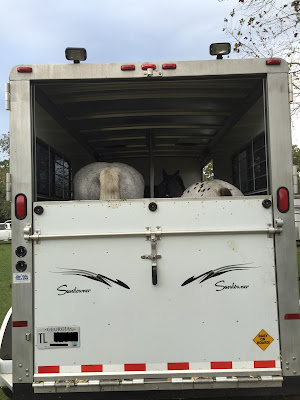 The Odd Couple back in action together!

The Other Half had to work yesterday so I got a day stall at the show.  That way I could just switch the girls out and know the one that I wasn't riding was safe and secure.  I don't leave horses tied to the trailer out of my sight, not because my girls are bad, just something I don't feel comfortable doing.  I also couldn't put one back on the trailer while I rode the other because it was 86 degrees yesterday.  In the barn it was nice, shady, and the fans were on.  Klein especially enjoyed herself in the stall by making alfalfa soup in her water bucket between being a cry baby.  That's right...Klein actually cared about the whereabouts of another equine.  She really loves her Mochi.  She eventually got over it and was quiet.

The schedule was awesome.  All of my rides on Mochi were done and I had an hour and a half between my last ride on Moch and my first ride on Klein.  So that way I was completely done with one mare for the day before I rode the other.  No switching back and forth.  That gave me time to rinse off Mochi good and take her for a little walk.

Moch warmed up for dressage very nicely.  I was super happy with how she was going.  We went in for our first test and she was great. 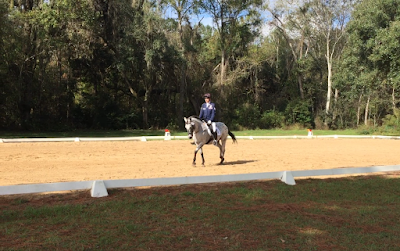 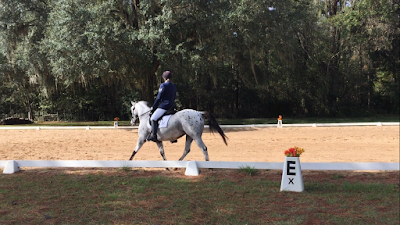 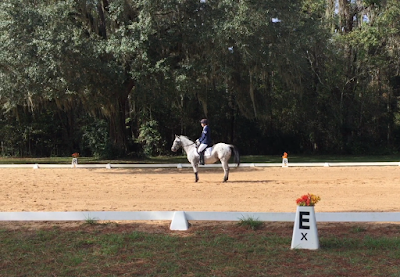 This was the last halt for her second test.  I was a little distracted by her and halted her just a second late, but you can't beat that halt.

For her stadium she was a bit wild, but fun.  She was double clear in both rounds.  She is definitely ready to move up and will move up to 2' immediately (my goal is to have her going at BN by next fall). 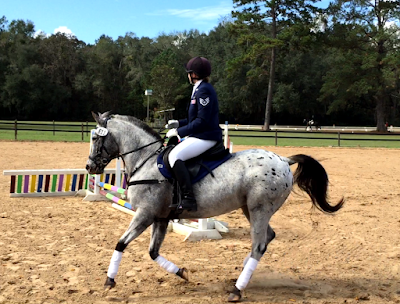 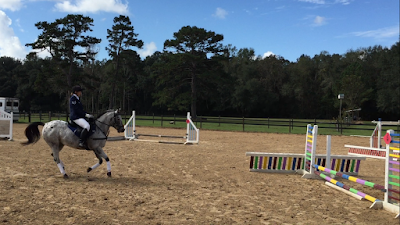 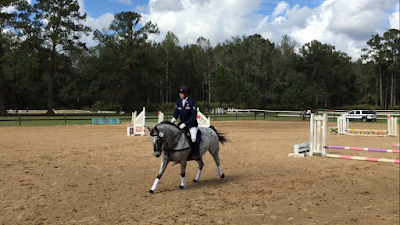 Next up, my Klein baby.  It felt SO good to have her back out.  This was her first show since April.  Then by June she had her summer break, then we had the anhidrosis hiccup, and lately she's feeling AMAZING.  I feel like just in our past few rides both on the flat and jump schooling we have leveled up and are ready to start making some REAL progress again (post coming later on that).  We have gotten dialed in on a new level lately.

I switched my girls out and put Moch in the stall.  Funny, Klein didn't have much to say when she was out with me.  That makes me wonder how much of her cry babying was because she was slightly jealous.  I could tell she was happy to be out and about.  That made my day even better than it already was.  A lot of people at the show were really happy to see her too.  Every show I've went to with Moch people ask me where Klein is and what she's up to.

Klein warmed up GREAT for dressage.  I felt like we were about to have an awesome test.  We did.  We had one small hiccup when we came back from the lengthening at the canter where she broke to the trot for a step, too much half-halt on my part.  It was just a step down into the trot but I caught her immediately and she was instantly back in the canter.  I knew the test wouldn't be razor sharp because we just haven't had enough time to work on some specifics like our lengthenings lately (like more shoulder-in through the short side before a lengthening, getting her more on the aid to prepare for a lengthening).  I focused more on just her overall fitness and getting the general movements of the test accurate (15m circles, promptness of aids, etc...)

Our lengthenings are something we struggle with.  We were at a good place with them before her summer break.  It will take a little more work to get back to that point so I didn't expect too much with those movements.  The judge thought even less.  I don't think I've ever gotten a 4 on Klein before for anything but she hammered us on the lengthenings and gave us a 4.  Last test (April) we got a 6.5 on them.  I don't think in general she was a fan of Klein.  She said our canter was a little slow as well.  I also didn't carry a whip in this dressage test (championship).  If I have my whip it puts a little more pep in her step just knowing it's there.  Oh well.  We scored a 36.9.  The lowest she's gotten on a USEA Training Level is a 30.  Our last show in April her score was a 32.something. So, not THAT far off from our average.  36.9 or not, the way she is going right now, it will be easy to improve. 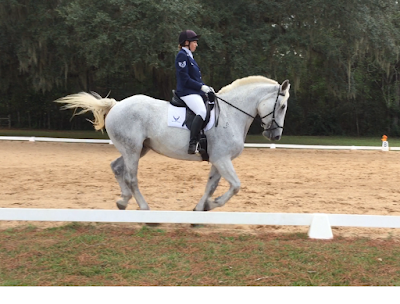 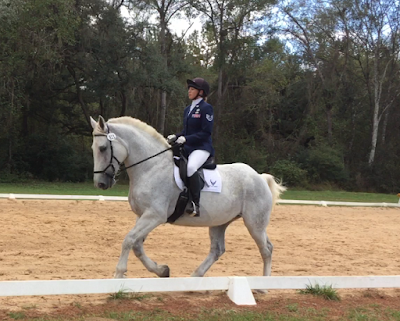 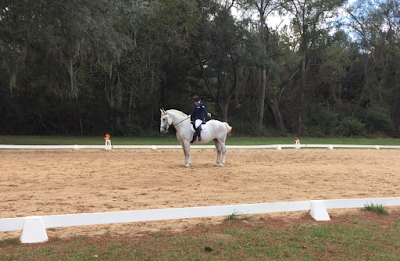 We had about an hour before our stadium round.  I was the most excited for this stadium round than I have ever been for stadium at any show in my life.  I have made some serious mental and physical adjustments in my stadium riding over the past nine months.  Just the past couple weeks we have been having the most confident jump schools we have ever had at 3'3".  It's not that 3'3" or stadium in general intimidates me, it was just our accuracy that was lacking and I went on an obsessive mission to fix it.  It started with the weekend that I took Klein to Orlando to the Grand Prix jumper rider/trainer's barn last February.

Also, I have found the sweet spot in bridle adjustments on her Micklem for both of her bits.  She LOVES that bridle.  I think that is hands down the best thing I have ever bought her.  She is through consistently in both dressage and jumper tack.  It is SO easy to keep her up and adjustable to fences, after fences, etc... 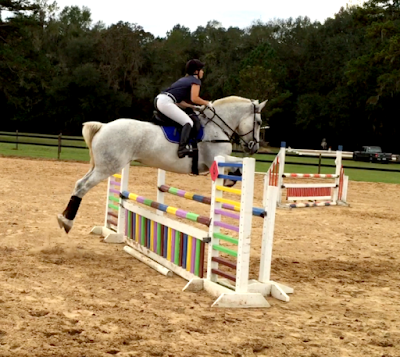 Our round was one of the best we have ever had.  We had a stop at the two stride because I didn't get her in where I should have.  I should have hit the gas pedal just a little because it was uphill, but I didn't and got her to a weird spot.  We circled and went through no problem.  That was 101% pilot error.  It's things like that where your horse is trying to teach you something, and hopefully you are listening.  I couldn't blame her a bit and couldn't have cared less.

Other than that she didn't come close to touching a thing.  I counted to every fence too which is another goal I set for myself.  It sounds dumb because that is what you are supposed to do, but most times counting would go right out the window for me and I am trying my hardest to fix that, and it worked. 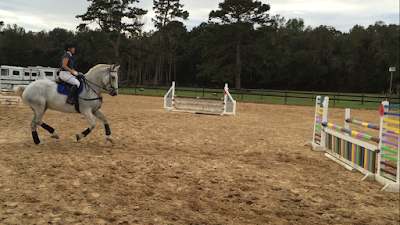 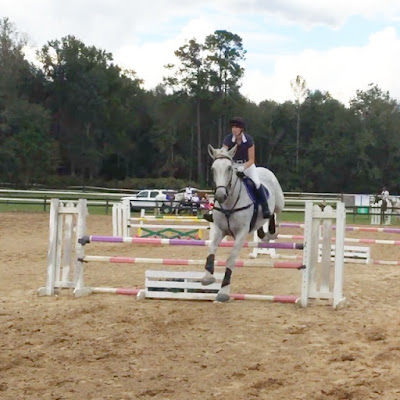 Overall, what a great day with The Odd Couple.  Mares for life!!!! 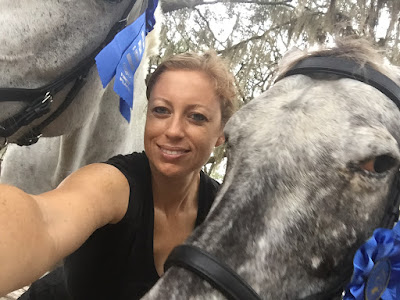 Failure.  I can barely get Klein's big head in the frame, let alone The Odd Couple together.


Stayed tuned for some super exciting news at the end of this week!!!!
Posted by The Jumping Percheron at 10:29 PM