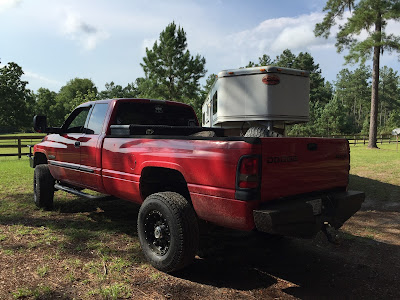 New Yokohama Geolandars for the Beast!


Most chain auto shops are shitty scam artists from what I have found.  Firestone is one of the worst I have dealt with.  I just wrote last month about the awesome shop I take the Beast to that is on the farm I buy my hay from for shows and other weekend horse trips.  I know Firestone sucks.  I know better than to take my truck there.  But, they are one block from my work and I am SO busy at work it is SO easy to drop the Beast off for something simple and all I have to do is walk a block to drop it off and pick it up.  The hay farm isn't far, it's only about 15 mins away but sometimes with my work I just can't fit in running back and forth.  Sometimes I don't have time to feed myself let alone do anything else not work related.  I mean, maybe if people would stop breaking federal law I would have some extra time at work but seeing as our case load only has continued to grow lately, I'd say that's not likely to happen.

I made the mistake of dropping the Beast off for an alignment last week at Firestone.  An alignment.  That's a simple, straightforward thing to do to a vehicle, you can't really mess it up.  Well unless you're Firestone and you don't even pull the truck into the shop.  An hour after I dropped it off they told me they didn't want to align it because it needed tires.  Well, that is true, it is tire time for the Beast, but they didn't even pull it into the shop to check the alignment on it.  Out of curiosity I had them quote me some tires.  Again, the tires would be on the next day and it would be painless, in theory.  Tires.  Another thing that is simple for a shop.  So a simple shop like Firestone shouldn't have a problem.

When you don't even know what tread depth is on a tire, I guess putting tires on a vehicle CAN be pretty difficult.  This guy was trying to not only sell me some van tires for my 3/4 diesel truck but then started to back track when I called him out on it.  He said there were two versions of the tire.  I started asking him the specs on the tire he was looking up and to tell me the tread depth (which I already knew because I looked it up myself).  This guy had no idea what tread depth was.  He said "What do you mean?"  Seriously?  YOU WORK AT A TIRE SHOP.  WTF DO YOU MEAN WHAT DO YOU MEAN??!?!  That shit tire he was trying to sell me also was rated 362lbs LESS than the tires I had on the Beast.  Why would you try to sell me anything rated LESS?  Again, 3/4 diesel, with a vanity horse plate and a goose neck hitch in the bed.  2 + 2, dumb ass.  At that point I was done.  There is no convenience worth the stupidity that works at Firestone.  It isn't just that one shop either.

I took my car to one in Alabama while I was there for a work trip for a new wheel bearing.  I know what a wheel bearing sounds like.  I knew my car had a bad bearing.  I dropped my car off, again because it was really close to work.  They talked to me like I was an idiot that was imagining things.  Yet when I called at the end of the day to see if they drove the car the guy said "Oh...um...well, no.  I don't know how to drive a 5 speed.  I was waiting for my co-worker to come back so he could drive it and I could ride with him."  *crickets*  I didn't know what to say.  How do you even get hired at a shop if you can't drive a manual???  They ended up replacing the bearing and doing a shitty job.  They actually didn't install something correctly because I took it to the other Firestone when I got home and they re-did the entire job for free.

Another time I caught Firestone in a lie about my car having adjustable rear bearings.  Once I took the Scion in for a bad bearing too (Toyotas eat wheel bearings in the front, I've had a Celica, Paseo, and Scion TC all do it).   I didn't even make it a block with the Scion before I turned around.  The car sounded like there was gravel in the brakes and my ABS was going off any time I touched the brakes.  They swore up and down they must have gotten a defective bearing and re-did that job the next day too.  I can't remember which Firestone misadventure it was, but I called them out on something and one of them just looked at me and said "how do you know that?!  Google??"  Actually I have this thing called a dad that owns a shop and builds race cars.

They also are ridiculous with their prices.  One morning on the way to CrossFit I ran over a HUGE racoon that came out of nowhere, and he rolled under the front end like a ninja and ran off too.  He busted my fog lights out of the front bumper and they punctured my AC condenser.  At first I thought it was my radiator so again, because Firestone is so close to work I dropped it off and they called me and said they had worse news, it was my AC condenser and it would be $490 to fix.  Ha.  Yeah.  Right.  I was like um, I'll be there by lunch to pick it up.  Their price quote had the AC condenser at $299, the other half found a brand new one straight from Denso for $60.  He ordered it, I dropped the Scion off at my awesome shop and it was $127 to install the condenser and recharge the AC.  So, $187 vs $490.

Back to the Beast.  That day I went to pick it up and told them to shove their van tires is when I noticed the Beast had not moved.  Sometimes I think it intimidates people and I can't figure out why.  Surely other trucks come in that are bigger than the Beast.  I have had a place actually not be able to pull it into a bay.  It took two guys.  The first guy gave up and had to have someone else pull the truck in.  It was ridiculous.  What do they do when a dually comes in????  Once I took it to a detail shop and the guys refused to move it, they made me pull it through the line.

Anyway, lesson learned.  I will never, ever betray my awesome shop again.  Since it was tire time anyway, I ordered my tires myself and had my awesome shop put them on the other day.  Firestone wanted $1126 for f'ing van tires.  I bought some really nice tires and after a little searching found a great deal.  I got them for $816 delivered to my door and it was $80 to mount and balance them.  So $896 out the door for tires ten times better than the shit Firestone was trying to sell.  The Beast is riding like a Caddy on those new tires!  I can't wait to hook the trailer up.  It hauled nice before, I can't wait to see how it feels now.

Moral of the story, do your homework, learn about the vehicles you drive, ESPECIALLY the one you haul your horses with!

Posted by The Jumping Percheron at 8:32 PM