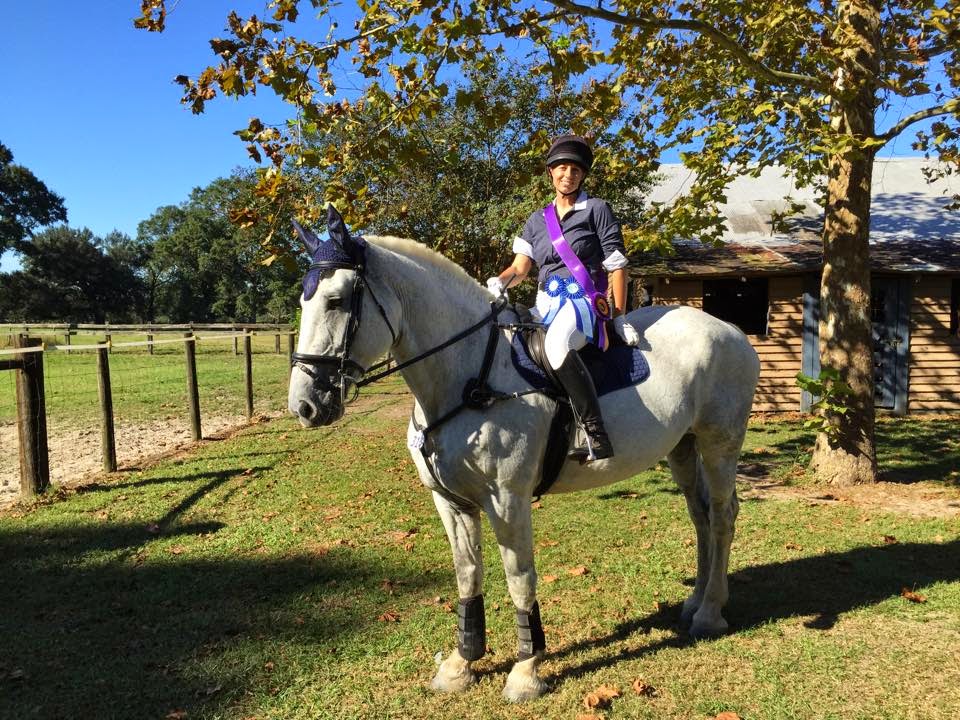 Klein and I went to a combined training show yesterday and competed in the Novice and Training CT.  She was first in both and AA CT Champ.

It actually was a bit of a rough week and I was glad we made it to the show.  I was looking forward to a fun day with my girl after finally breaking the streak of not giving any f's about shows anymore.  She has been going nicely lately, and it's not so insanely hot anymore that I feel like I am committing animal abuse by hauling horses.

Then...early last week Klein came in with a fat rear left leg.  I was disappointed because I really was looking forward to the weekend and anything like that is completely out of character for Klein.  She doesn't fight or kick things, or act crazy, well...that I have ever seen except for one paint mare she hated a few years ago.  So what could she have gotten into?  Anyone that owns a horse knows that the possibilities are endless.  She wasn't off, it wasn't hot, and she could not have cared less if I was messing with that leg.  Clearly it was just swelling and nothing else going on. 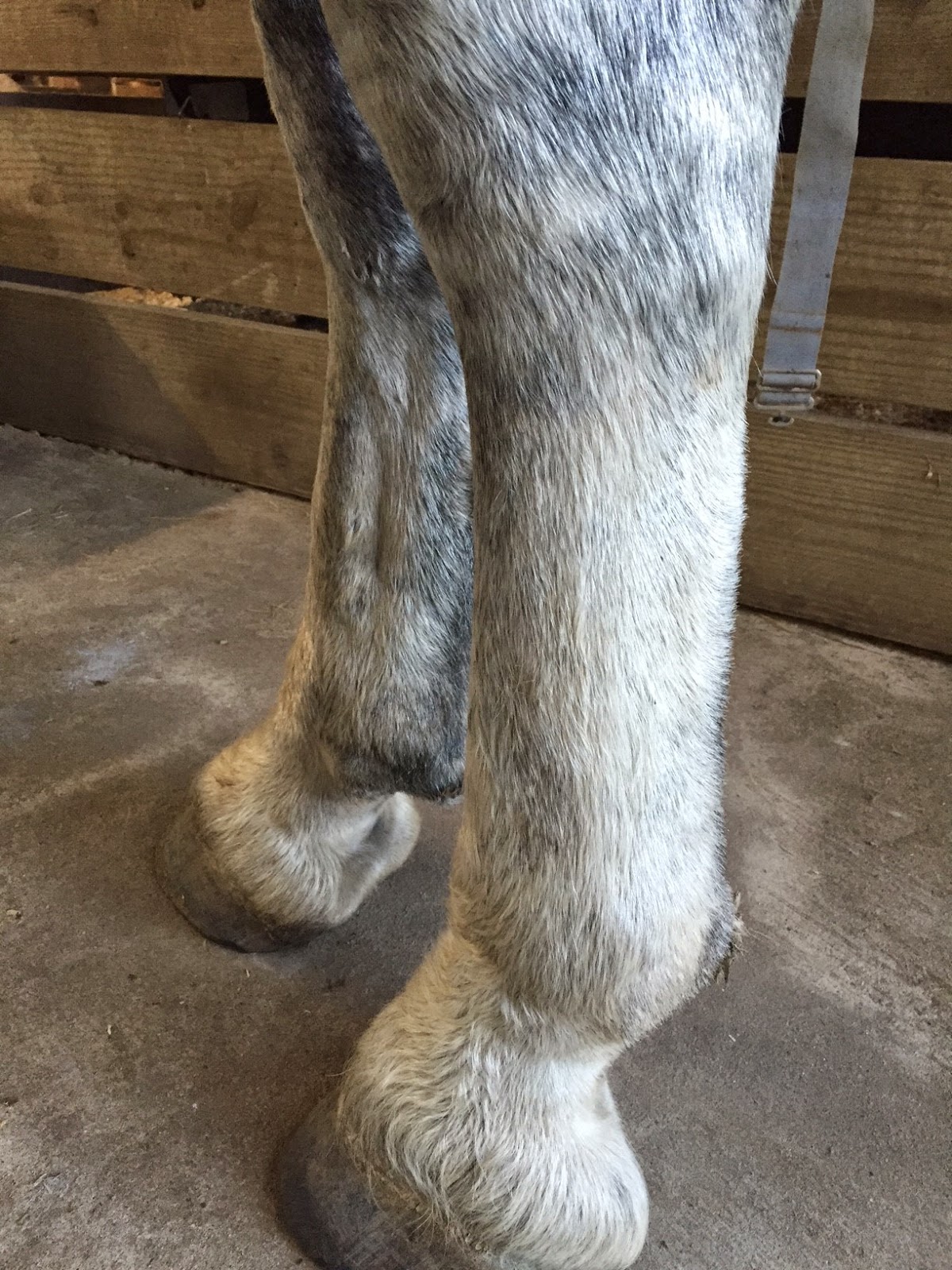 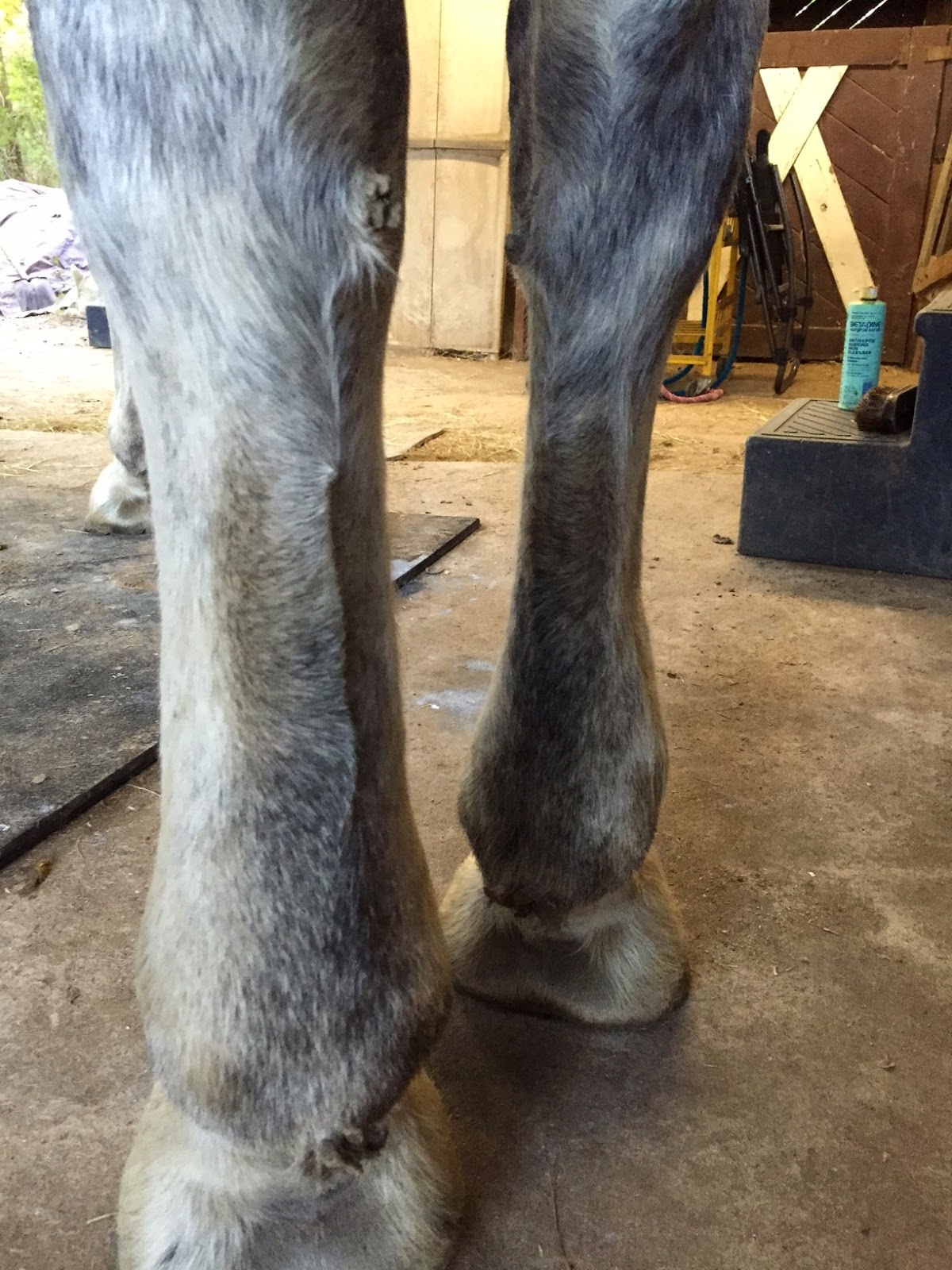 Out of the millions of possible causes one thing my vet suggested was an allergic reaction.  But...to what?  The next day she came in and her other three legs were beginning to fill.  That's when I knew it was an allergic reaction.  What had changed in her pasture????  A round bale.  The grass is still green here but it is starting to slow on growth.  The first round bale of the year was just put out a week ago.  That is the ONLY change in her environment.  Also, another mare in Klein's pasture had a round of colic the first morning after that round bale was put out.  That mare has a history of colic around this time of year so it seemed like it was her yearly colic.  Now, I really suspect that round bale.  I went out looking closely at the rest of the mares and another mare had stocked up in both fronts.  I was SURE at that point it was that damn round bale.  They must have rolled up some kind of weed in it.  There were two other round bales on the property that came in the same load as the one in the mare pasture, Klein had been eating off of one with no issues so it was not every bale, just that one for the mares.  Dex + a sweat on all four legs + putting Klein in another pasture = legs back to normal the next morning.  Relief!!!

The next obstacle?  Loading Klein yesterday morning.  Klein usually loads with no problem.  The past two weekends I have hauled her somewhere and she always goes right on in about one minute.  Not yesterday morning.  She wanted to go out into her normal pasture.  Both her and Mochi had been in a different pasture for the previous couple nights to stay off that round bale.  Moch was unaffected by it btw.  Klein has never been herd sour, ever and when she is out with the mares she is usually off by herself, so I was a little confused on why she was so intent on wanting to go out to her normal pasture like she actually cared about it.  She had a meltdown about loading.  She was being completely disrespectful.  Ridiculous how they can throw such a big fit then walk on nicely.

So, we made it, and we had a great time! 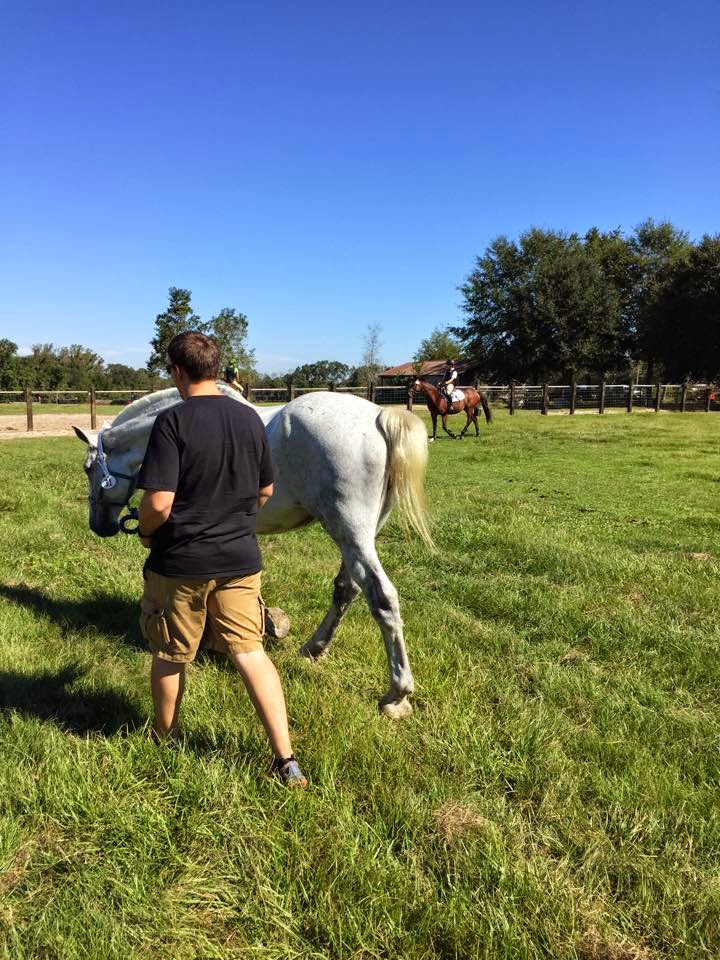 Klein showing the other half where the good grass is.

First up was our Novice dressage test.  I had a hard time getting her to concentrate during our warm up.  We definitely were not at our best.  I felt like she was a bit laggy but after our rough start that morning and her seeming to be pouting a little when we first got there, I couldn't really blame her.  No big deal, just a day to have fun with my girl. 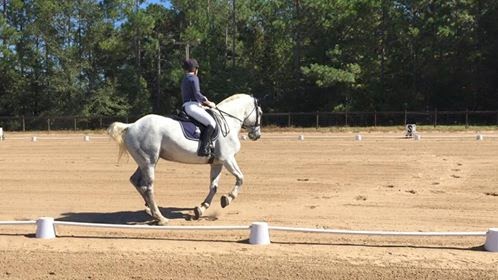 Our Training test was shortly after our first test.  This time I rode with my whip and I feel like that wasn't the best idea.  Klein was bracing and slightly running from it the whole time.  She is so sensitive and easily offended by it.  I never even touched her with it.  All I have to do is have it in my hand!  We did have one noticeably sloppy down transition, the last one from canter to trot right before you turn up the center line again.  I felt we did decent on the Novice test but I definitely didn't feel like our Training test was up to par.  We ended up with a 30.43 on Novice and a 38.1 on Training.  We have gotten a 30.1 on Training before so, I know we can do better but considering we haven't competed in two years and the stress of the morning, we're totally cool with that 38.1!  I was proud of my girl as usual. 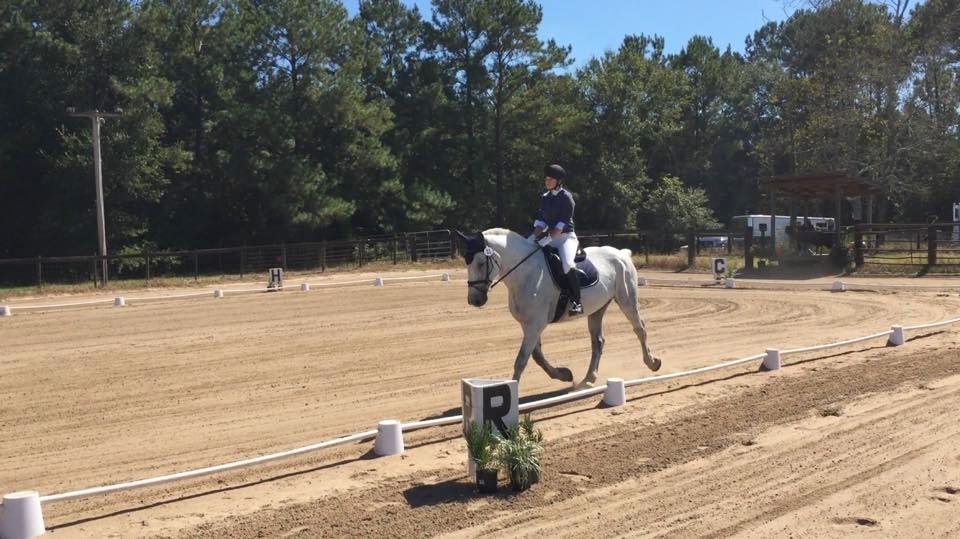 The judge was not a fan of us from what I gathered from our comments.  Usually there are at least one or two positive comments, but we had none.  That is probably the first dressage test we have ever rode where the comments were all negative.  I can appreciate that though, that makes our homework crystal clear and I can't wait to hand them to our dressage instructor that we'll be riding with again here in the next week or so. 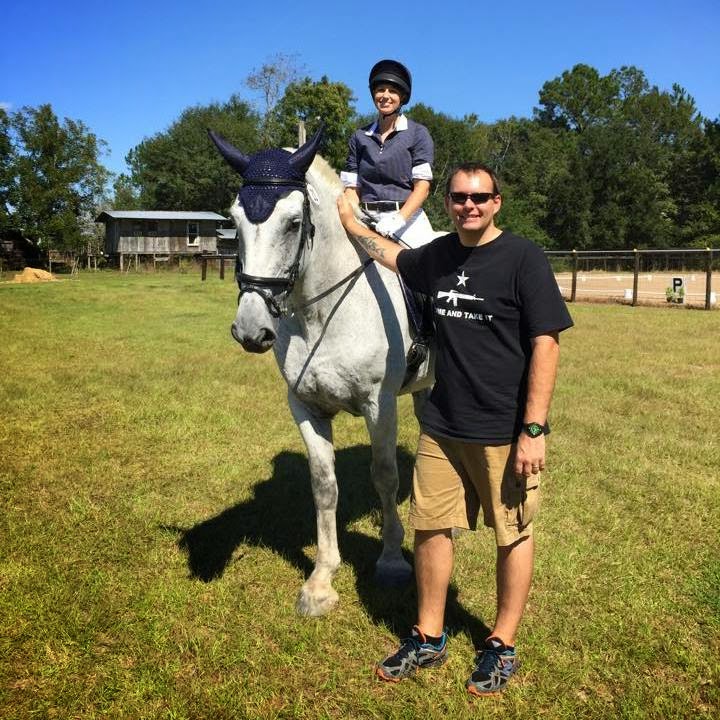 After dressage.  I love this pic! 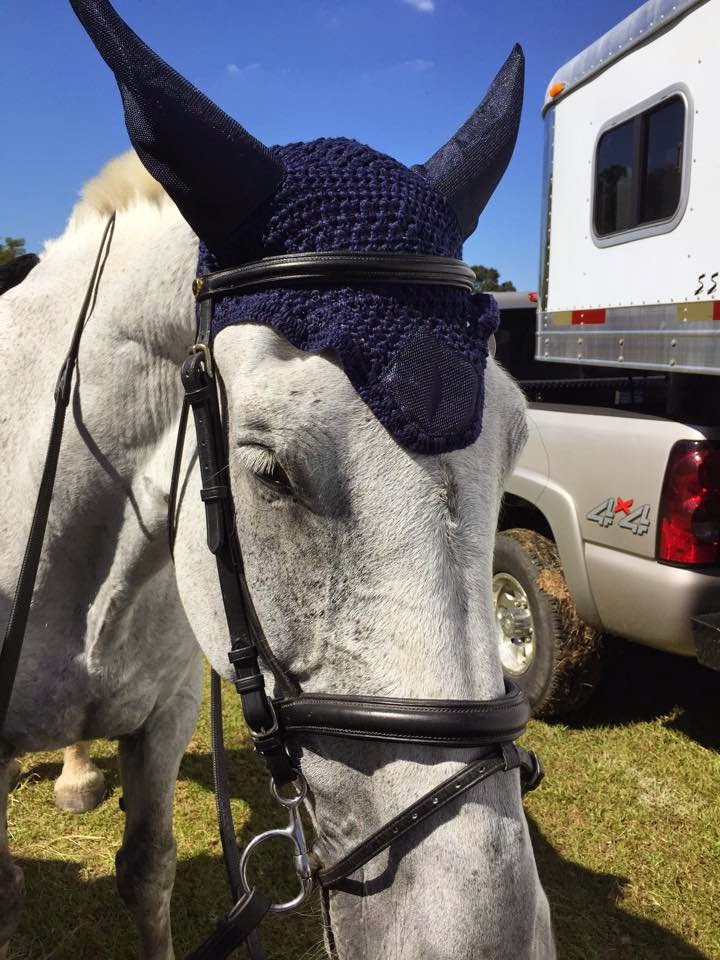 During our break before stadium the other half was busy being the Best Horse Dad Ever. 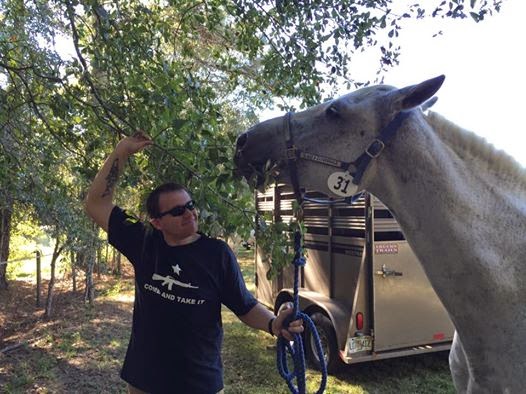 Her wish is his command. 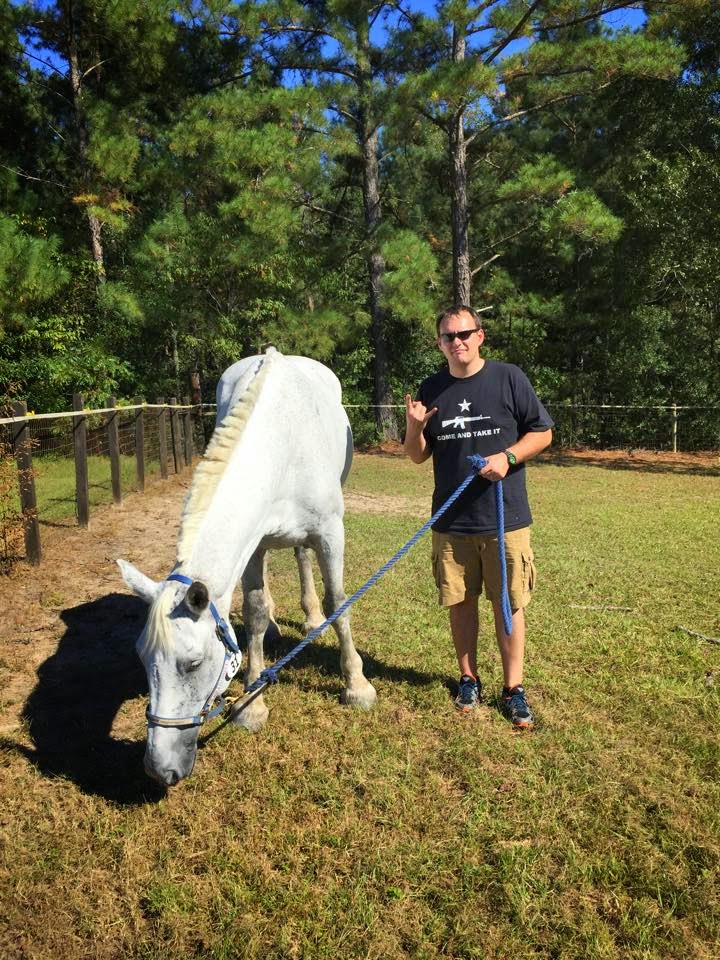 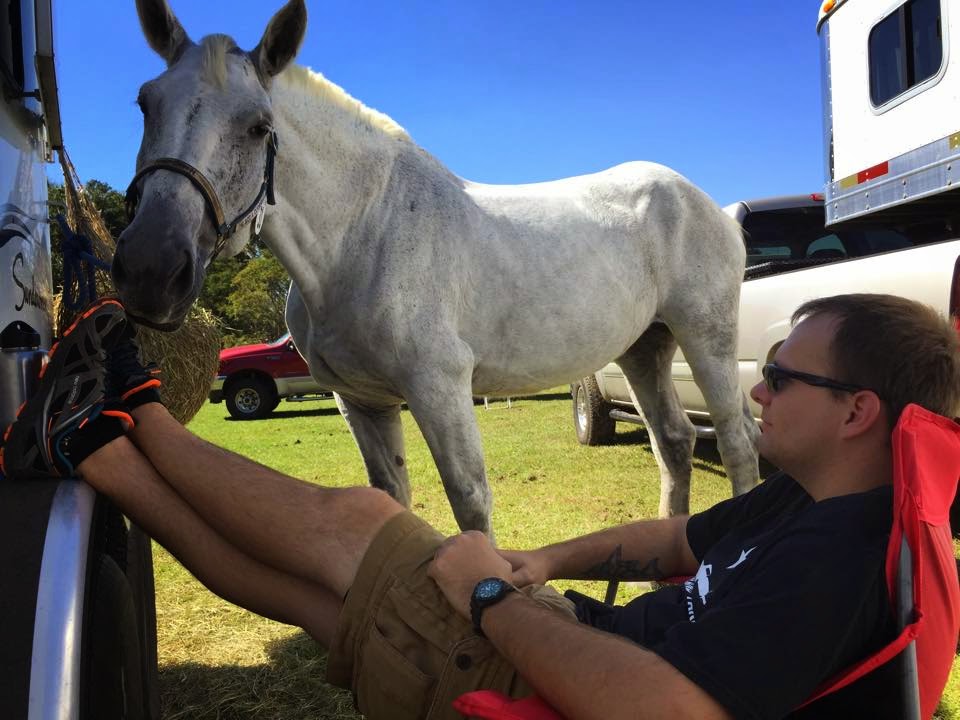 Hanging out with her dad.

Every time I see her doing something with him like the picture above it just amazes me.  She is just SO SO SO particular with the humans she will acknowledge.  She isn't rude or disrespectful if for example my barn owner brings her in, but she just will not go out of her way to interact with other humans besides me.  For example, a young rider came up to pet her nose while we were waiting for stadium and Klein immediately pulled her face away before the girl could touch her nose like "Back up off me!"  But the other half, she LOVES him.

Stadium.  First I almost forgot I was doing 3' and 3'3" and was going to wait until I saw another rider I knew was going in the 3'3" stadium come and get her horse.  That's when I remembered I was doing Training...AND Novice.  Haha, so I tacked up and headed down to the warm up just in time for the last rider from the BN stadium to come out of the ring.  We had a five minute warm up that included a little trot, a short canter, and two jumps over a vertical.

She went double clear in both rounds.  She did land on the wrong lead a couple times which is unusual but I'm sure it was more my piloting than her doing something wrong.  But, luckily, for us, this is stadium and wrong lead or not she didn't touch a thing in either round. 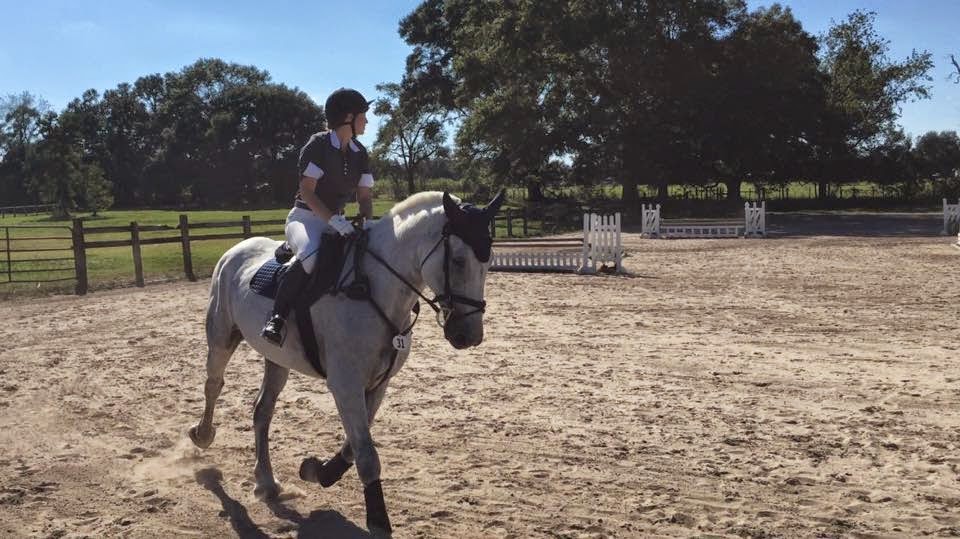 Planning our attack on stadium. 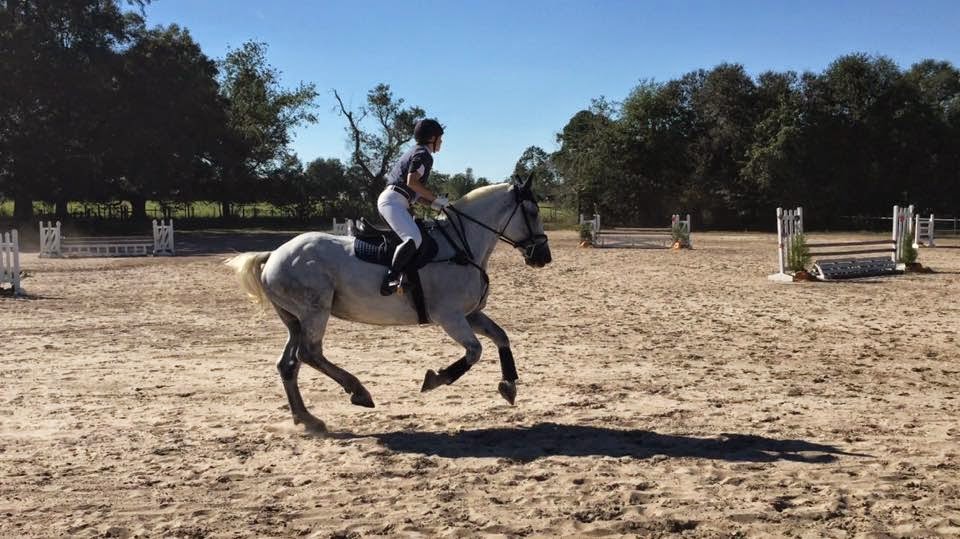 Doing work in the stadium ring. 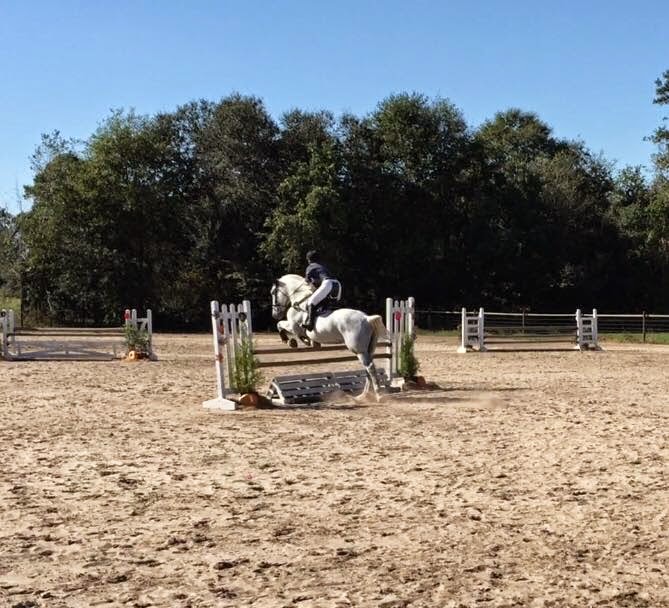 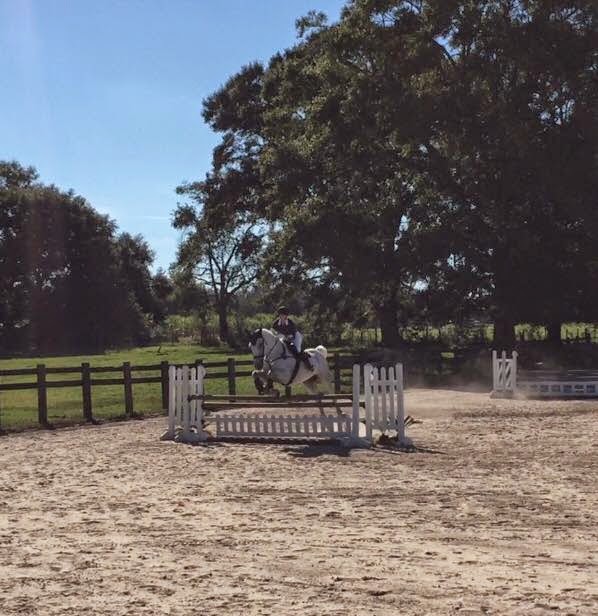 Oh you know, just doing what a Klein mare does. 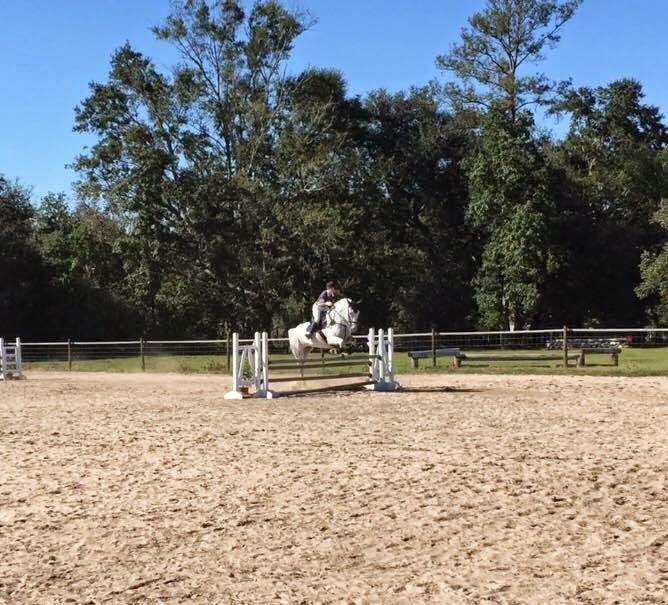 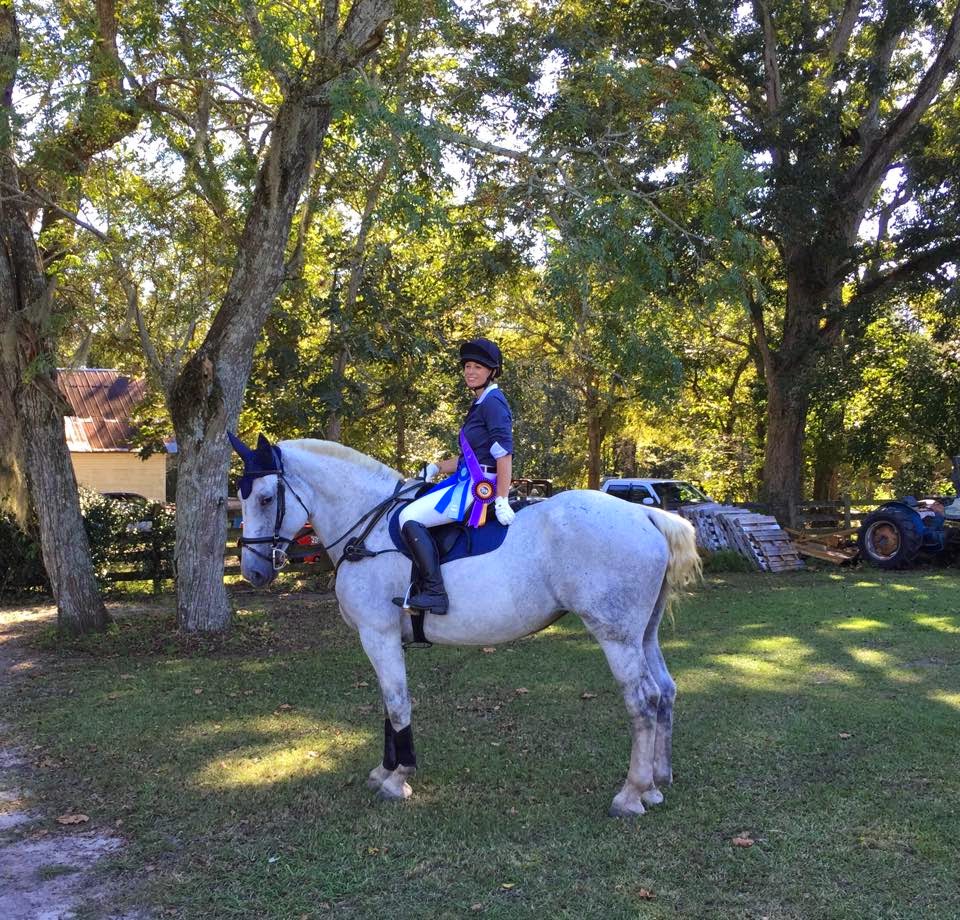 I love this pic because of Klein's expression.

Funny, a friend at the show said "Hey!  That ribbon is for her, not you!" about our neck ribbon and I told her "yeah...except her neck is too big for it!"  Percheron problems...

Looking forward to the next one!
Posted by The Jumping Percheron at 10:21 PM