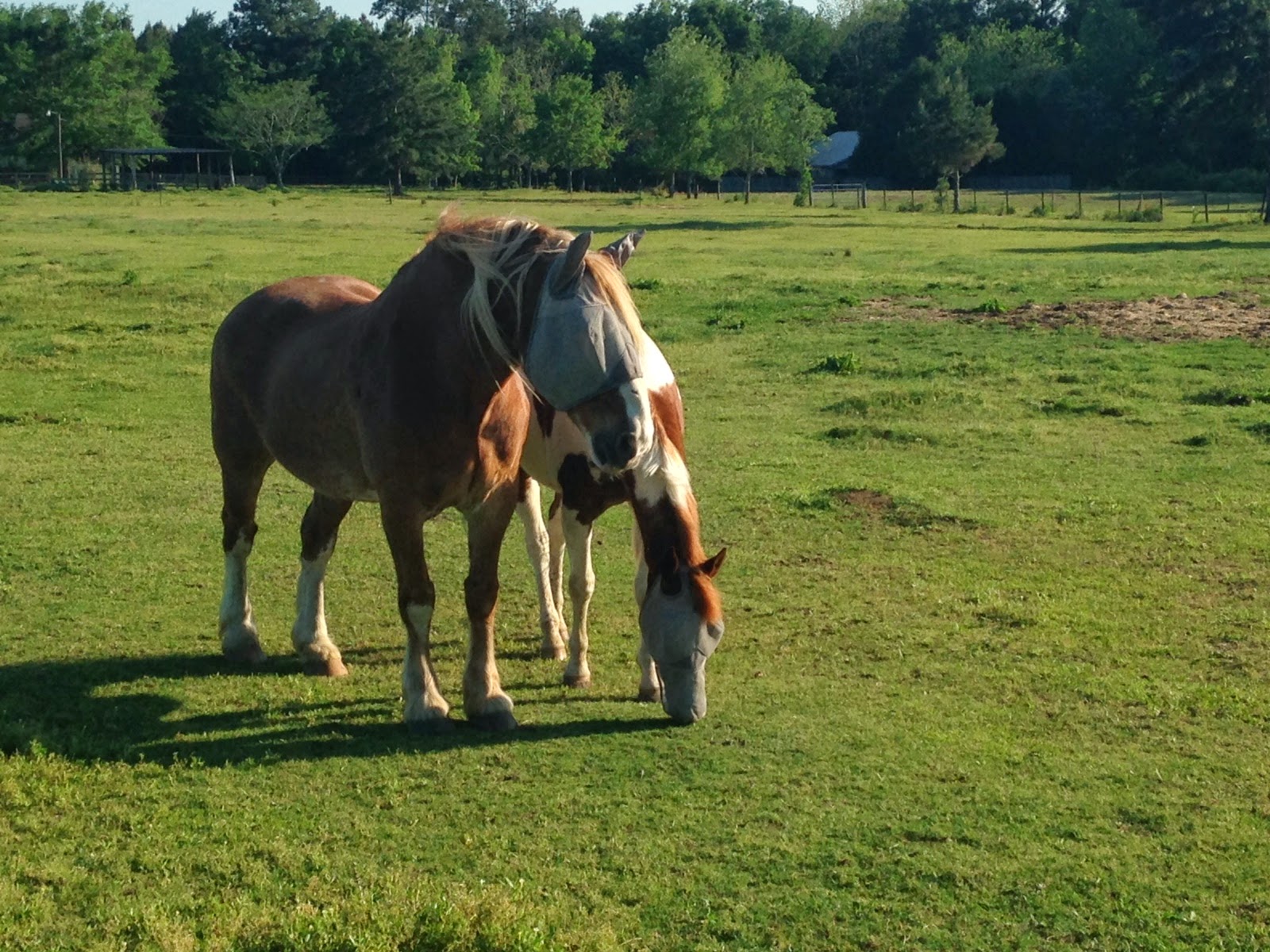 Wes and his BFF Rudy.

First, sorry for the delay in posting!  I have been busy with work, finishing up another class, and I was out of town for the past week because I had PRK laser eye surgery.  Only certain Air Force bases have refractive surgery centers so I had to travel to the nearest one to have PRK.  By the way, if you have ever considered PRK, DO IT!!!  It was an awesome, pain-free experience.  I went from 20/400 to 20/30 in 25 seconds, and I will completely heal to 20/20 or 20/15.  It was amazing.  When I laid down under the laser I couldn't even see the doctor and nurses faces'.  In less than ten minutes both eyes were done and when I sat up I could see EVERYTHING!  I have worn glasses since I was 12 and contacts since I was 15.  Even though recovery was easy I still stayed off of my computer last week just to let my eyes rest and recover from surgery.

A couple weeks ago our DAEP was out to trim Wes.  This was his third trim with her, and man what a success this transition to barefoot has been.

First, let me show you what I found when I got to the barn that morning.  I look out in the pasture and Wes has EVERY SINGLE MARE on the property standing in front of him.  I was dying laughing!!! 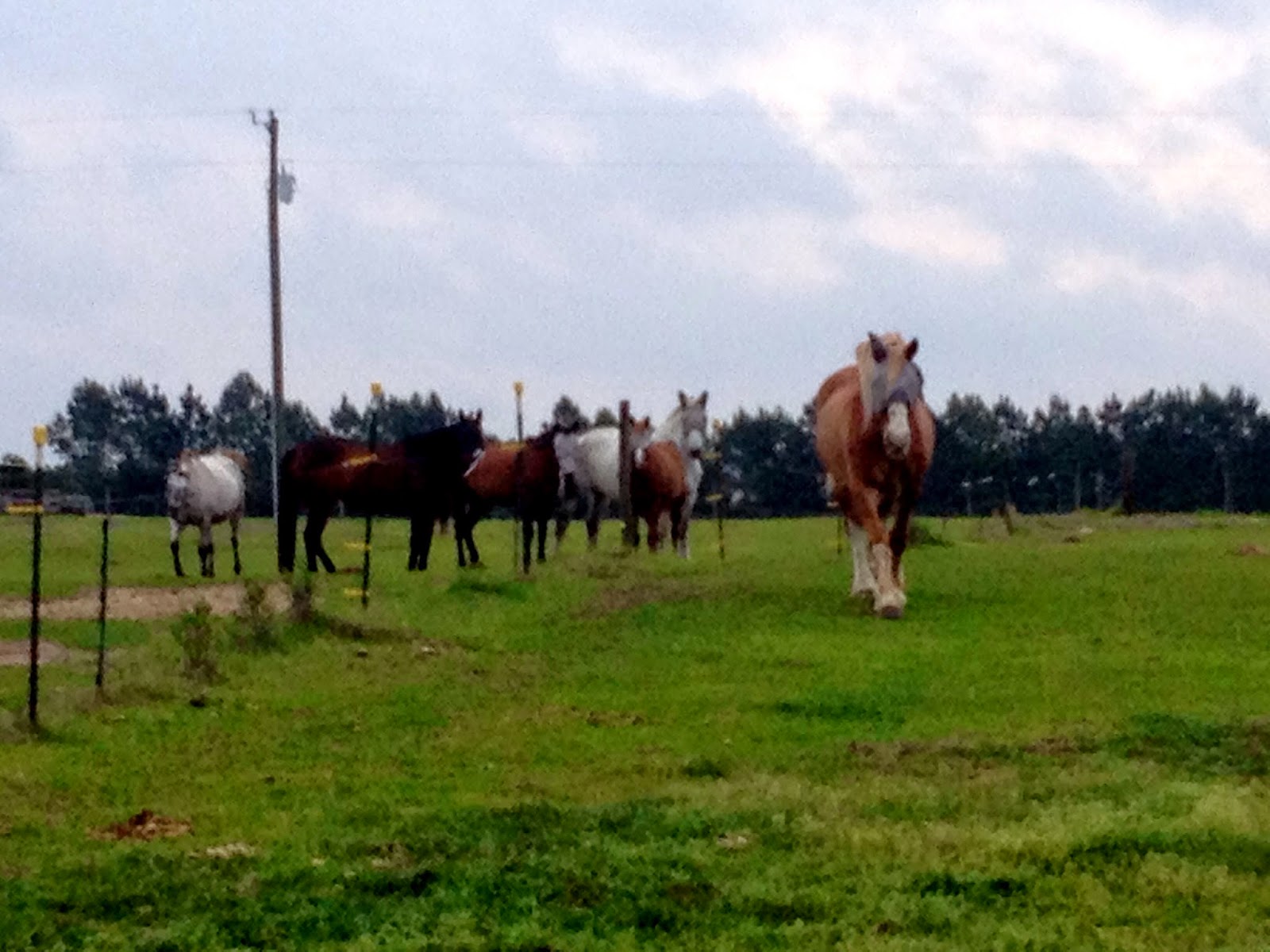 All those mares, and he still turns to walk to me.  That's right, that's even Klein up there!!!!

Back to our trim, let's check out some comparison pictures.  Obviously the left side picture is of when he first arrived home, shod all the way around and had been shod for well over the past ten years (click the pics to enlarge).

That left hind was his ugliest foot.  It's now starting to look like it belongs with the other three! 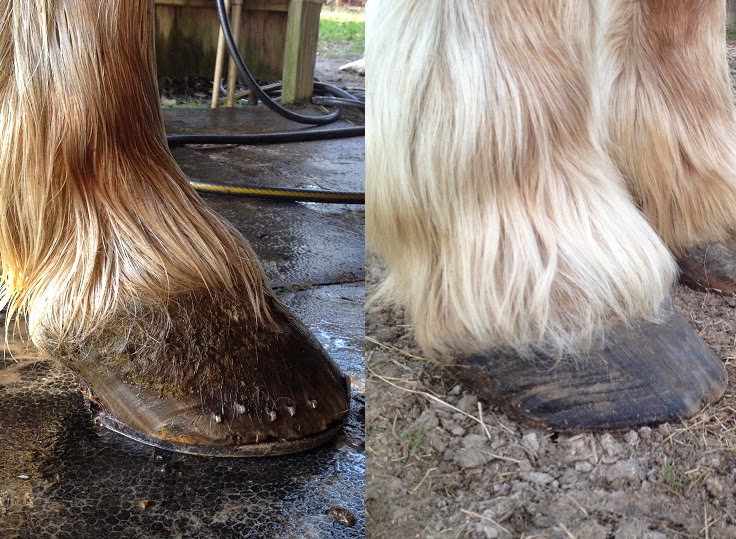 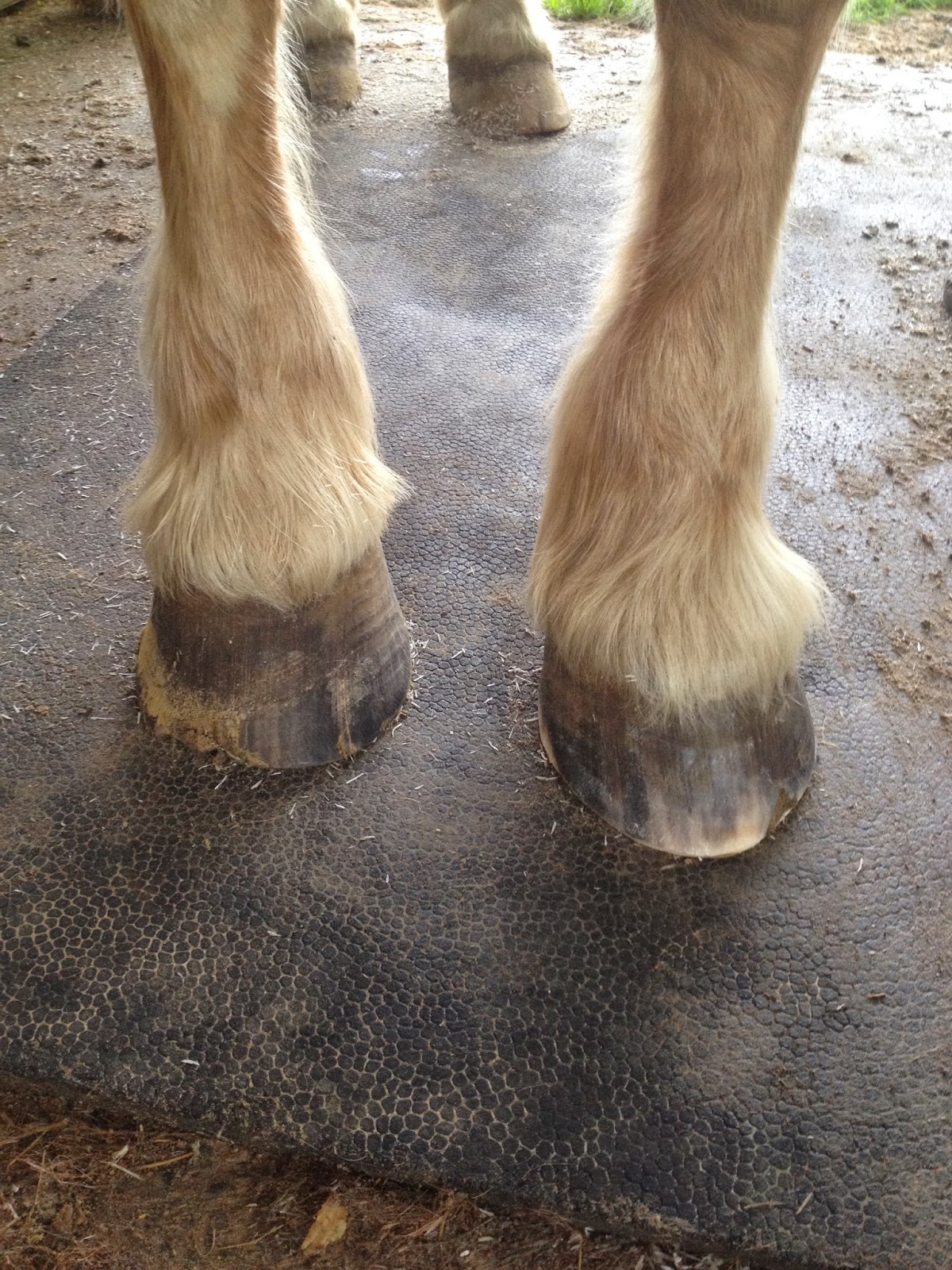 His feet have been loving their new found freedom out of shoes and are growing like crazy!!!!  Unfinished vs. finished front from his third trim. 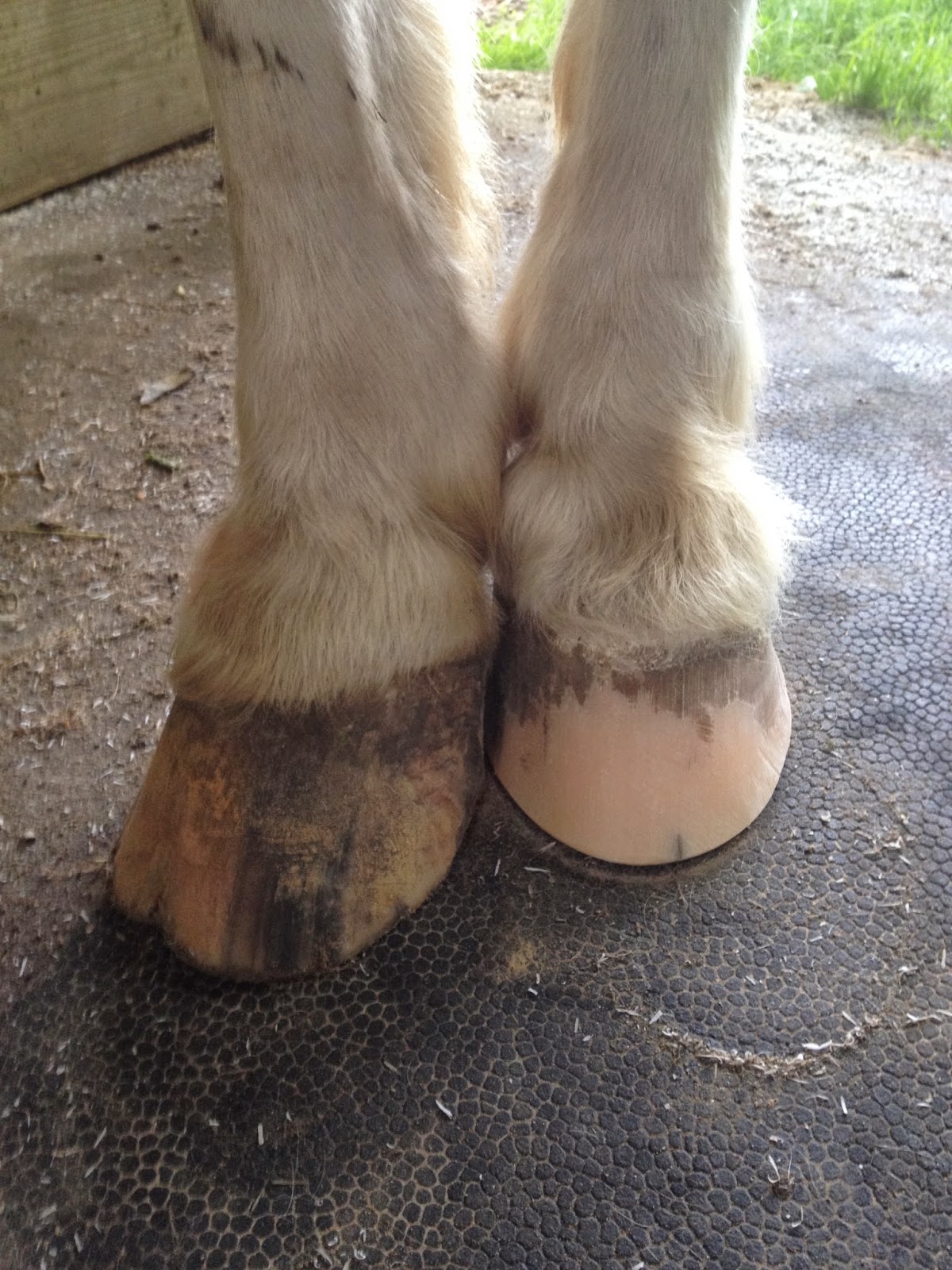 Again, unfinished vs. finished from his third trim.  And that is even his crazy left hind that looks all beautified and normal in this pic!

His feet are doing interesting things.  They really are remodeling themselves and responding to their new surroundings as well as the lack of being shod.  Check THIS out... 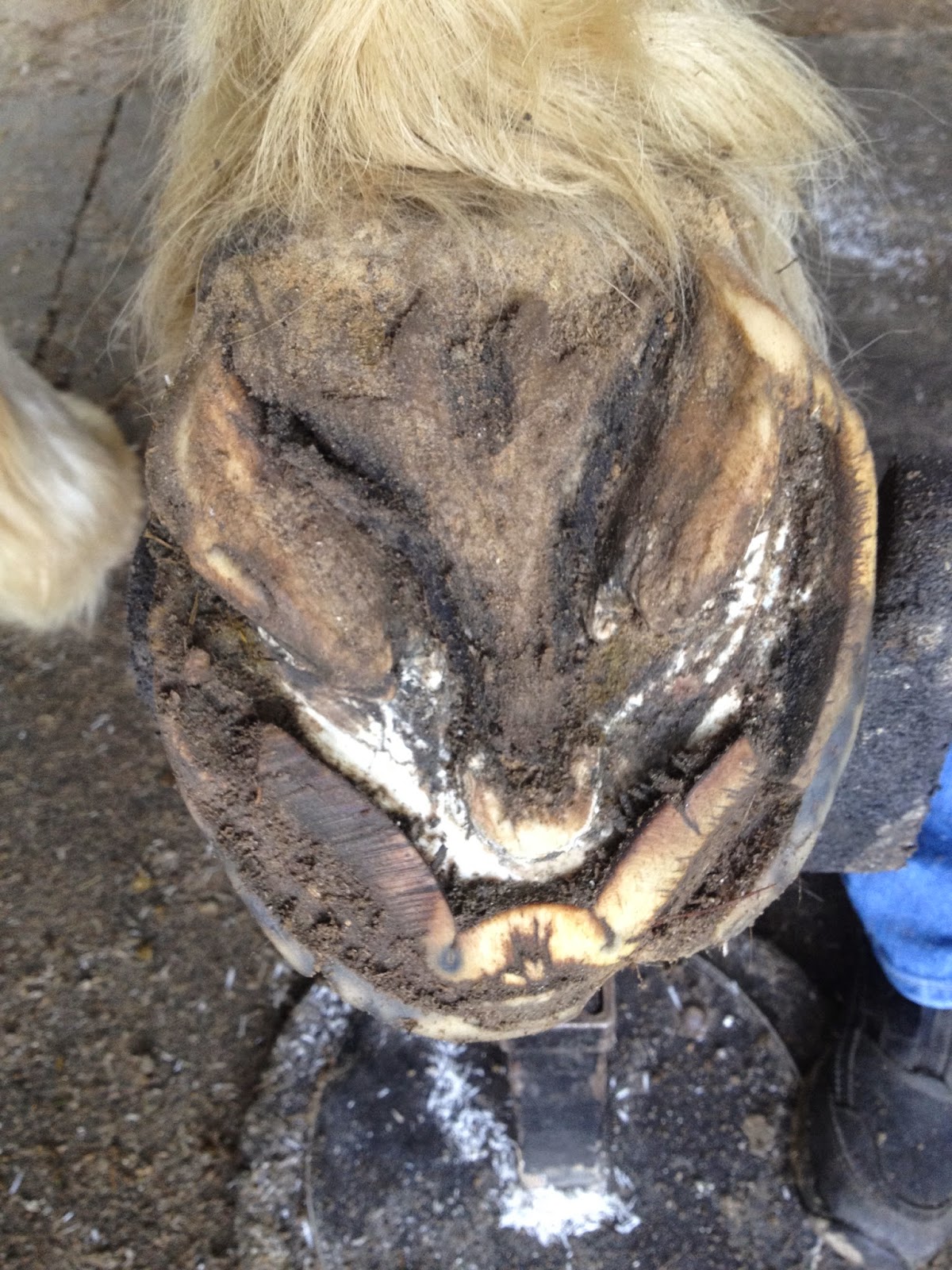 His feet are basically getting rid of their weak structure while at the same time moving his toe back where it should be and growing in nice, tight hoof.  This is also from his third trim, obviously before Cindy worked her magic.  You would think there's an issue here and there's some kind of mutant foot under there, but there really isn't. 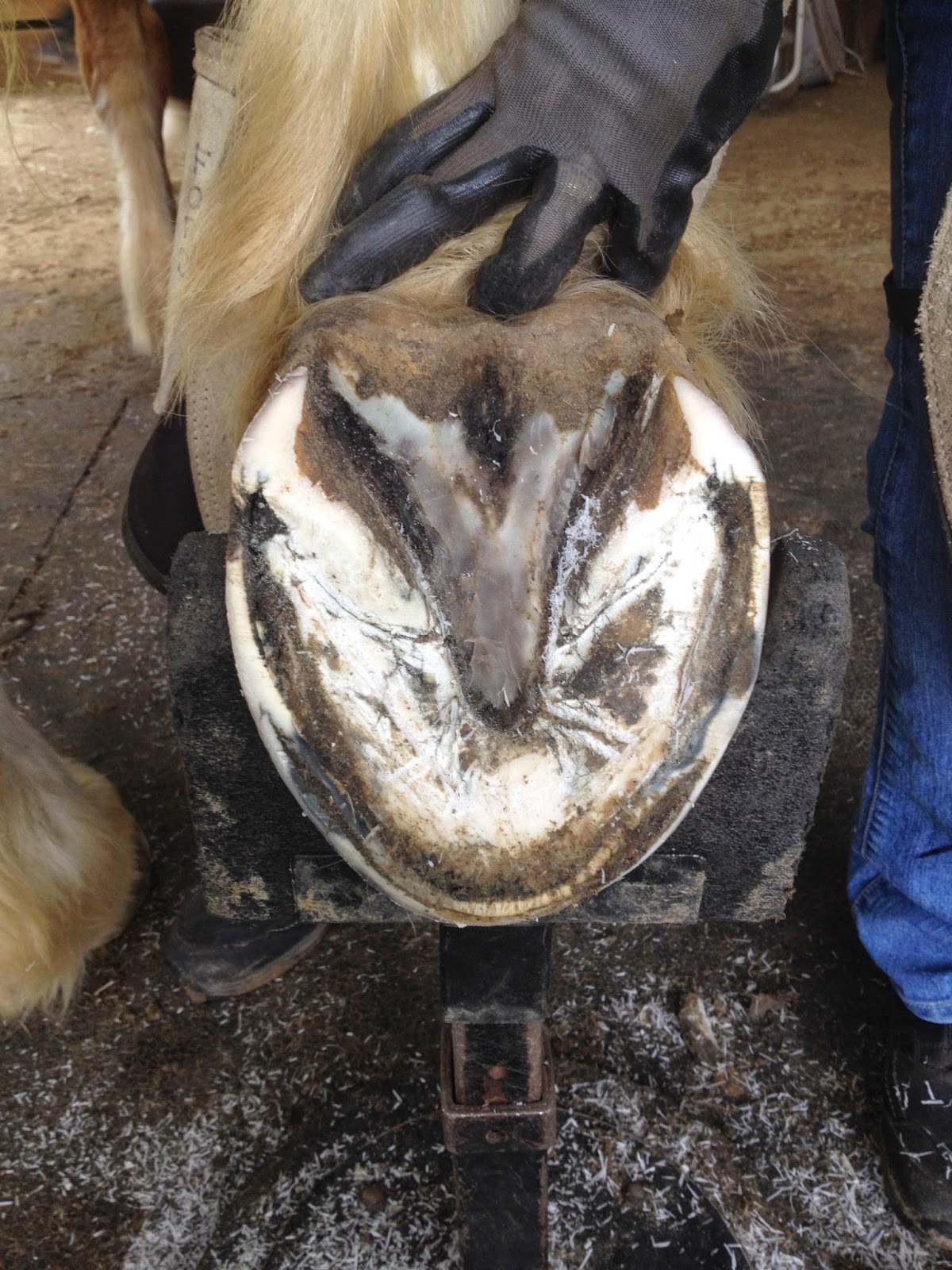 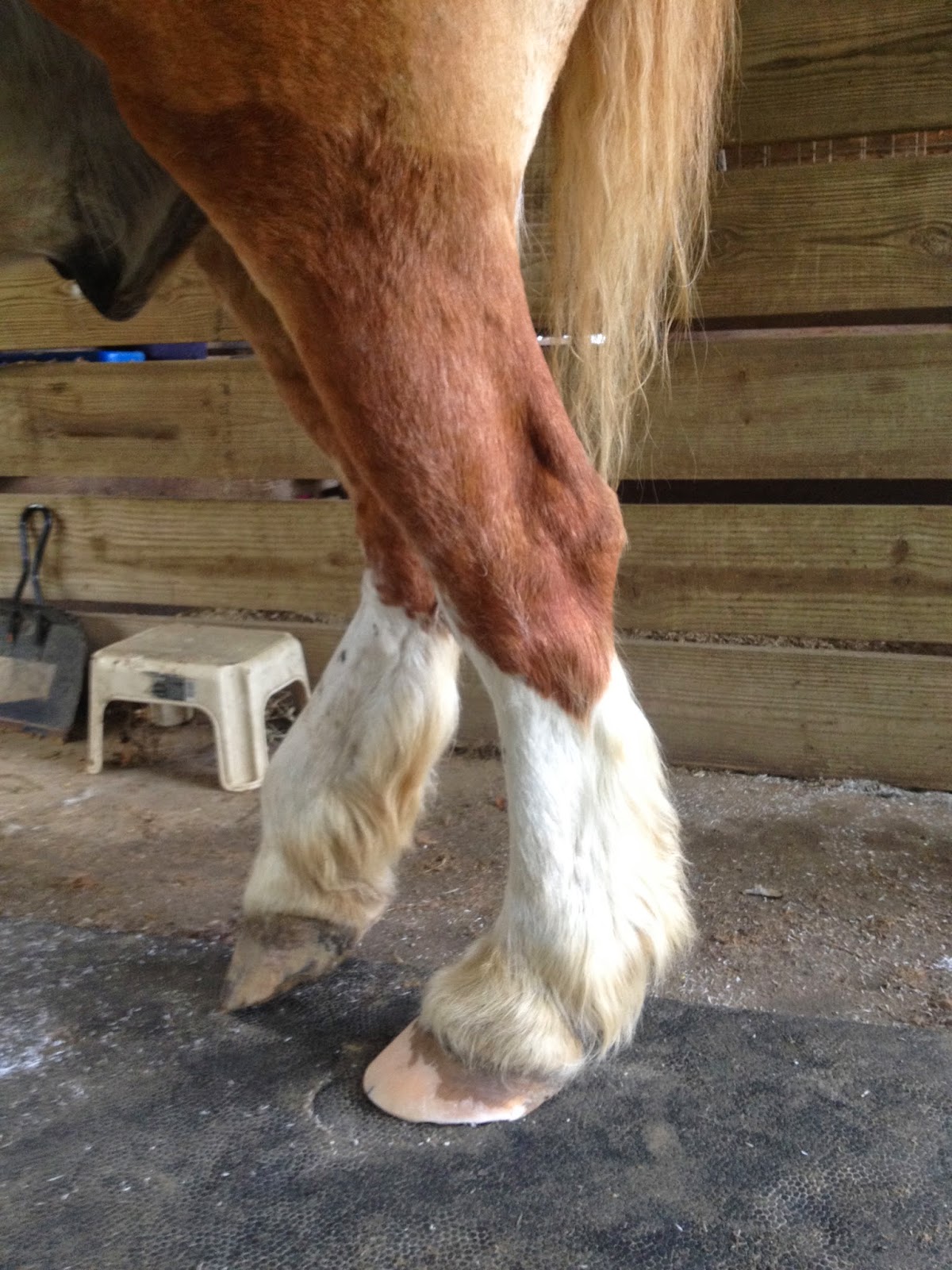 There it is again, that left hind that was once so ugly.  Wes is even standing and walking straighter.

Part of the reason Wes' feet are doing so well is that we have an extremely educated Degreed Applied Equine Podiatrist (Cindy Ford).  She is a real barefoot trimmer, not someone that thinks a barefoot trim is trimming a horse like a shoe was going to go on, then just not putting the shoe on.  She has Wes' feet in check, obviously.  He has yet to take a lame step.  He hasn't been sore one bit, which to be honest I expected, but it hasn't happened.

Before I left we had some great hacks.  We went out for the first time with another horse.  I thought Wes would be a follower but he was out in front the whole time and power walking the whole way. 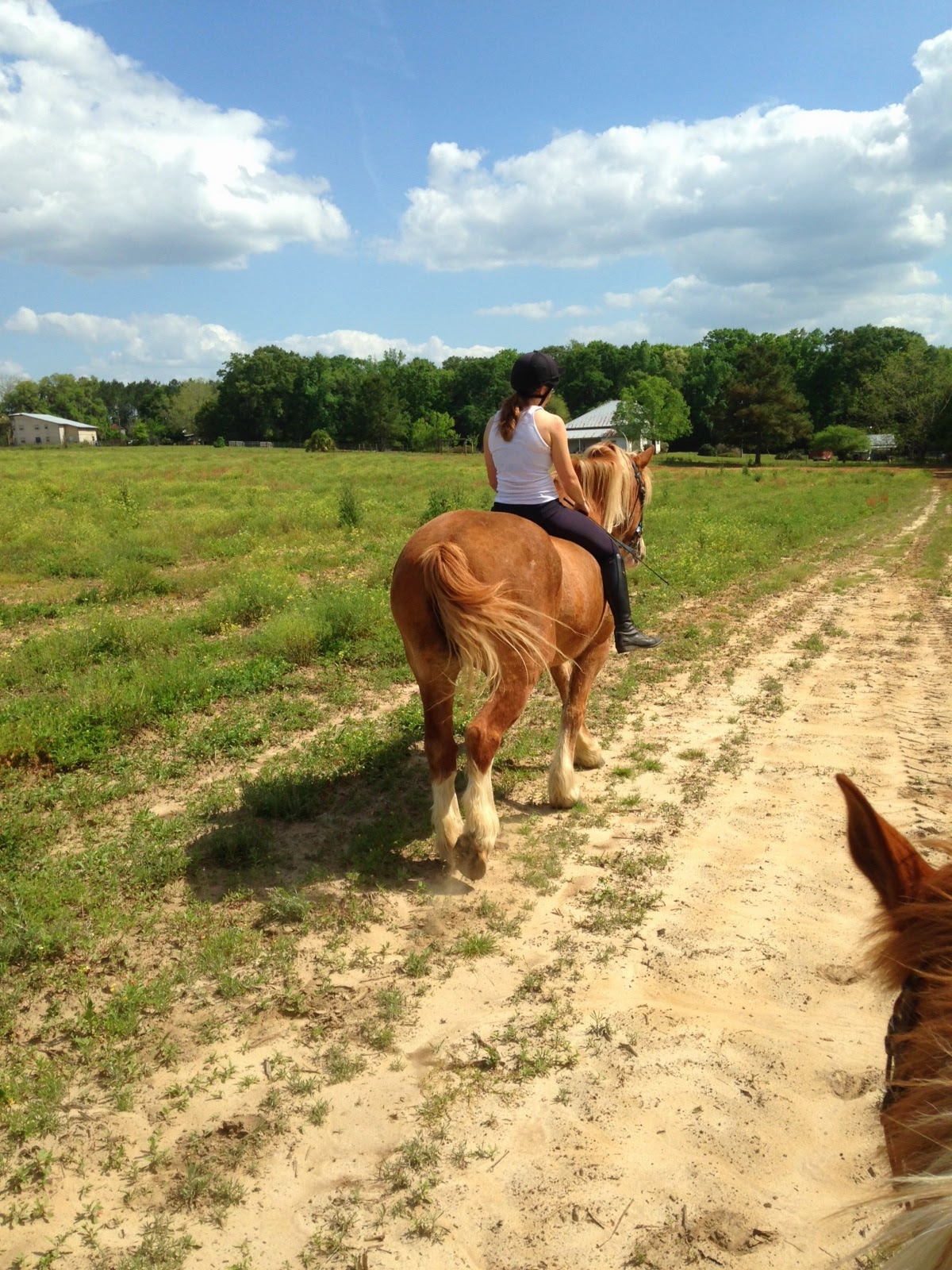 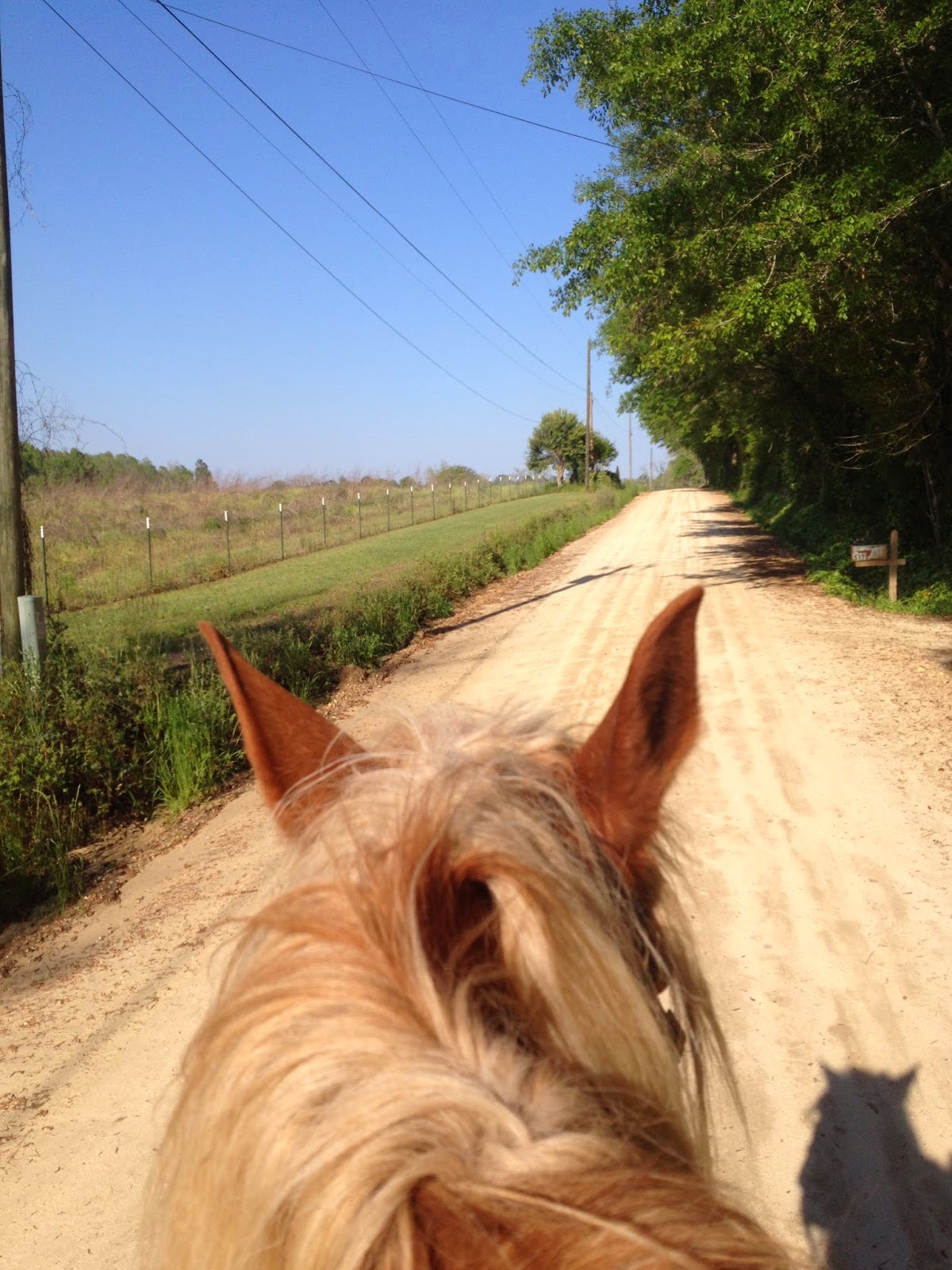 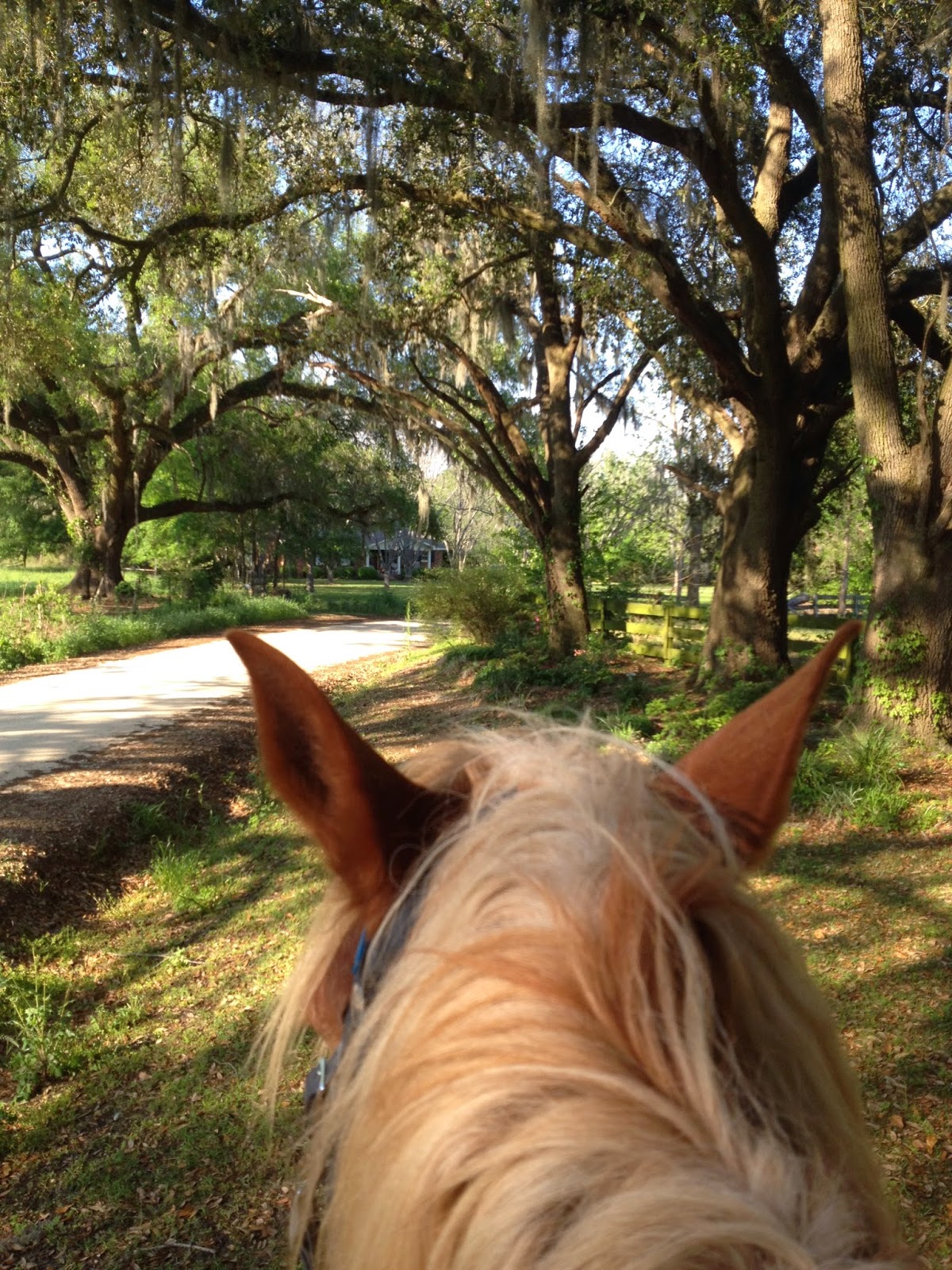 On one of our hacks Wes and I ran across some people coming up the road on a golf cart.  Wes just couldn't figure out what it was.  They saw him stop and perk his ears.  I let him stand there for a minute to see if he would calm down but he was totally not convinced that thing didn't eat Belgian draft horses.  I asked him to walk on and he was hesitant.  This was a gas powered golf cart so when the people started it the noise really got his attention too.  He took a few hesitant steps then jumped forward and did a 180 with me.  He flipped around so he could still make sure he knew where it was even though we were past it.  At this point I could feel him shaking underneath me.  From there we calmly continued our walk home.

I felt really bad for him because that is the second time I have ever seen him genuinely scared of something.  The other time was once at work on the streets in down town Salt Lake. Some guy carrying a snowboard on his shoulders freaked him out.  I could see the whites of his eyes over his blinders.  This just goes to show, complacency kills.  A couple people that I told the golf cart story too said something like "Wow, that's surprising for a carriage horse that used to work in a downtown area for so many years, you would have think he has seen it all."  He has seen it all.  But that doesn't mean he still can't find something scary.  He's a horse.  Prey animals people, fight or flight, remember?  There aren't golf carts driving up and down the streets of Salt Lake City.  There are trains and cars.  If we came across a train track and a freight train came by I'm fairly confident Wes wouldn't care.  Despite that, I will never ever for a second think that just because of Wes' past that he's completely fearless.  That's when I'll get hurt.  Sure, on a scale of 0-10, 0 being bombproof and 10 being hot, I'd give Wes a 2.  But that's still a 2, not a 0.  The day you think you have a 0, is the day the clock starts the countdown until you get hurt.  Klein and Wes are both very respectful of my space and they're quiet in the cross ties but if you ever think I don't know exactly where my feet are and their feet are, you'd be wrong. 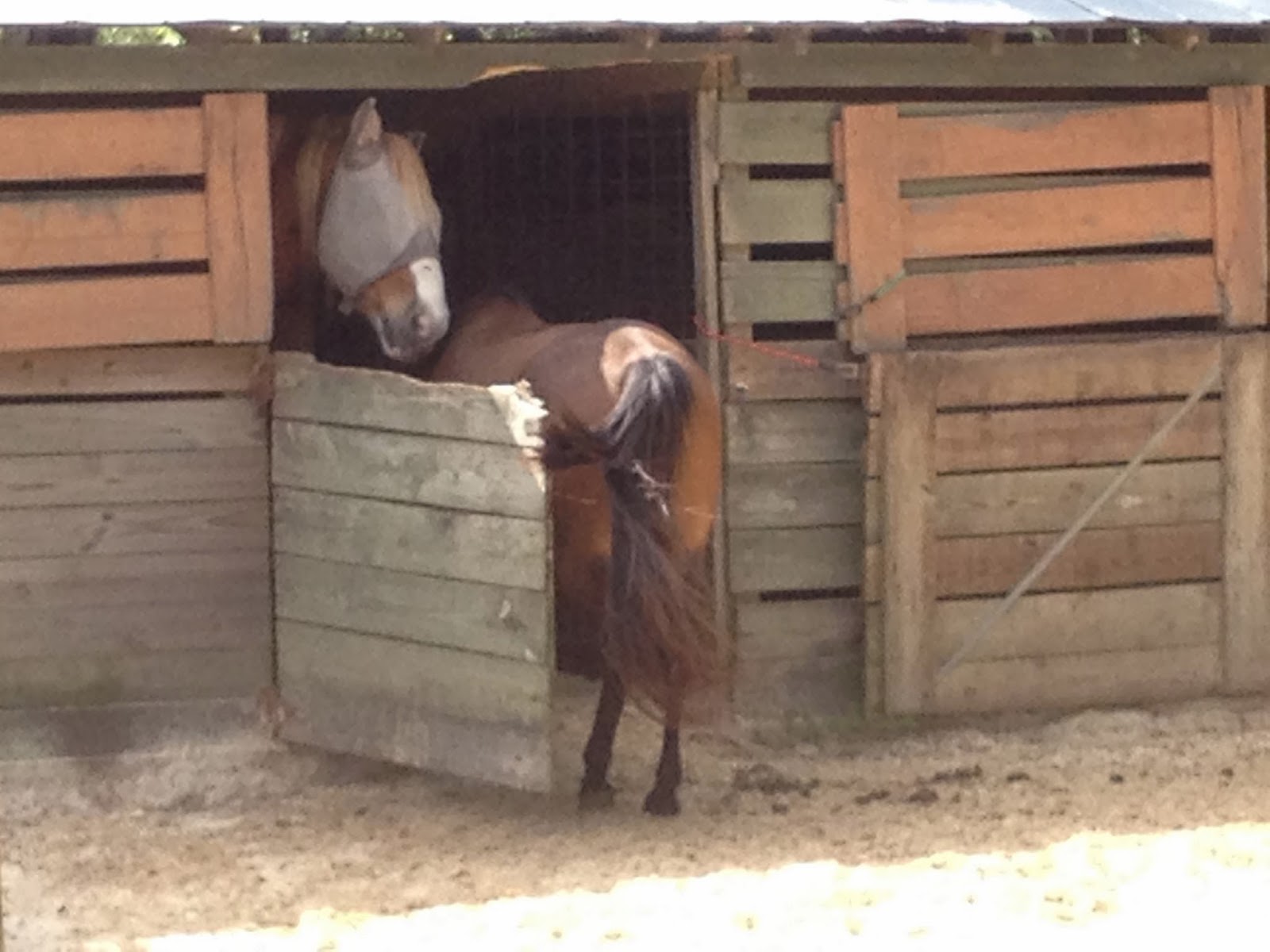 Wes and Jet.  They ALWAYS have to hang out in a stall together. 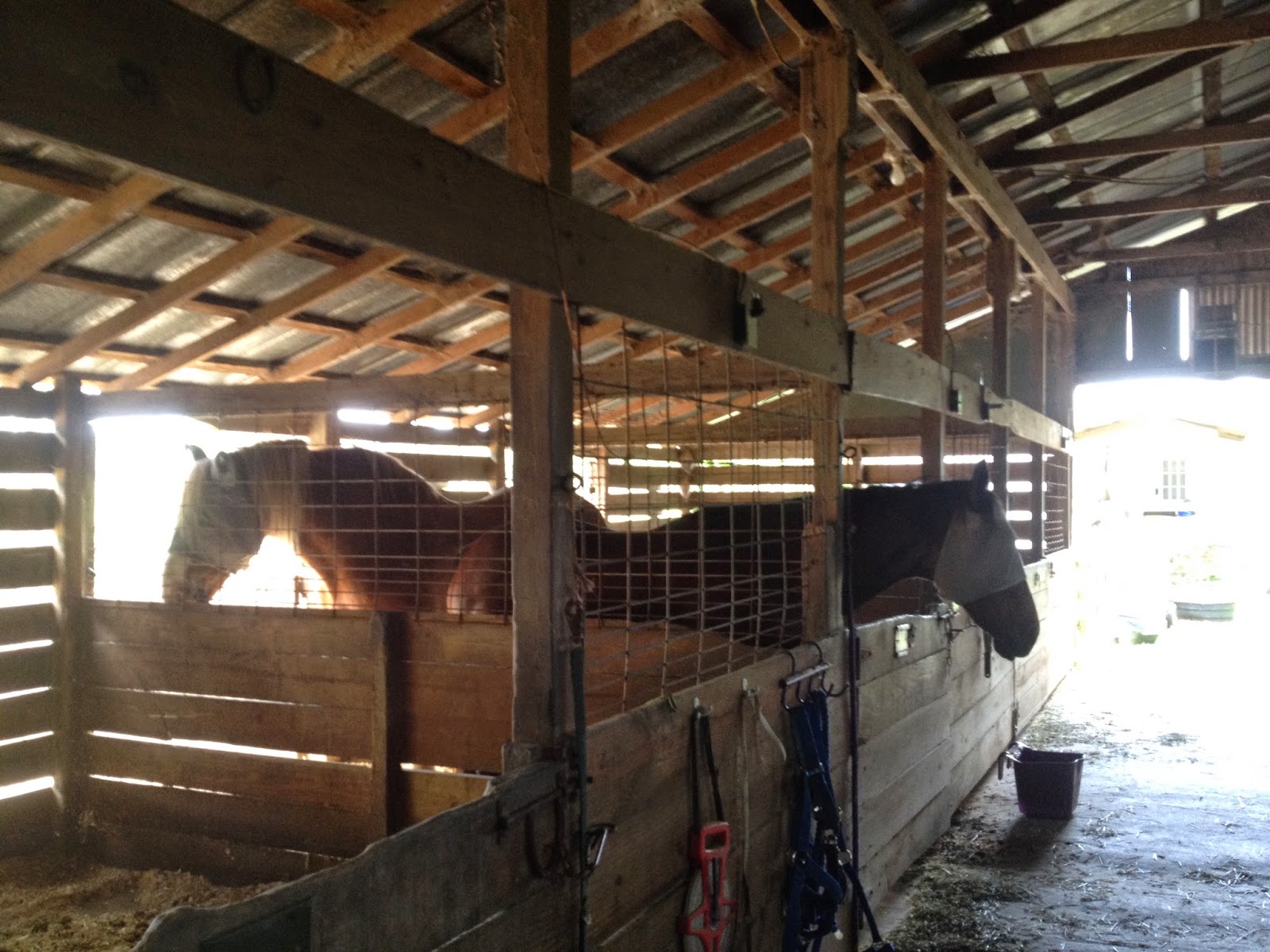 Wes and Jet in the same stall, told you. 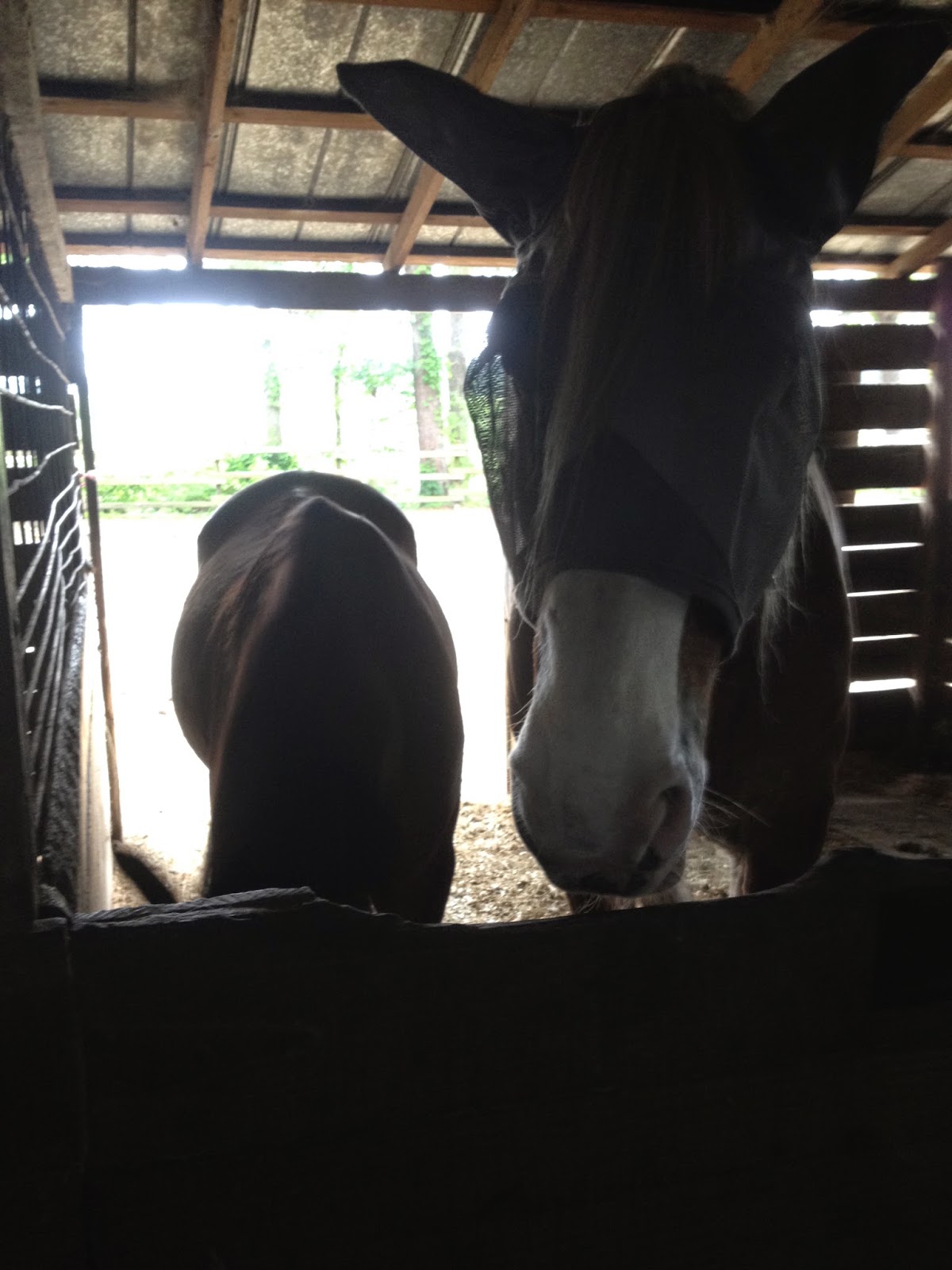 Wes and Jet in the same stall on another day...again. 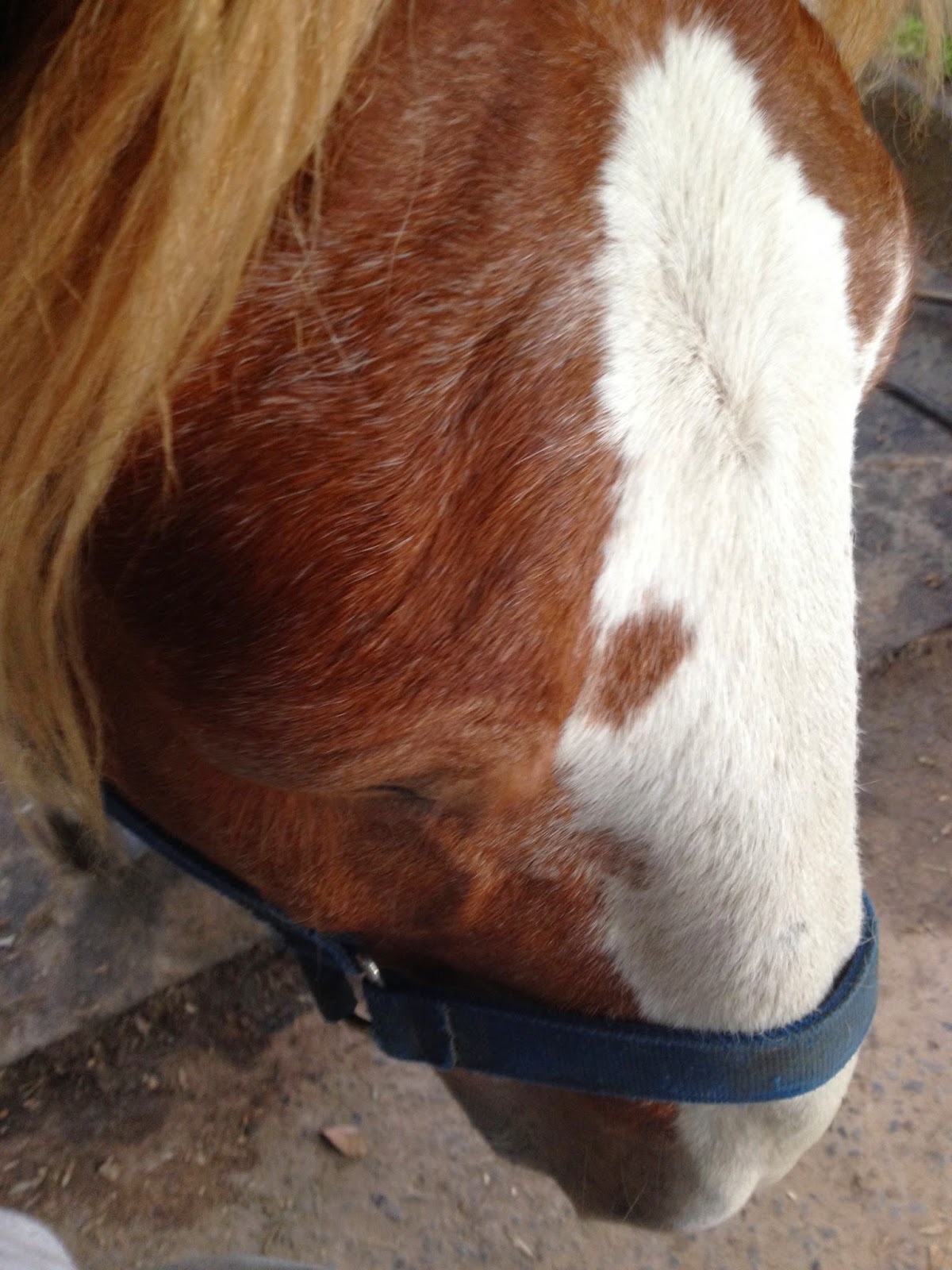 Wes being adorable.  He is TOO MUCH ADORABLE.  He loves when I pet his ears.  He lowers his head for me.  He would let me hang on him for hours, he is the sweetest horse I have ever known.  He's the same sweet puppy dog he's always been.  After I love on him he will always yawn and yawn and yawn.  If Wes could fit in my lap, he would. 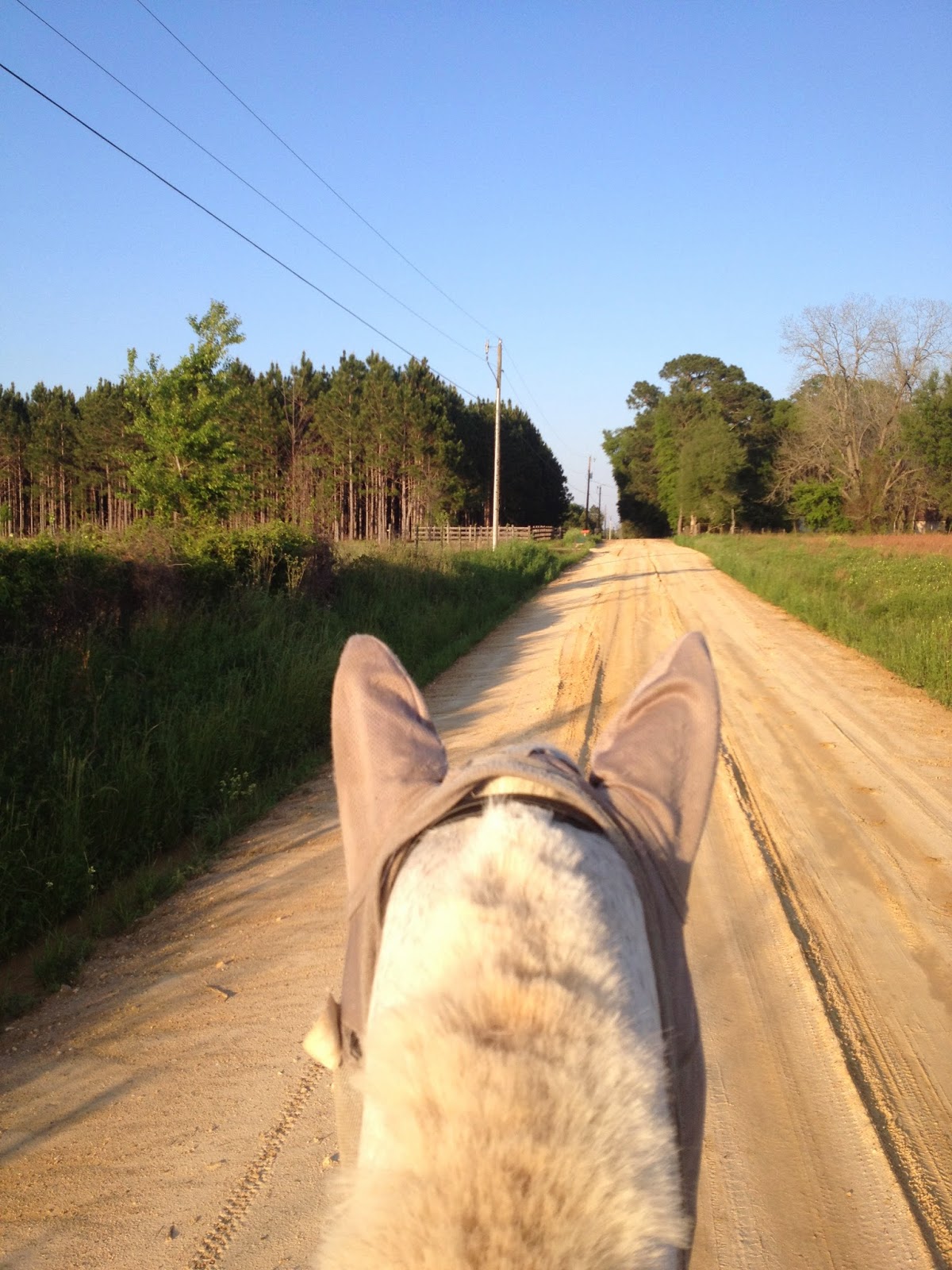 Out for an evening gallop on my Klein baby! 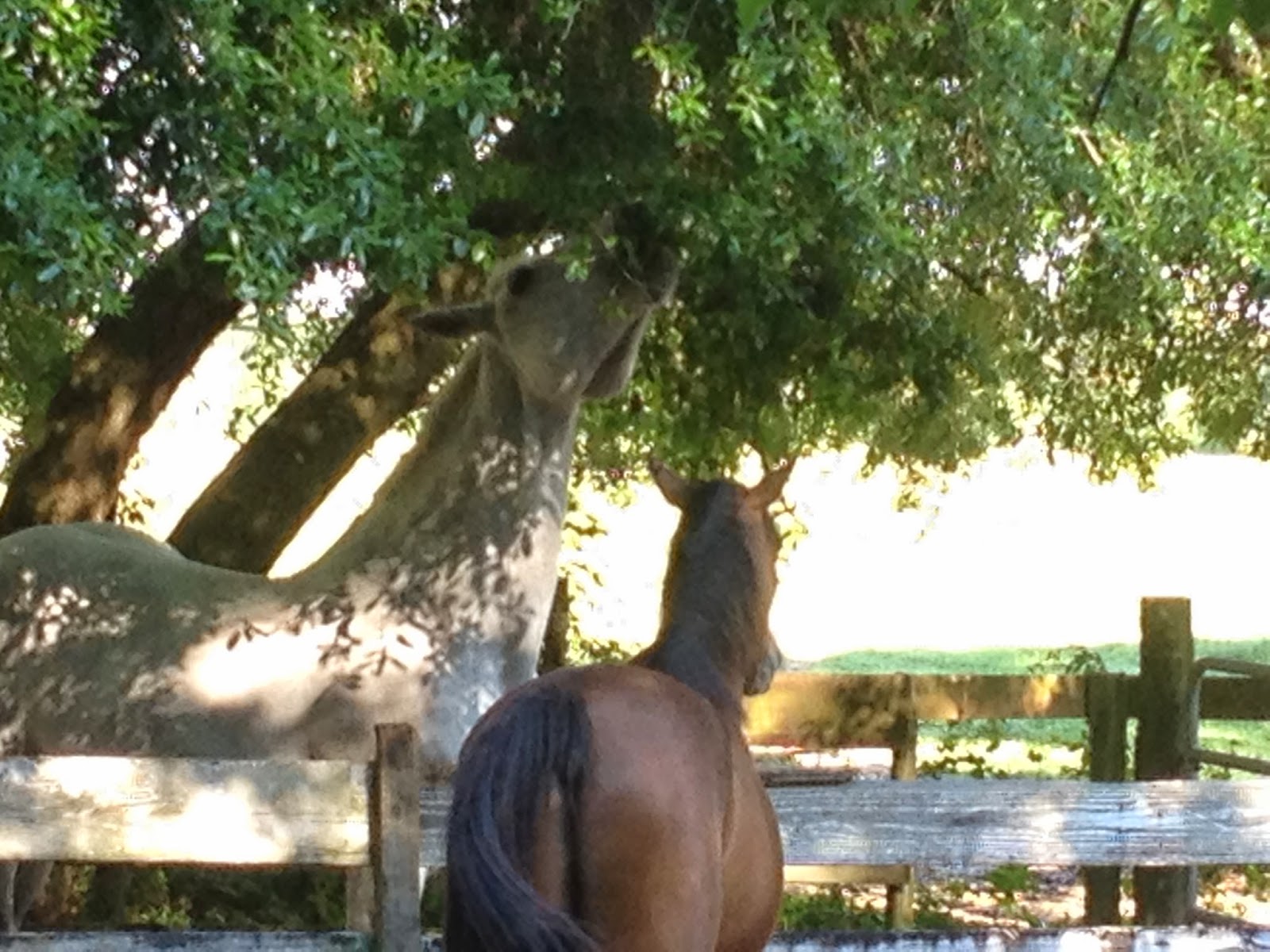 I haven't been doing much with Moch lately.  I just cannot figure her out.  It's disappointing but I just feel she might just like to be a pet more than anything.  It's like rides give her anxiety.  She doesn't enjoy herself and it's not fun for either of us.  It's take a while to accept that this might be reality.

The bestest bf in the world will be home soon too, we all cannot wait for that.  I know the horses miss him.  Ceylon has laid in his spot on the couch since the day he left for Afghanistan.  I cannot wait to post reunion pics and the first pics of him meeting his son, Wes.  Wes got here two months after he deployed.  I want him home more than I want the winning Mega Millions lottery ticket. 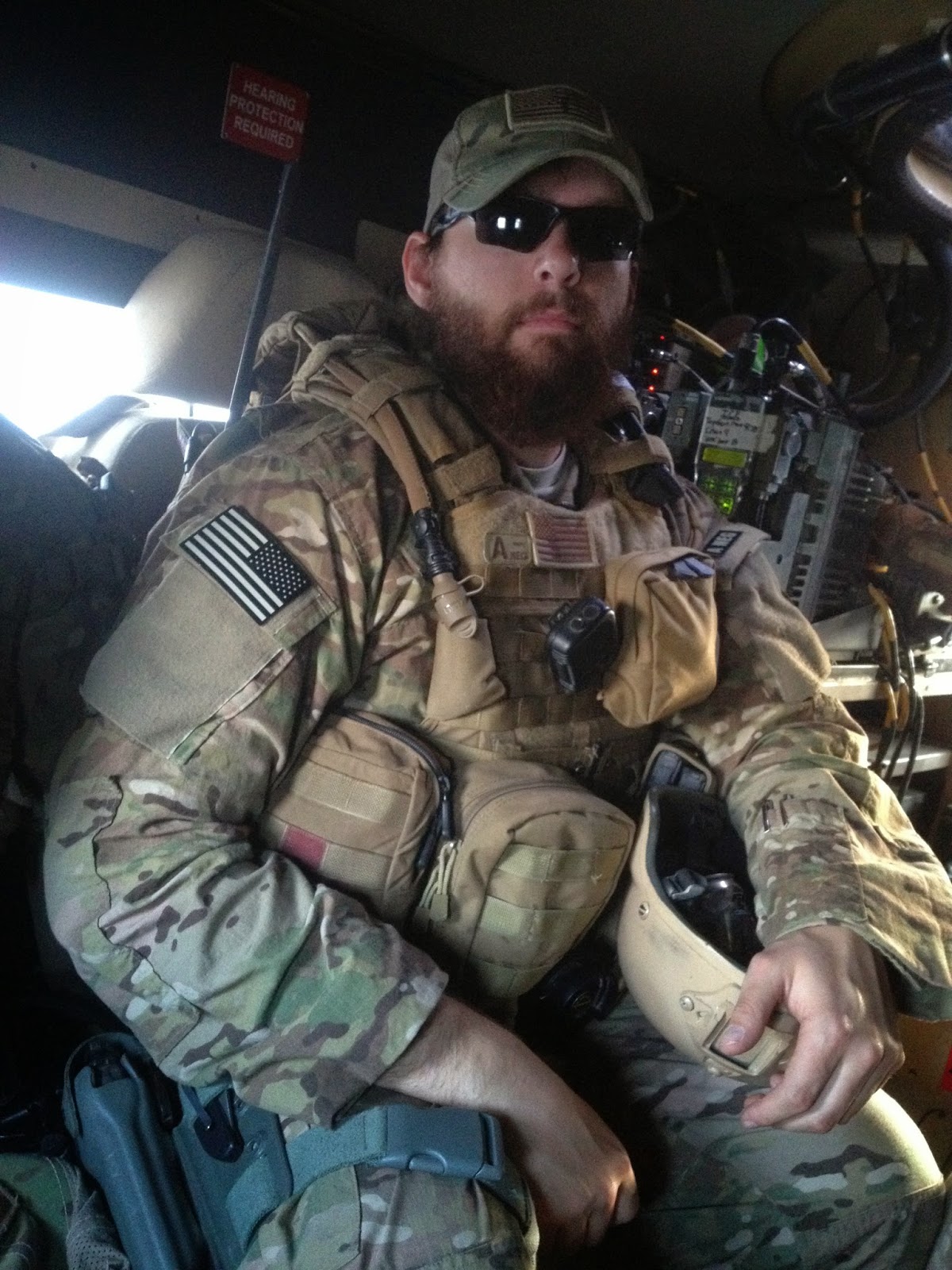 And of course, my rider fitness is going strong just like usual, CrossFit.  I will never ever accept that "Barn Fit" bs theory that is spread around.  If you guys ever want me to write a post explaining why it's a load of bs and just a justification to not go near a gym, go for a run on a regular basis, etc...  I will. 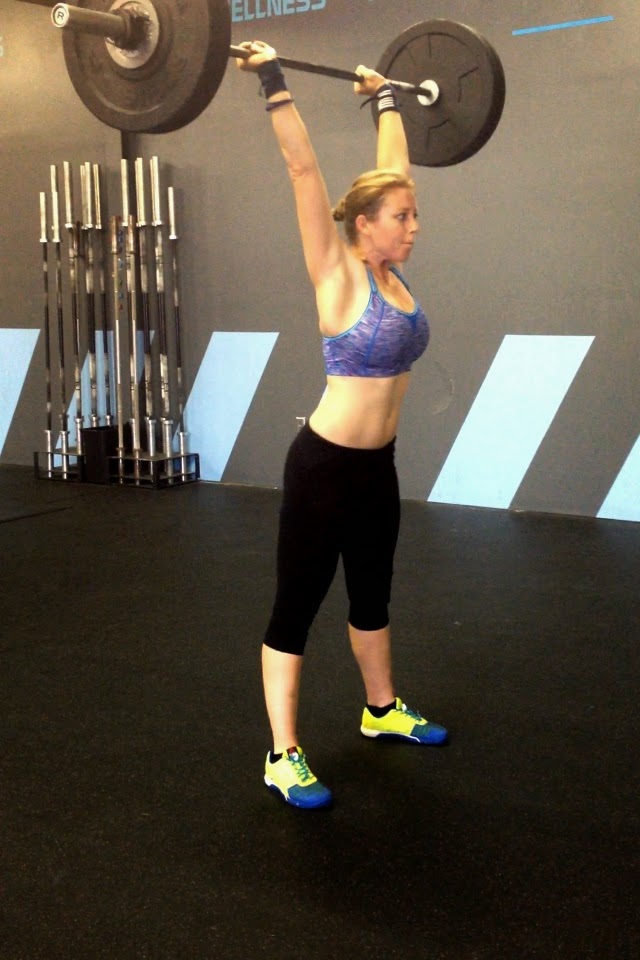 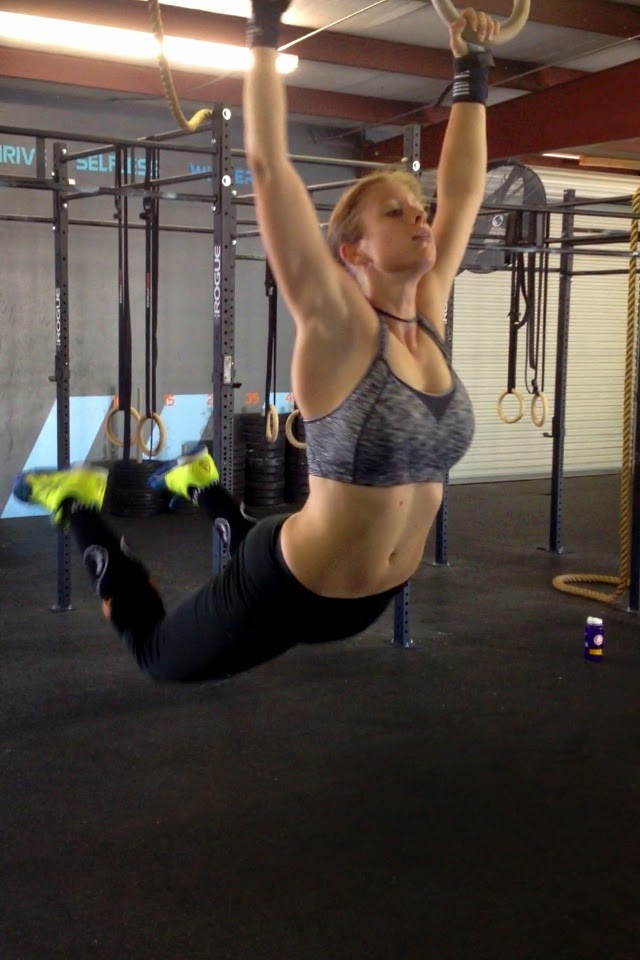 Posted by The Jumping Percheron at 10:33 PM