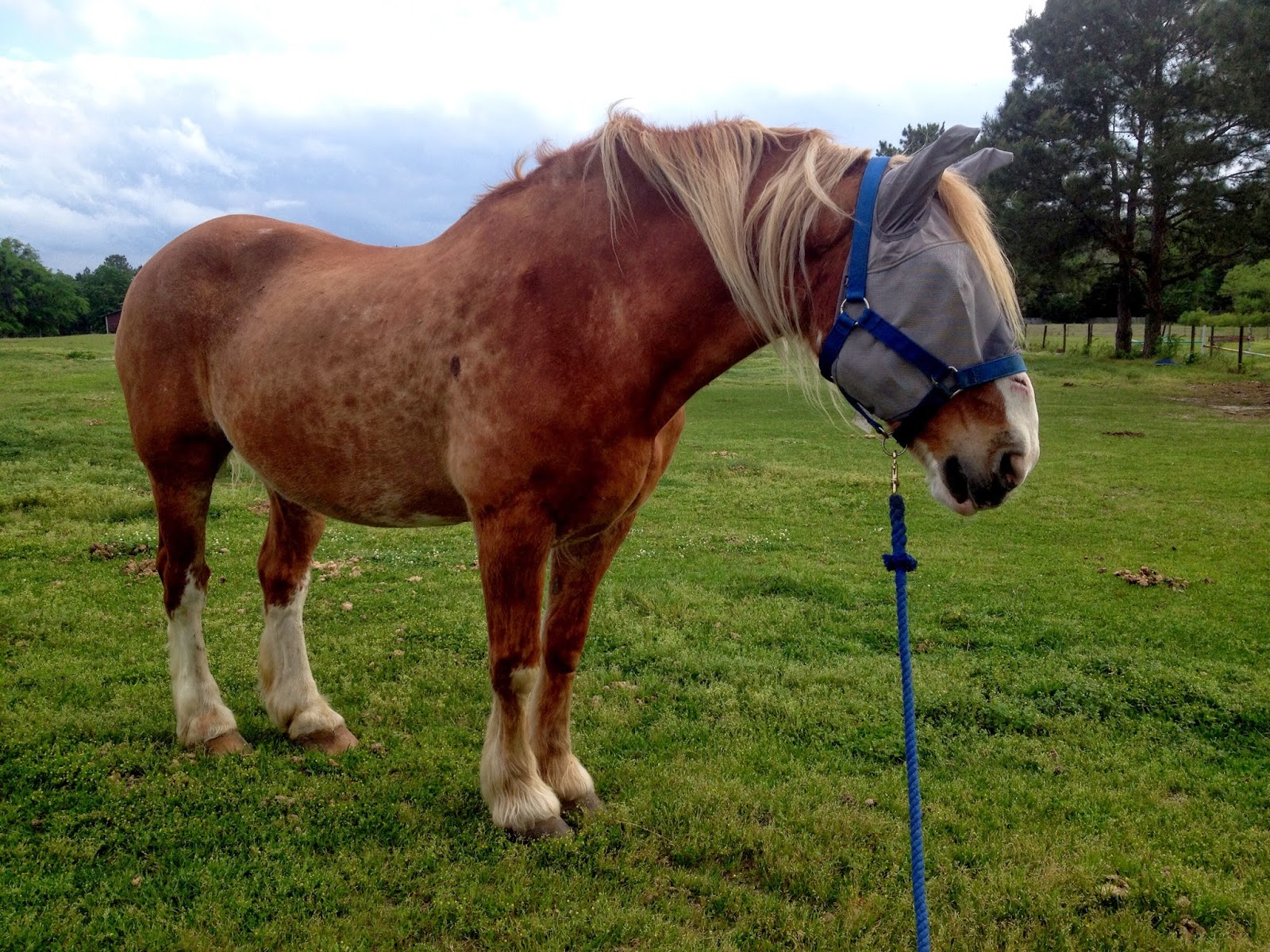 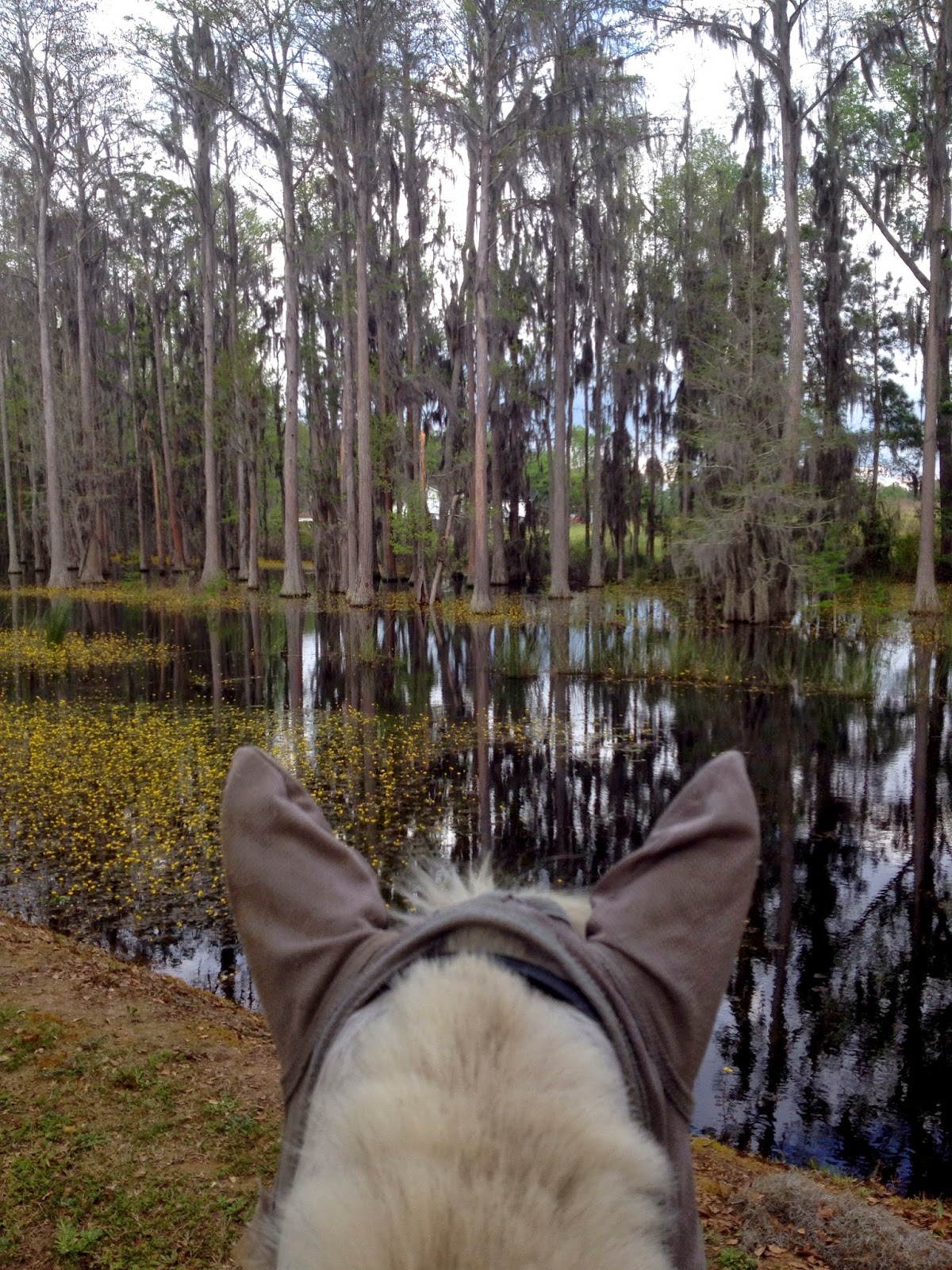 Klein mare and I have been working on some basic dressage stuff lately.  Today was a lot of lateral work.  She gets frustrated easily with lateral stuff, she always has.  But if I just give her a breather when I see the pressure building she's fine.  Her frustration doesn't surface in the form of throwing a fit she just becomes very hurried and anticipates my every cue.  She gets very sensitive and is ready to jump at any amount of pressure.  She has always been like that, it's one of her quirks.

Wes and I have been out a couple more times and we've been having a great time! 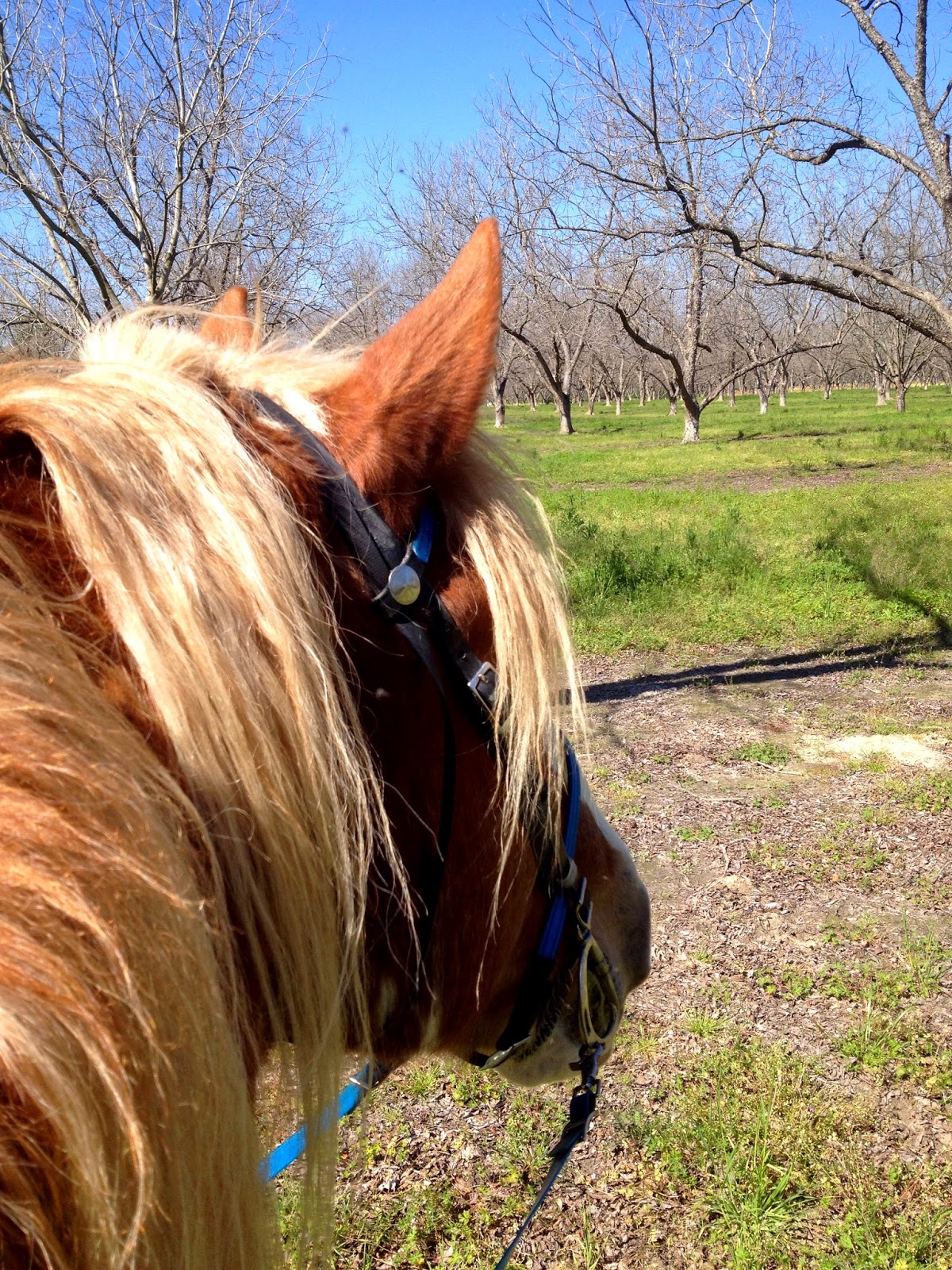 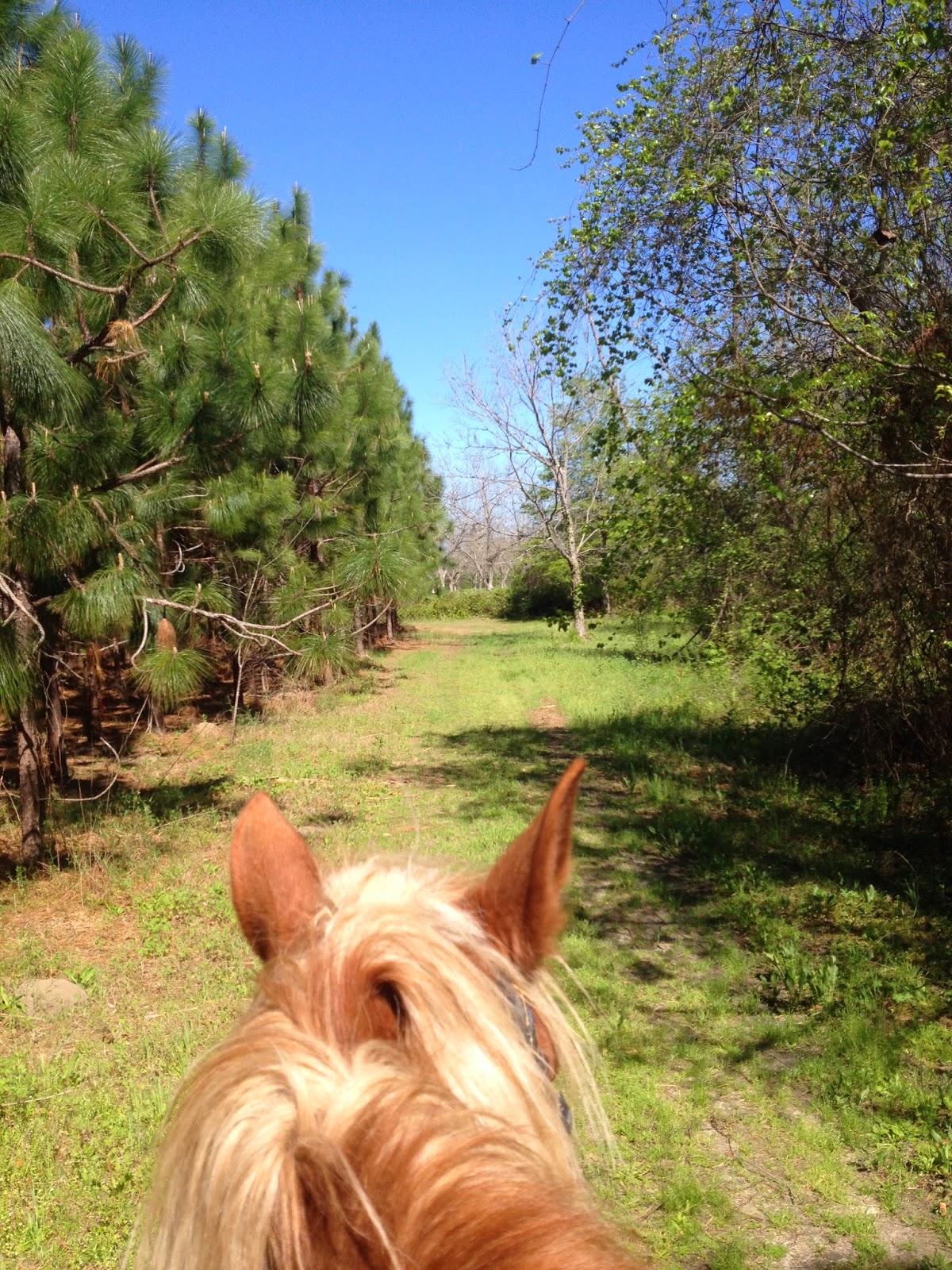 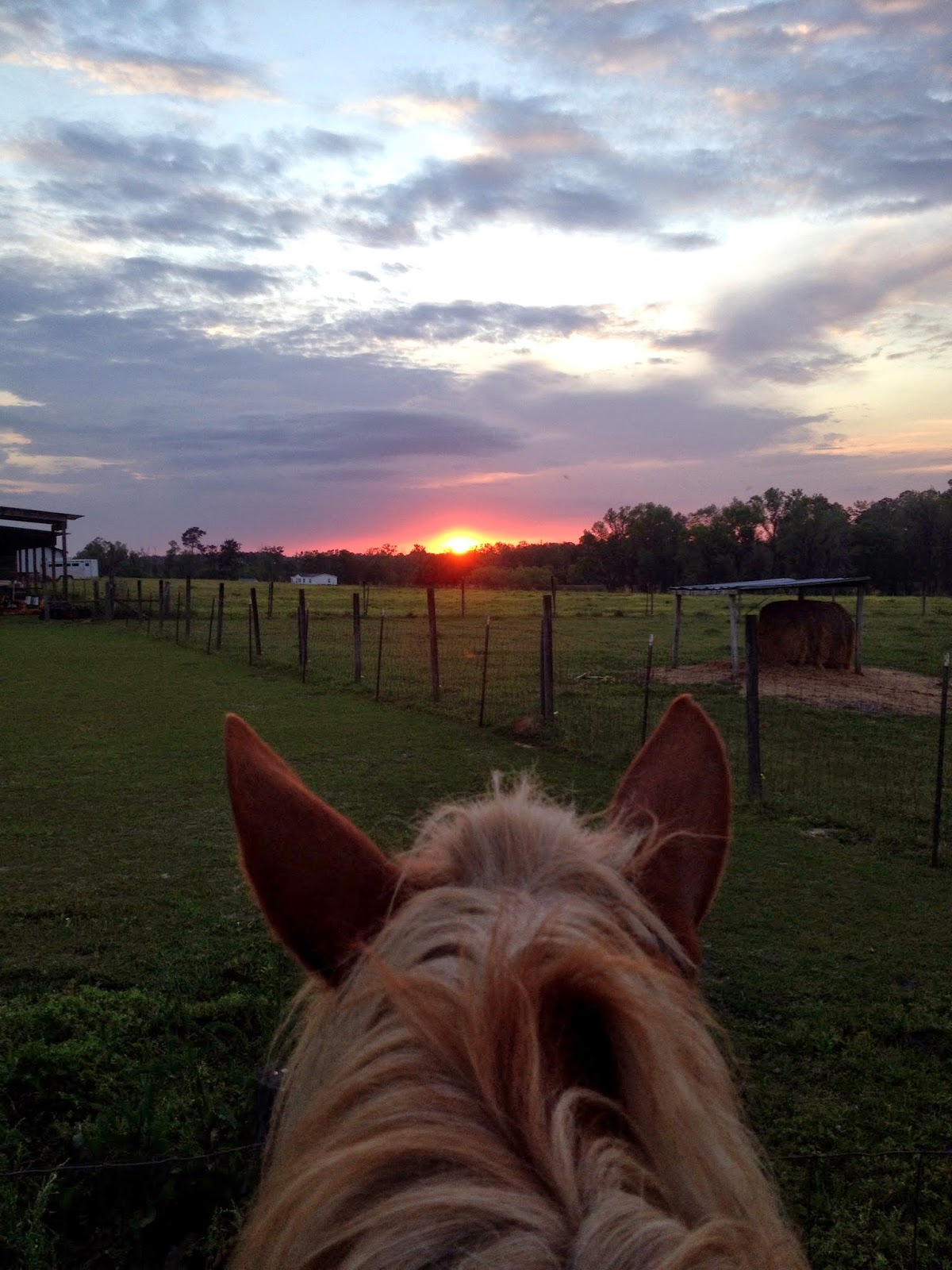 Sunset ride with our boy.  Yeah......about that bridle path, or lack there of.  I'll take care of that this week! 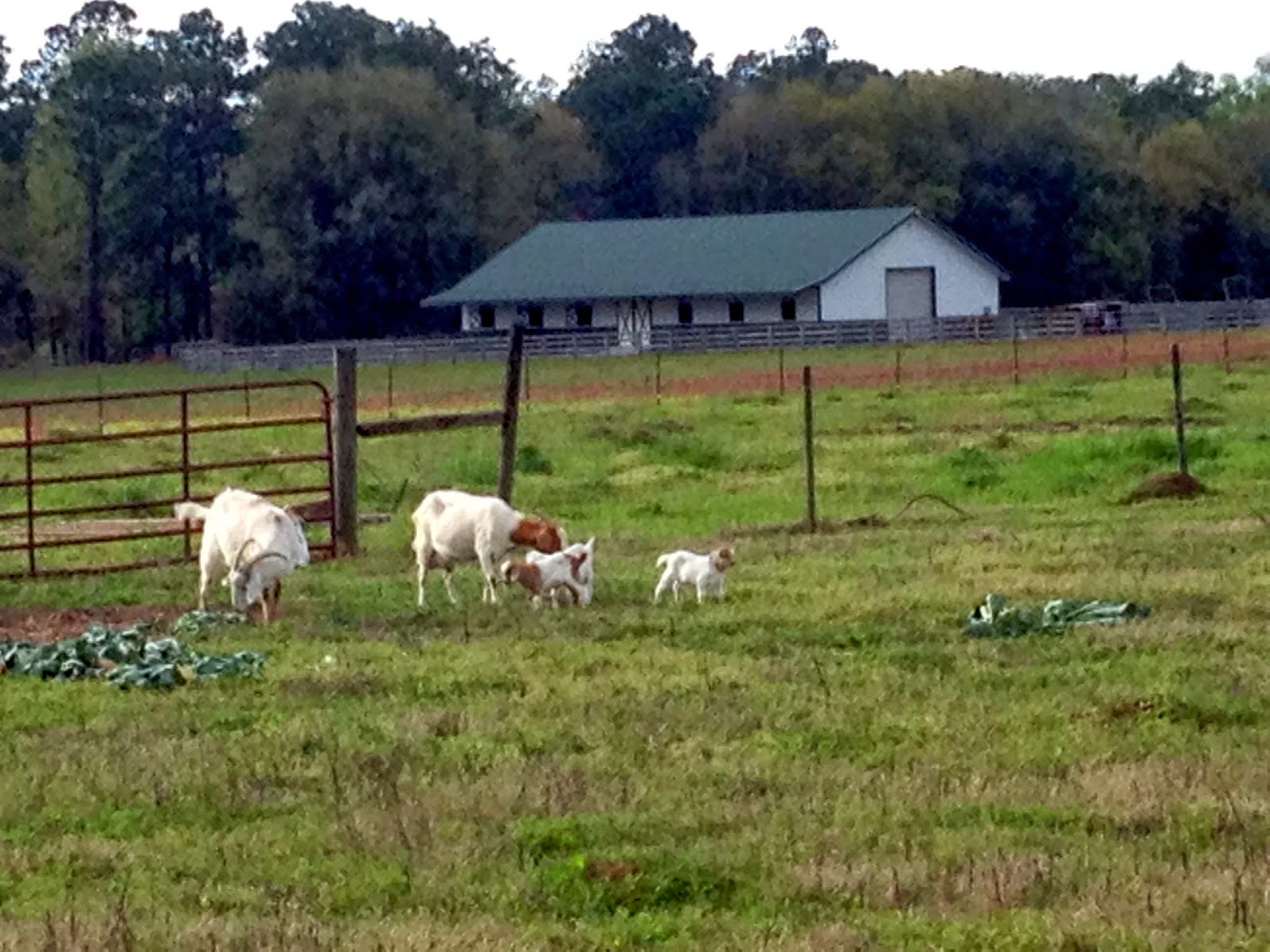 These kids were born last week.  They are SO cute!!!  I was so close to trespassing... 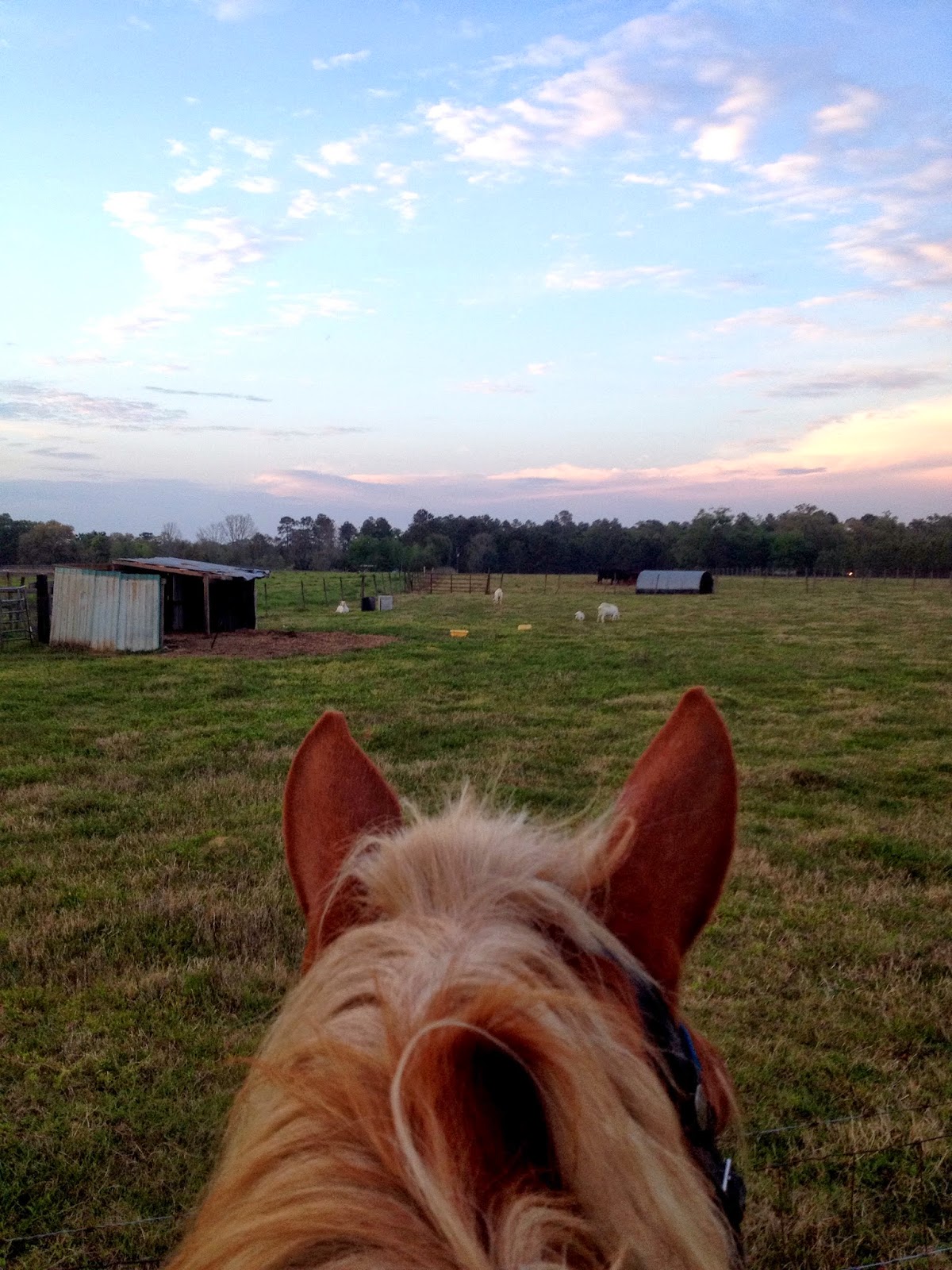 Wes checking out the kids.

This week Wes came in with a nasty gash on his face.  I was pretty disappointed.  But, we all know horses and that means we all know that you could wrap a horse in bubble wrap and put them in a rubber padded stall and they would STILL find something to cut themselves on.  I really have no idea how it happened.  My best guess is that the boys were playing and he might have accidentally got a hoof to the face.  I never see him scratching on anything or fighting. 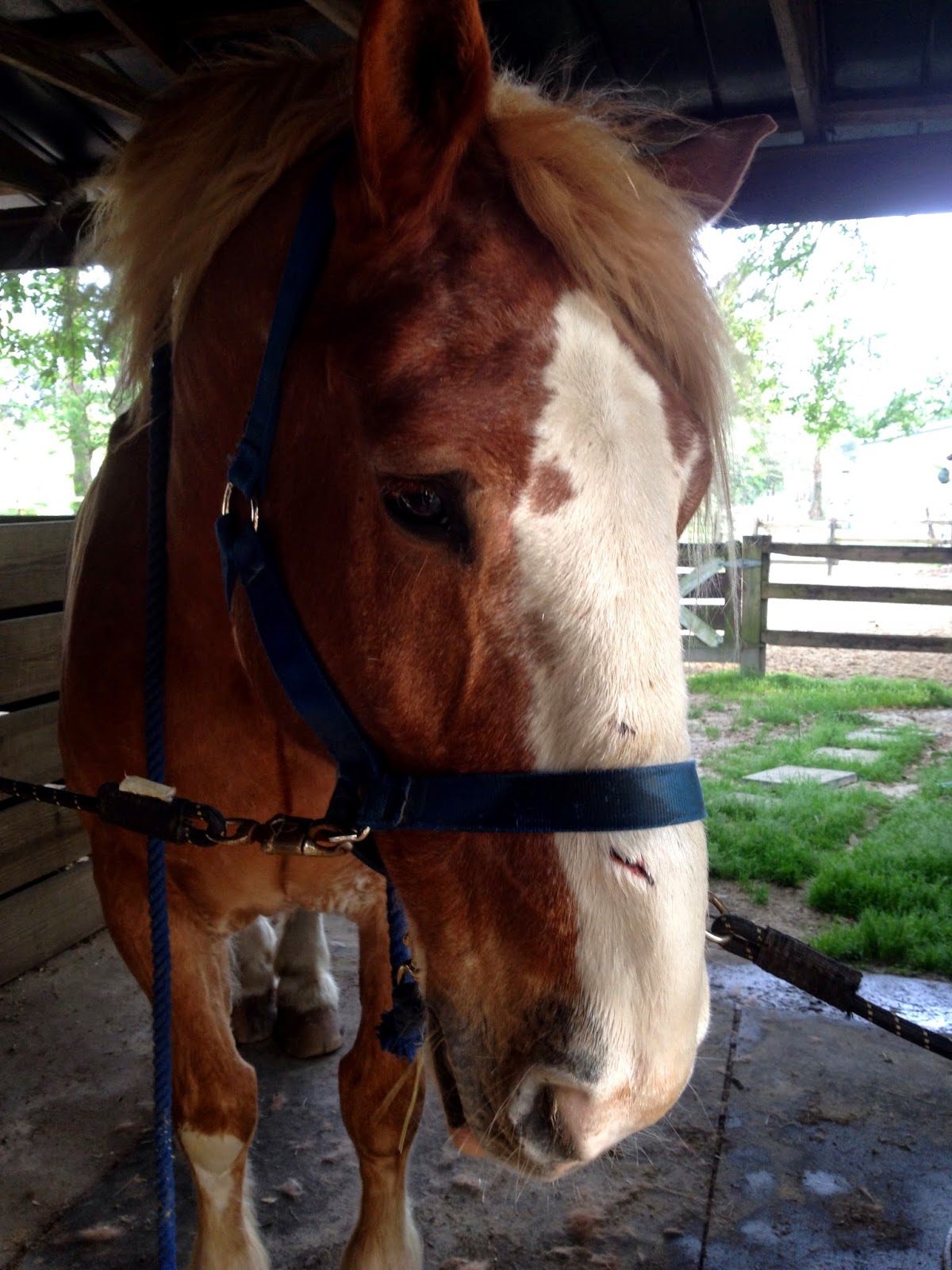 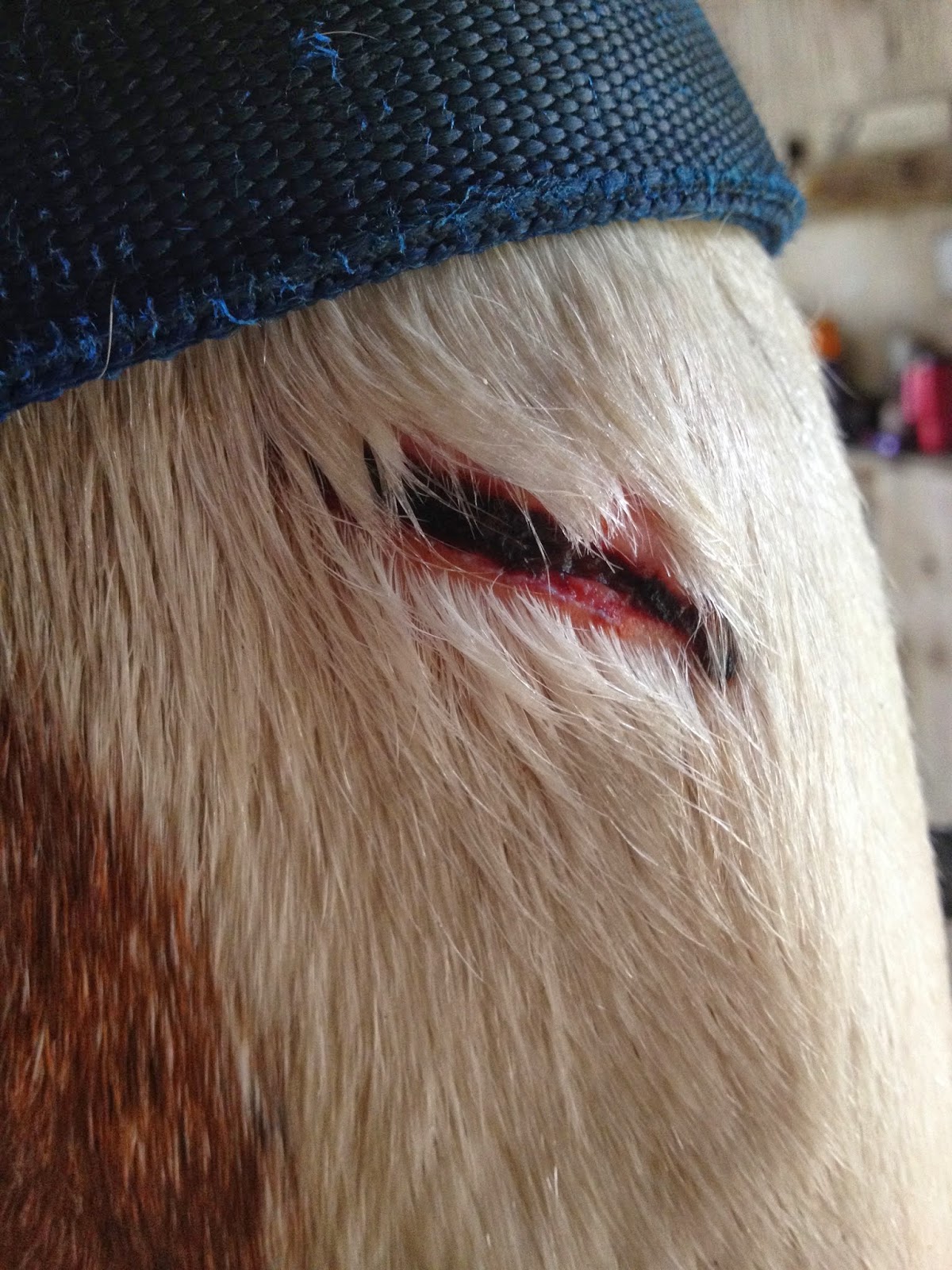 I think that gash hurts me more than it does Wes.  He didn't even flinch while I was cleaning it.  I doubt he even knows it's there.  After I cleaned it really well I sat down on a mounting block for a couple minutes to let it dry.  Wes would lower his head down to me and just hang out. 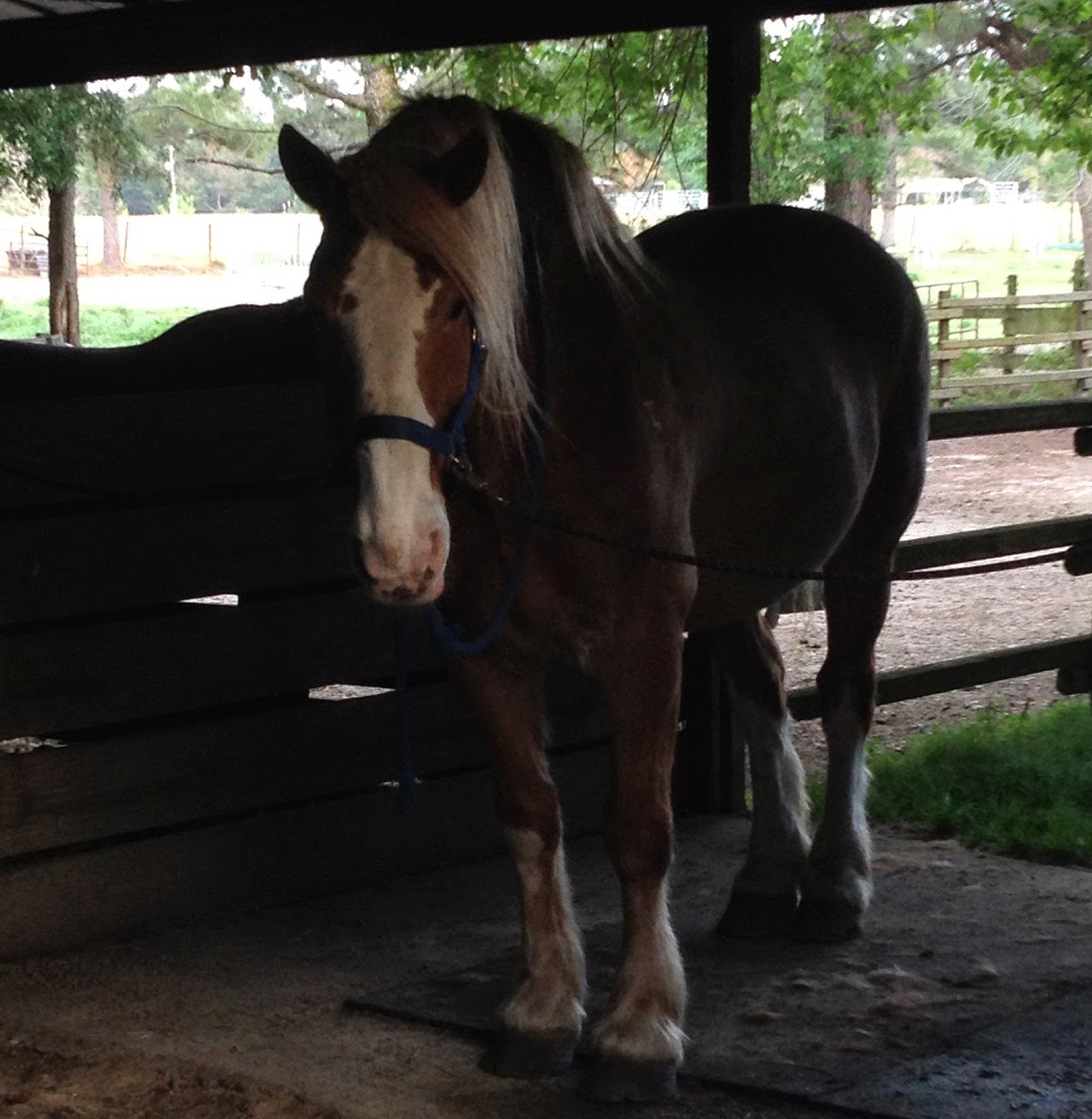 I hugged on Wes for a while yesterday and put my forehead to his and told him again how happy I am he is home.  Sometimes I still can't believe he is here.  He is such a special horse.  He doesn't move when I put my forehead against his.  My eyes teared up yesterday when I was telling him how happy I am to have him home and that I know where he will be for the rest of his life.  I swear he knows.  He acts so close with me.  He remembers.

This evening was just a beautiful, breezy evening.  I put Wes back out and watched him go trotting up through the green pasture to his friends.  His mane was blowing in the wind and he has some dapples coming through on his coat. I have imagined that scene a lot in my head and for it to finally happen in front of me is pretty much a dream come true.  I just want him to be happy, healthy, and out on green grass being a horse. 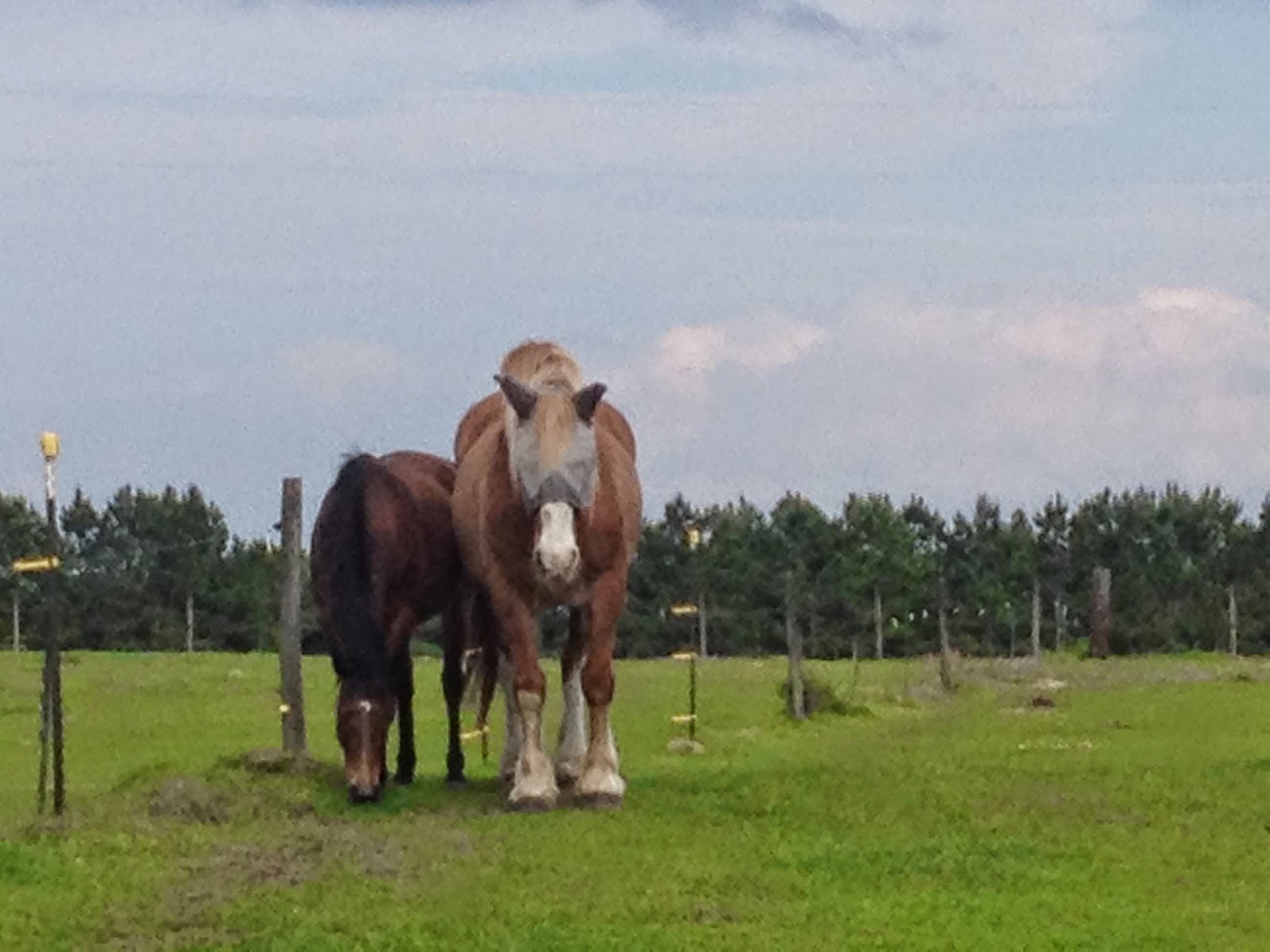 Wes and his buddy Jet.  They crack me up.  I have no idea why they had to be THAT close to each other.

Want to see something awesome? 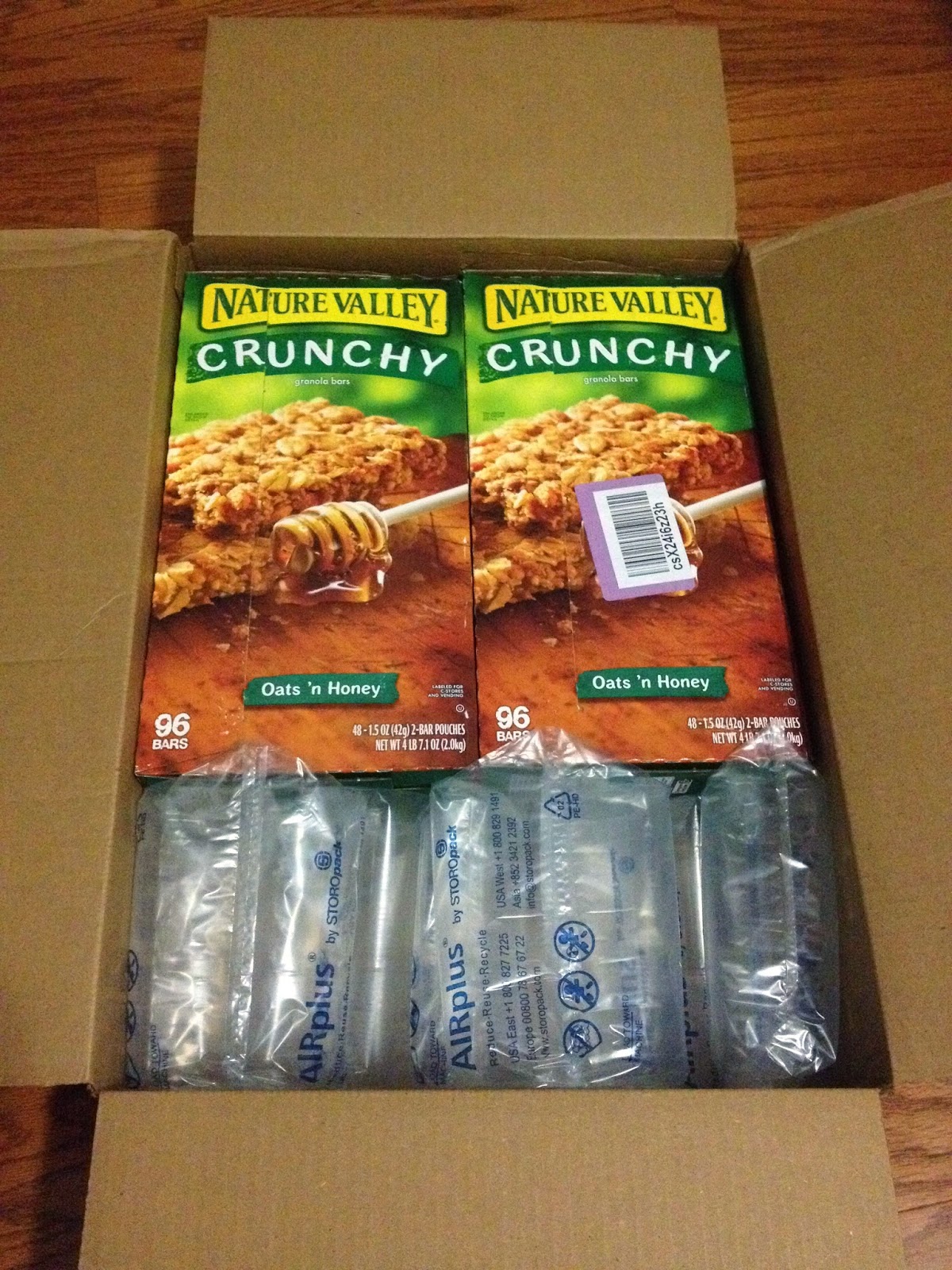 That's right people, that's two boxes of 96 granola bars in EACH box for the ponies!!


Want to know something even more awesome?  My bf is the one that ordered these for the ponies.  He is still in Afghanistan and despite being deployed halfway around the world he is still thinking about the ponies and helping take care of them.  He is the best horse dad!
Posted by The Jumping Percheron at 10:49 PM