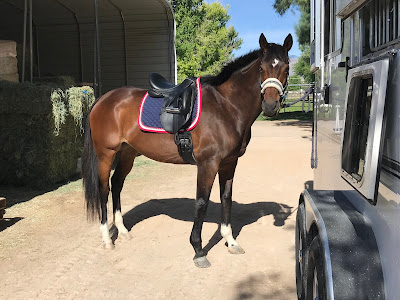 Being a model citizen at the trailer.  I don't think I can resist the urge to go put this girl in some USDF DSHB shows this fall, she is too pretty and I just KNOW she would just absolutely own it.

Last weekend I took B to another local dressage schooling show.  She was MUCH more settled this time.  This time I also wanted to try an experiment.  I wanted to try a less is more approach with her warm up due to the way she warms up at home.  She has gotten to the point where every single ride her first canters are prompt, smooth, and obedient.  If she gets wound up over something it usually happens later on.  These times continue to happen less and less though.

I decided that I wasn't going to canter her until the test.  For her warm up I just walked, trotted, did some transitions, a couple halts, and some free walk, then walked around on a loose rein.  She already started off on her very best behavior.  She stood like a statue while I tacked her up and I got right on her from the fender of my trailer.  The past couple months she has been slightly unsettled to get on when she's at the trailer, she is back to her normal self.  She walked around on a loose rein first like she lived there.  After a few minutes of walking on a loose rein we did my simple, slow, warm up plan.  It worked.  We went in and got a 73% on our first test.  That's the highest score she has gotten, it's also the highest score I have ever received on any test. 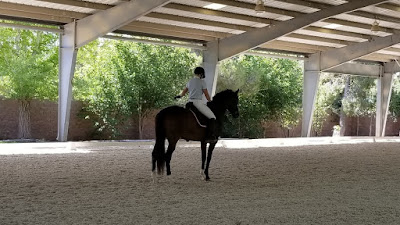 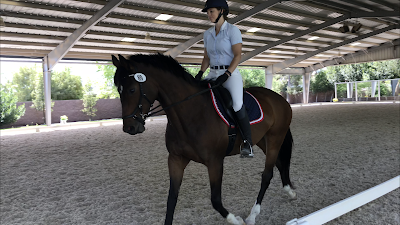 She felt so good, I definitely trotted right on in there with a smile on my face, just happy to be there with her and happy to feel/see how comfortable she was. 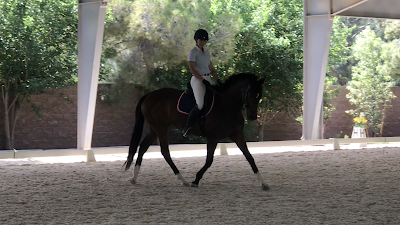 Here she was waiting to go in...wound up, right? 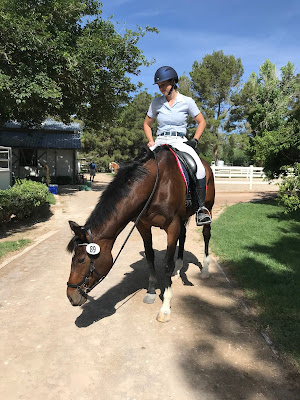 The next test started off ok, but unfortunately a barnmate of hers had just went before her and after the test his rider stood at the end of the ring on him.  B wanted to hurry down the long side every time we turned toward him.  She's not barn sour, and she doesn't call for other horses, so I'm not sure what that was about but she was definitely distracted by him being right there.  And, we all know that's just the way it goes, a bunch of things happen at shows that you have absolutely no control over and that is why we were there.  She needs to get all the experience she can to include situations like that where she just has to continue working and ignore the distraction.

The judge even mentioned at the end of the test that it was unfortunate that he was standing there because it made a clear impact in that test.  But, even with the distraction causing her to hurry, break to the trot at one point where she picked up the incorrect lead when I corrected her, she still scored a 65% on that test.  So if she can get a 65% like that, I'll shut up, and I can't wait to see what the score will be when we don't have that going on. 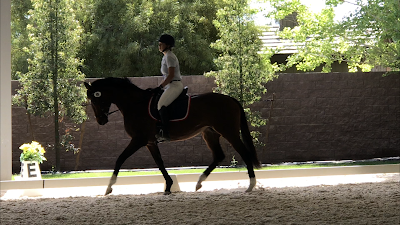 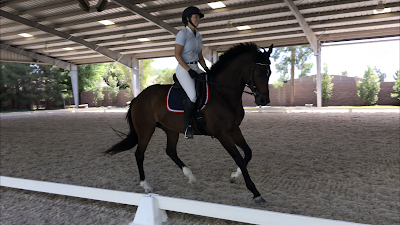 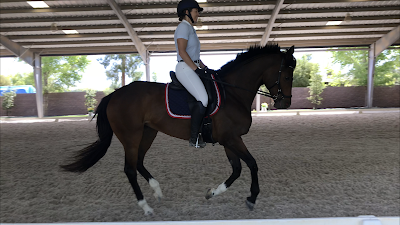 Definitely need to work on the engagement here but this is also where she was getting a little strung out so, she CAN do better than this.

A rated show was added to the schedule for the local area next month.  I'm still sticking to my plan of waiting until the rated fall shows for Klein to get her Second Level scores, so I will put B in the rated show next month.  It will be her first rated show and she'll just do Training Level for more show miles.  I have a lesson later this week on B too, this will the first time I've ridden her in a lesson, she is more than ready.
Posted by The Jumping Percheron at 12:41 AM