Recently this area had a small outbreak of EHV-1, which is extremely uncommon.  In the northeast it seemed like every single spring there was an outbreak up there somewhere of EHV-1 and Strangles.  So we're used to having to stay home for a few weeks and wait for the all clear.  This outbreak out here spread to Arizona, Idaho, Utah, and California.  Some of the horses were neurological, some weren't, some made it, some were euthanized.

The Nevada issue originated at the Nevada State High School Rodeo and the horses were quarantined at their homes about an hour west of here.  There was a travel ban for a while and multiple shows were cancelled, mostly western events with a warning for people to specifically stay away from barrel racing events.  Though, it doesn't matter, who knows what other horses that would be attending other shows in other disciplines came in contact with any of those horses.  Not a risk I want to take.

There was a case in northern Nevada two weeks ago that wasn't reported when the positive test results returned (really hope they get fined for that at a minimum).  So it has kind of come in waves and it has made me hesitant to enter the rated show that I had planned for Klein that is this coming weekend.  I decided not to take the risk of entering and spending a few hundred dollars only to have it cancelled, since there is a 99% chance of no refund.  If it was a few more weeks out I would have been fine, but this show is just too close to the what appears to be, and hopefully is, the end of the outbreak.

Since there are plenty of rated USDF shows here this fall I'm going to just wait for those.  Those scores will all be on the 2020 competition year too.  I would be rushed to get all the scores we need for Second Level this year after not going to the show this weekend.  So it looks like the fall is where we will put our concentration.

There are still some local jumper shows in the area I'm looking at just for funsies with both of the girls.  Super B is still going to the next dressage schooling show in the middle of May, and there is a jumping clinic I want to take her to, also in May, with The German Riding Instructor, Ronny Riemer.  Then, at the end of May there is a freestyle clinic I am going to take Klein to.  So, we will have plenty of things to work on.

*EDIT*  I wrote this last night, guess what just happened this evening?  Another new case reported in Las Vegas.  That is exactly why I rearranged my show schedule.  This is exactly what I was nervous about.  If you aren't sure where to look for current outbreak information for all types of equine diseases, the Equine Center for Disease Control has a map where you can click on your state.

Lucky for me, our barn just got a TON of new jumps so in addition to being able to build full courses and multiple gymnastic lines, the girls have plenty that I can put on the ground in the way of ground rails and cavaletti too.  So, we'll just make things extra interesting until the coast is clear for real. 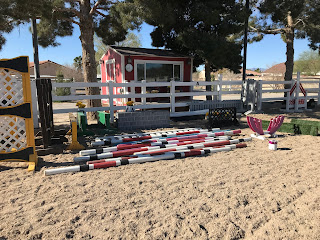 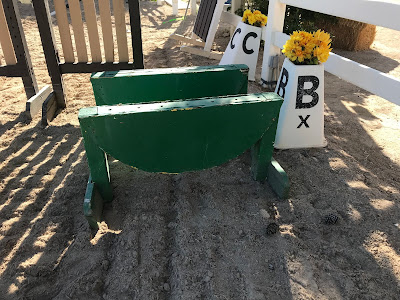 All kinds of fun things! 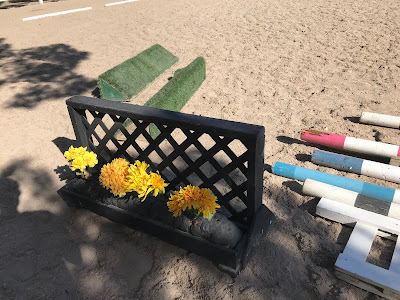 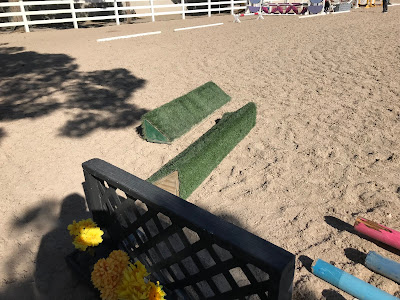 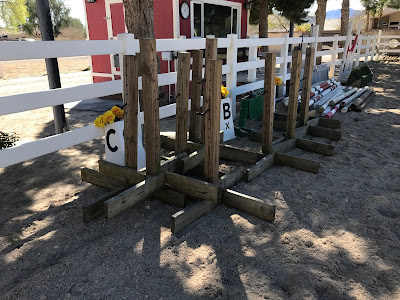 The Other Half also put the legs back on all my jumps so we could get them back in the ring.  Yes I did make the movers pack them up and bring them with us. 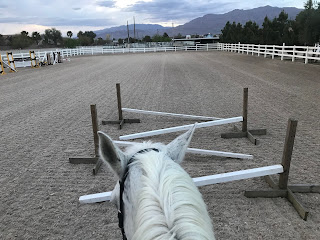 A fun exercise that both the girls worked over last week.

And one Klein did recently.

Posted by The Jumping Percheron at 12:58 AM