Back to Work for the Super Mares 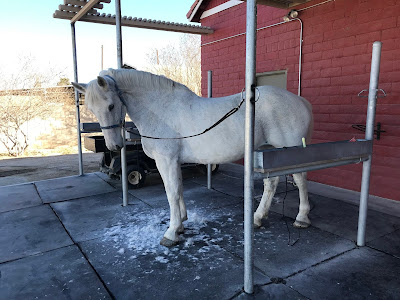 Klein got a haircut immediately.

Though I was only away from them for 2.5 weeks it felt like much longer.  I enjoy spending time with them and riding them so much it is pretty much physically painful when I can't do that for whatever reason.  The withdrawals are real.

I am still very, very happy though that I brought them out 2.5 weeks early.  That gave them time to settle in to their new surroundings and for Super B, let her feet start drying out.  The monster abscess from hell was pretty much healed completely by the time I brought her out to Vegas, but anything lingering is long gone by now in this wonderful dry climate!  I was SO worried that in the NJ rainforest something would get back in the wound and re-infect it during that period of time where you have to stop wrapping or it will never dry out phase.  I was meticulous with keeping it clean but that is an odd spot to be, where you need to keep it clean but you cannot keep putting moisture on/in it. 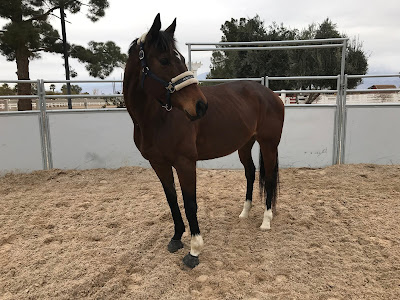 She is looking absolutely amazing here in the short three weeks she has been here.  Just wait until I put some muscle on her too.

Once again the universe has shown me how much Super B was meant to be in my world.  I have had Klein for 12 years now, and while she does love her Wes and Mochs, she never got upset when I would take them anywhere, or take her anywhere away from them.  I have heard her call for them only a few times over the years.  Klein and Mochs went on a long haul together too with the last move and their relationship stayed the same.

Klein and Super B have taken some kind of vow with each other.  Super B is also pretty independent.  The majority of the times I have taken her anywhere have been alone.  She has been excellent everywhere we have went.  However, after this trip, Klein and B are now BFFs.  They have both thrown fits when I separate them.  They don't do anything stupid, they just call for each other and run around a little bit.

Knowing them both to be very independent, I knew this would stop pretty fast and less than a week of them being back to work, it has.  Since they were in a new place I started by taking them together to the cross ties to be groomed/bathed.  There is a turn out and round pen next to the ring so I would also have one of them in the turn out or round pen while I rode the other one in the ring.  That way they could have a clear view of where the other was and what they were doing.  It allowed them to figure out the routine at the new place, which was the same before.  We go work, then they go back to their stalls/turnout.  No big deal, nothing new. 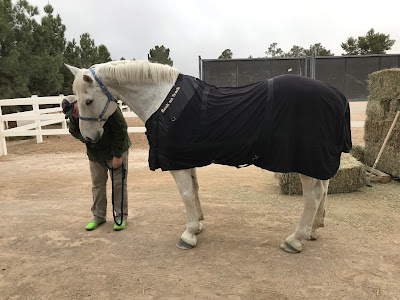 Klein humoring The Other Half with affection. 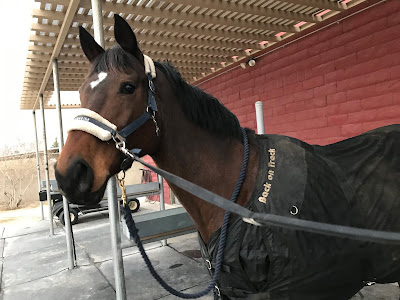 After a couple days of that I started by taking them one at a time.  Whoever was going in the turnout by the ring would go first, then whoever was working I would go back and get and take to the cross ties to groom and tack up.  When we were done they would go back to their stalls/turnout individually.  They are both very smart and figured it out quickly.  We're 6 days back into our routine and I just grab whoever is working first and the other one goes about their normal day until it is their turn.  There is no more hanging out in the turn out by the ring or being in the cross ties together. 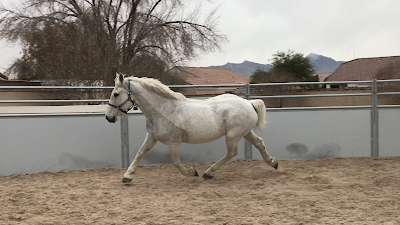 Letting them stretch out in the round pen. 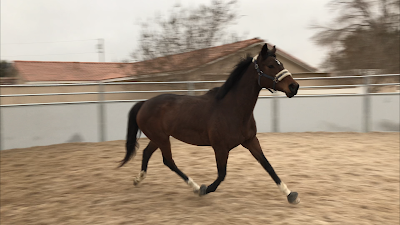 Klein is an out of sight out of mind kind of horse and she stood in the cross ties by herself fine.  Same with work.  She doesn't care once it's time to go do something.  Super B though was having trouble standing still in the cross ties and would call for Klein and paw.  Today after our ride she stood silently and enjoyed a warm bath.  No pawing, no calling, everything is back to normal.  I love having smart horses. 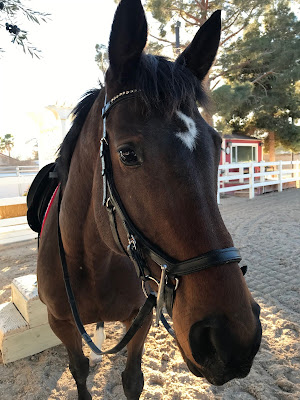 #supermodel
Posted by The Jumping Percheron at 8:00 AM