It's That Time Again...to Move Across the Country, Part 2 - Mochs and Wes 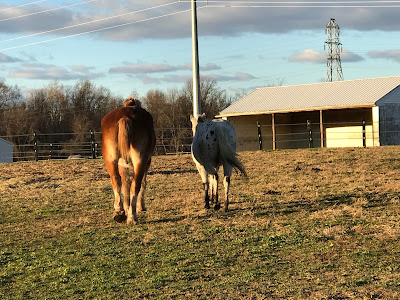 I have received a lot of questions through IG and the blog's Facebook Page about where Mochs and Wes are since the posts about the road trip with Klein and Super B.

I have decided that they will stay in New Jersey for a few reasons.  Wes was noticeably stressed on the trip from Georgia to New Jersey, and that was WITH Brook Ledge.  You can't get any better than Brook Ledge.  The trip to Las Vegas is over three times longer, and Wes is three years older now.  He will be 28 this coming year.  While he has no health problems and is doing wonderfully, that trip would be hard on him.  Also, he is so clearly a polar bear.  In South Georgia we had started to wonder if we were seeing the beginning of the end with him when he started to drop some weight despite being all checked out by a vet, teeth, fecal, chiro, having a round bale 24/7, grain, etc...

When he came up to New Jersey it is like the clock got turned back on him a few years.  It was the heat combined with the humidity.  Those two things combined are so hard on the big horses.  Especially one that is not only from Canada, but has always lived somewhere that there is a winter.  Every time the weather turns cold up here it's like his battery gets fully recharged.  He perks up and even runs around with the mares often.  He LOVES the cold.

While I don't think the dry heat is a problem, I do think the move combined with one extreme to the other would be and I don't want that for him as hard as it is to say.  I have always wanted nothing less than a big, green pasture for him in retirement where he could just go out and be a horse.  He more than deserves that.  One of the saddest things I have ever seen was when he came home and had forgot how to graze due to being off pasture for so long.  It took him a month and a half of staring at the grass to figure out what to do again.

I found a wonderful retirement farm up here that caters to retired horses and that is all that resides there.  I went to meet the owners and take a look around.  It is a beautiful, quiet, family owned farm with its own hay fields, and large pastures.  The owners keep it absolutely spotless and the pastures have big, solid run-ins.  The organization is impressive too when it comes to blankets, first aid kits, fly masks, etc... for each horse.

After much consideration, and tears, I decided that would be the best place for him.  Now on to Mochs...she was at a friend's farm as you know from a previous post taking part in the lesson program and even went to a couple jumper shows and did well.  I decided that the work wasn't consistent enough for her and I would rather have her do nothing at all than have that inconsistency.  Also, Wes loves looking after his mares and I was concerned about taking Wes away from all his mares to a new place.  While Mochs was at the other barn Wes still had Klein and Super B at home to keep him busy.

If Mochs went to Las Vegas, she would not be a priority from work due to the competition plans/goals I have for Klein and Super B and that wouldn't be fair to her.  I decided that the best place for her would be to go with Wes.  I brought her home the night before I moved them and Wes was so happy to have his pony back. 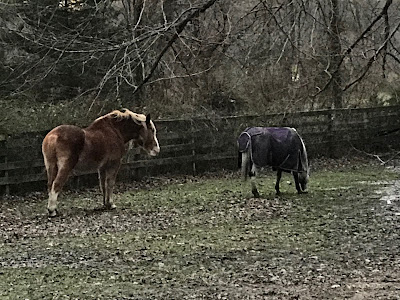 Reunited the day before the move.

The day I moved them Klein and Super B took no notice.  When I unloaded Mochs and Wes at the new place, they took no notice of Klein and Super B not being there.  Mochs has made it clear she doesn't like Super B too, despite Super B being the most non-confrontational thing ever.  They went out into their new pasture like they had lived there forever.  Wes was so sweet he was pulling hay out of the feeder for Mochs.  He is so happy to have his pony back.  They went around and said hi to some new neighbors then went back to eating next to each other.  Seeing them so happy and peaceful out there made me feel 101% sure they are exactly where they should be. 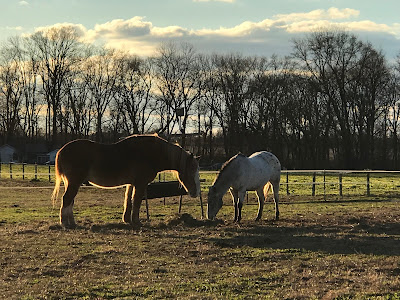 Wes put that hay on the ground for them to share. 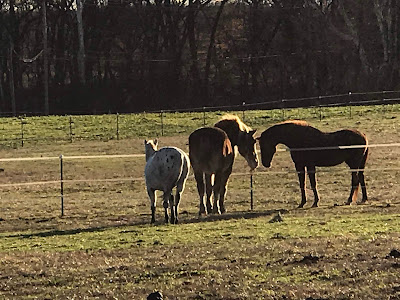 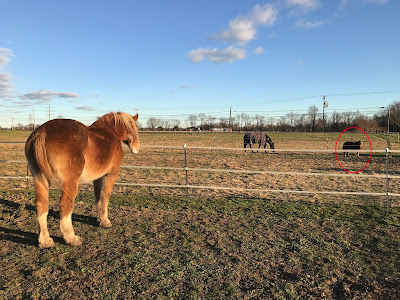 Wes' mini-me, a mini gelding that looks JUST LIKE HIM named Montgomery.

I needed to see that to be confident I did the right thing.  There were tears loading them up and thoughts that maybe I was abandoning them, but after seeing them walk out there like they owned the place, I felt much better.  Also, something very important to note is that they are out TOGETHER. They are not split up, they have a pasture for just the two of them.  I also have a few friends here that are going to say hi to them every once in a while.  The owners are also big on Facebook Live around the farm and they do videos and pictures all the time.  They will be groomed and bathed regularly as well.  They aren't just feral out in a pasture.  Also, if something were to happen there is nothing preventing me from being out here within 24 hours, and a close friend of mine is their Emergency Contact in the local area so she could be there almost instantly if a situation warranted.

So, as hard of a decision as it was, I am confident in it and I know for a fact they are happy.  I will be visiting them a few times in the next couple weeks.  I just want what is best for them, and I found it. 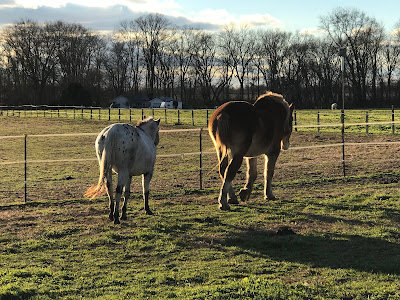 Posted by The Jumping Percheron at 1:30 PM