It's That Time Again...to Move Across the Country, Part 1 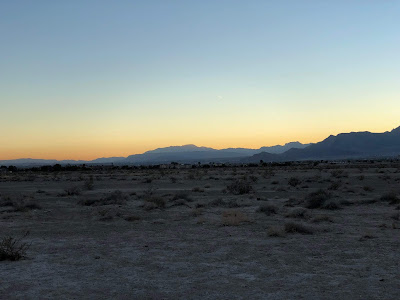 I have always loved the desert, since I was a little kid.  Maybe it is because somewhere between Phoenix and Tucson was where I had my first pony ride when I was 6.  It was a trail ride through the desert and I purposely made my pony run away with me because I wanted to go fast.

It's that time again, to pack up everything and move across the country.  We have been here three years and it is time to go, thankfully.  We knew when we got here that we would be here three years due to my special assignment at this location.  We just did not know where our next move would be to.  You never know until a few months out.

We have known since August that we will be moving to Las Vegas next month.

Before we go any further, I need to preface this post with a couple things.

First, let me remind everyone that no one asked if you would like to move to Las Vegas, or what you think of it.  I have had SO many people make unsolicited comments about how hot it is (Really?  It's hot there?  What makes you think that?), how they wouldn't want to move there (Huh, Well, no one asked you if you wanted to move there).  If you are going to say something like that to me, you don't know me.  I could go in a sauna and not be hot.  There have even been some comments that are so petty they brought up the fact that "It gets cold there, it snowed once."  Yes, because that one time, that one year they got *GASP* flurries.  Yeah, that is such a great comparison to the north east that gets hammered with winter weather for months and has weeks of being below freezing, yes PERFECT comparison!

It's called Active Destructive Communication, if you haven't heard of it, you should Google it and read a little bit.  It will help you out in your daily communications and maybe improve your filter.

Among my co-workers there have also been comments about how busy it will be out there.  That again is the most obvious statement you could possibly make.  Really?  You think a prosecution office would be busy in the party epicenter of the United States of America?  No way!!  Why would you think that?!  If you don't think the office out there is busy, you must be living in a cave.

The Other Half and I, we love the southwest.  We love the desert, and we are VERY excited to be going back.  That's another thing I've had to hear, people telling me about taking my horses to the desert.  You people forget, Klein and I lived in the desert.  Nothing like people who haven't lived there before telling you how it is.  Kind of like when people tell me how much draft horses eat, yet, they have NO draft horses.  Klein will be VERY relieved to be back in the desert.  She recovered SO MUCH BETTER when we lived in the desert.  Getting her out of the humidity will be AWESOME for her since she works so much.  She does so much better in the dry desert air.  Keep in mind, she has a docked tail.  There are barely any bugs in the desert. That will also be a massive relief for her.

I have also lived in Phoenix before (so has The Other Half), and I am extremely familiar with Las Vegas due to having been there many, many times both for work and fun trips with friends.

The north east is not for me for a lot of reasons.  I have lived in it prior to this and did not like it.  It has been a long time since I lived up here so I thought maybe it would be different now.  It's not.  Maybe if I had not lived anywhere else in the country and didn't know any better I would like it.  But, I don't like it, and I especially don't like New Jersey.  Don't get me wrong, we had a great time here, we were lucky to find a farm to lease here and have the horses at home where I have my own ring and everything I need.  I am grateful for that every single day. Though this year has been the hardest and feels like a complete waste of a year due to the awesome weather this place has had ALL YEAR LONG.  I am thankful for the time I have had here, and the friends we have made.  We're just over it, all of it, and I couldn't be happier there is a light at the end of the tunnel and that the light includes 310 days of sun a year.

I already knew the area, and I already knew where the epicenter of the equestrian world is there as well.  I've been to that area before, I have also ridden in it before.  Within 24 hours I had everything lined up for the horses.  I had my route mapped out and everything (kind of a pro at cross country moves by now).  I knew where my overnight stops would be, I had my new barn lined up, my farrier, my horse chiro, etc...

Also, one of my best horse friends that we were in New Mexico with now permanently resides in Las Vegas!  Remember the black and buckskin geldings Klein was turned out with in New Mexico?!  PONY REUNION!!!  I am SO HAPPY to have her back!

I went out there last month to take care of some things ahead of time and that just made the excitement even more unbearable!  On my way home from the USDF Awards Banquet, my first flight took me to Las Vegas, that compounded it even more to see our new home again but have to get on another plane and leave it.

I will leave you with some pics of our new home that we are SO excited about!  The area we will be living in is equestrian central.  Honestly it is kind of like the Wellington of the desert.  There are bridle paths all over the neighborhoods complete with crosswalk buttons high enough for mounted riders to hit.

The land out there harder to come by within the city limits.  People are lucky if they get two acres.  We are on six acres and I think it's an ok amount, more would be better.  We decided the best option was to board again and bought a house within a mile from the barn.  I found the girls (yes, the girls, stay tuned for the next post) a VERY nice, peaceful, immaculate, beautiful barn where we are going to be incredibly happy.  Here are some pictures from the area. 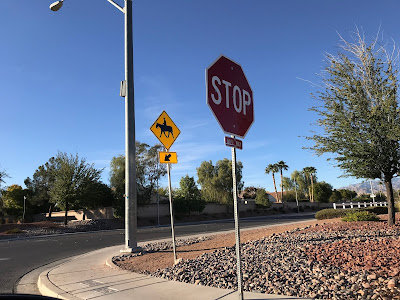 Bridle path through the neighborhood. 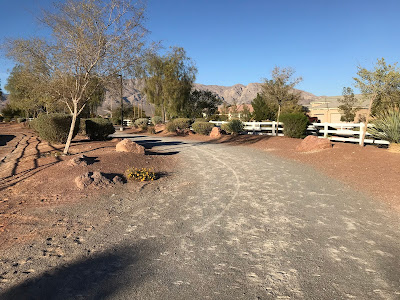 This is a neighborhood park with a full size, nicely footed arena, two 60ft round pens, and two stalls. We can easily ride to this little park. 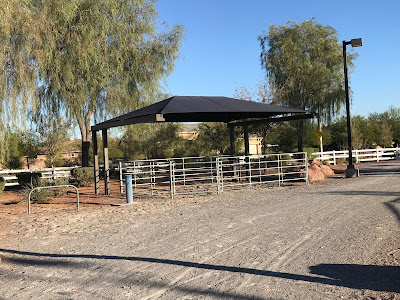 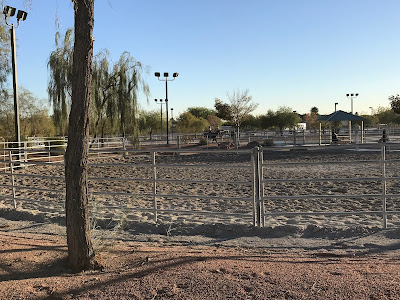 Part of the arena, yes it has lights too. 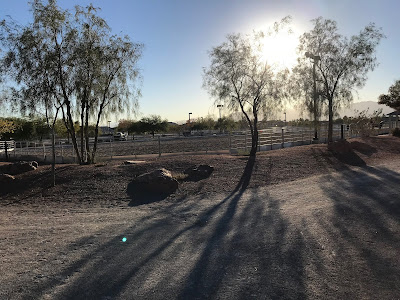 Another view of the arena. 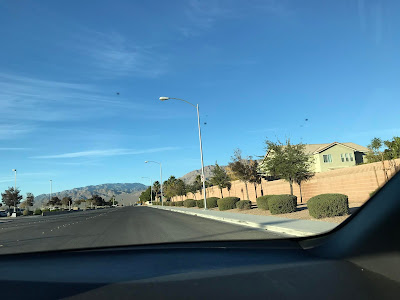 Another bridle path on the right. 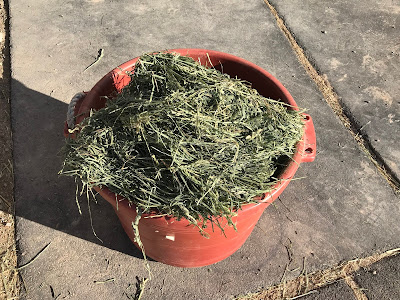 Amazing hay that the girls will have that comes in from fields at 8,500 feet in Colorado. 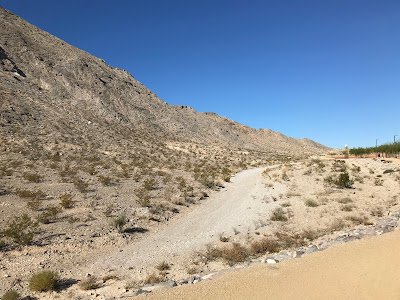 Another equestrian park. This one is a 10 minute haul away with tons of trails, a LARGE covered arena, and two covered 60ft round pens. 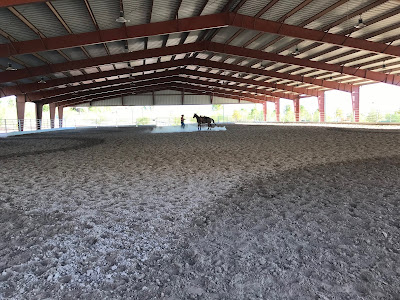 The covered arena.  It is groomed and watered several days a week (this park is free to go to). 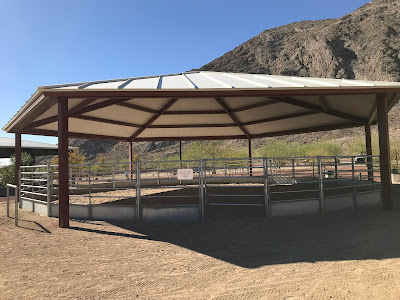 One of the covered round pens. 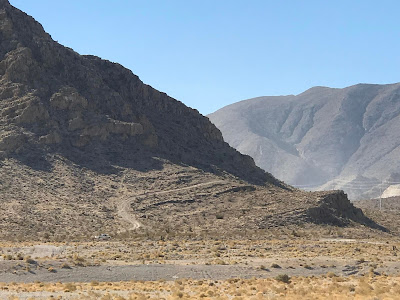 Another five minutes down the road are these trails, also free and open 365 days a year. 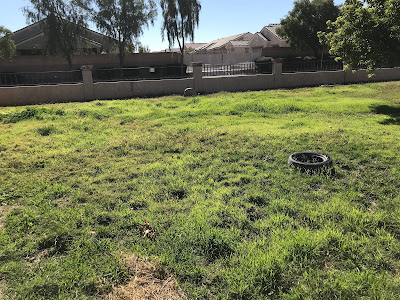 Grass turnout at our new barn. 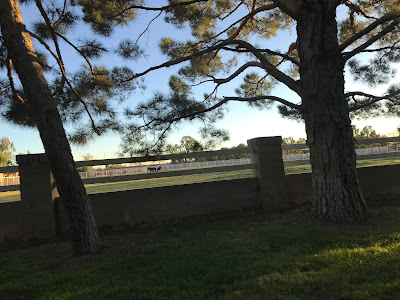 Pasture in the neighborhood.  This area is about 25 mins from The Strip. 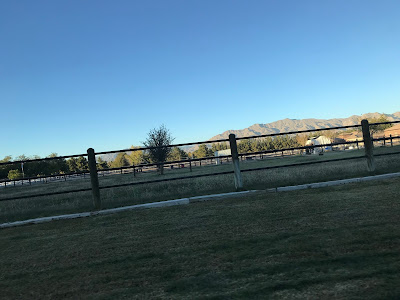 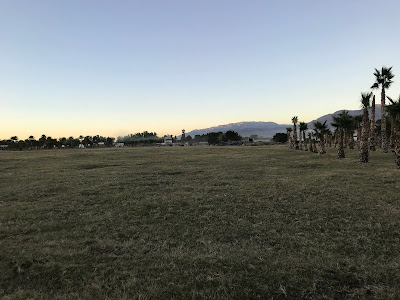 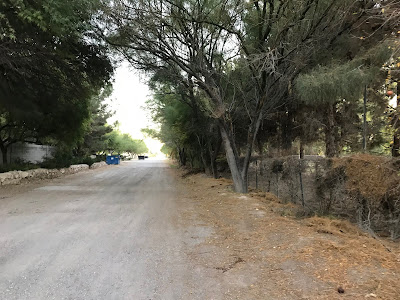 Roads that allow you to hack between barns.  Most of the barns with rated dressage shows/clinics/lessons/etc... are all hacking distance. 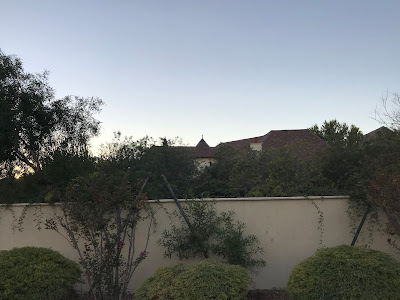 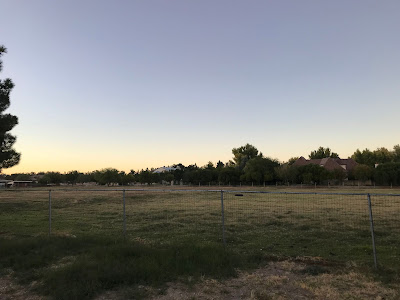 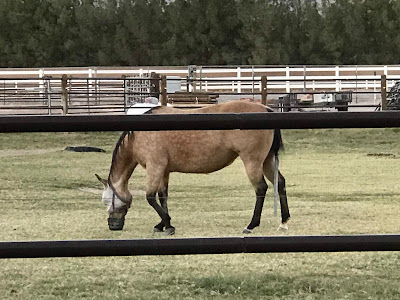 Just a horse with a grazing muzzle on...in the desert. 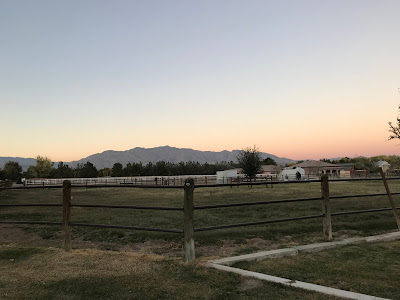 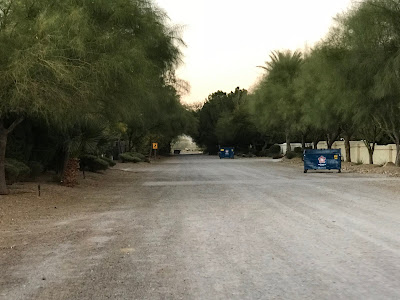 More roads to hack to go between barns for shows/lessons/clinics.

You get the idea.  In addition to multiple rated shows being not more than a hack away so are clinics with upper level riders, lessons with FEI trainers, and a state park (first pic in this post) with hundreds, if not thousands of acres to ride!

The next few posts will cover the logistics of the move and how the move goes.
Posted by The Jumping Percheron at 9:14 PM