What do you do With Your Horses While You're Gone? 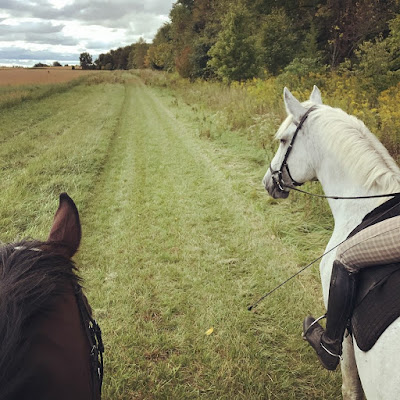 Riding with Niamh and Scout the day before I left for school.

A common question that comes up is what do I do with my horses when I have trips for work?  My work trips can vary from a few days, to a few weeks, to a few months.

My answer has always been the same over the years, nothing.  They get a staycation.  The first time I had a work trip come up in my career was right after I had started Klein.  This trip was four months long.  I could have had her in training while I was gone since I had just backed her about two months before I left, but I didn't want to.  I never want to.  I don't want people riding my horses even when I am home, so I definitely don't want people riding them while I'm gone.  I have only let one other person, ever, ride Klein for real, and that was one ride.  I say this because I have let my mom and my brother walk around on her.  That doesn't really count.  I let a GP jumper rider/trainer take Klein around for a jump school once.  Other than that, I'm the only one that has ever ridden her.

Mochs, well, Mochs is a very sensitive ride.  Since I have owned Mochs, my mom has walked around on her when she came to visit me.  I let my dressage instructor in Georgia get on her a few times to get a feel for what I was working with, to get the most out of our lessons because Mochs is a complicated little ride.  The same GP jumper rider/trainer that I let on Klein, I had ride Mochs once too.  But, that's it in the five years I have had her.

They're good mares, they don't go feral, they don't forget anything they've learned.  Sure, their fitness falls off a bit but that is a non-issue that is very easy to get back with consistency once I get home.  I knew Klein would never be an issue because when I came back from that first four month work trip I got on her the first day I got home and walk, trot, and cantered around.  She was totally fine.  She didn't forget anything, despite her first ride, ever, being six months prior.

Mochs proved the same to me this year.  She was a very green little mare when I first bought her.  I taught her a lot before she had her year and a half break due to the navicular cyst drama.  Once I got her going again this year, I started trying out things I had taught her before she got hurt.  They were all still there.

Even if there is a show that one of these trips, my decisions stands.  No one gets on my horses.  If it is a short trip, Klein is not the kind of horse that needs to be ridden every single day up to a horse trial or whatever other kind of show.  She can take a week off before a show and be ready to roll, no problem.  You're not going to lose fitness at one week.  It is typically two weeks before it begins to drop off.  If it is a longer trip that gets in the way of a show I had planned, well, there is no show that matters that much to me.  I'm still not letting anyone get on my horses, I'll just not go to the show.  Problem solved.  That is an easy decision.

I am currently on a weeks long work trip that is mandatory for my career. It is a school I have to go to that is required for career advancement.  This school falls at a time that made Mochs' lay up get an extension.  That's not bad news though, another five weeks of rest will only benefit her.  I'll be back to square one with her, but that's fine.  We worked through it this summer, and we'll do the same again this fall.  All this does is gives me more time to get her ready for spring shows.  Oh, wondering how her hip feels?  Here, let me show you.  This was the day before I left for school:


Notice she is kicking out with her left hind, that is the hip that was injured.  I repeat WAS, because it clearly isn't bothering her.

The Other Half is fulfilling his single parent duties right now and doing an amazing job as always.  I never worry about anything when I have to go somewhere.  I do have a very trusted friend on stand by right now for back up help should he need it if there is some kind of injury while I am gone that he would need help with.

For previous work trips I have also had a very trusted friend (the one I visited in Vegas earlier this year) take care of Klein when she was still an only child.  This friend and I were on the same page about pretty much everything from horse care to our opinions on non-horse related things.  I miss her terribly and wish we were closer.  I never worried about being gone for a couple months when she was taking care of Klein.

It usually takes about two weeks for reality to set in for Klein that she really is on a break.  Here she is throwing a fit about it.  This was a few evenings after I left.  And how adorable is Wes trying to get in on the mares losing their minds?  Normally he ignores them and acts like he doesn't know them, like he does in the video with Mochs taking off.

And part two of that ridiculousness:

The real downfall in all of this is leaving behind The Other Half after he JUST got home and having to wait for more fun rides with friends.  The day before I left Niamh and Scout met Klein and I at a local park and we had an awesome time. 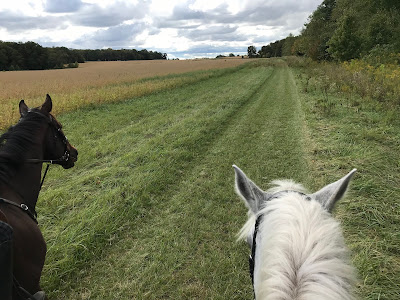 Klein and Scout being model citizens. 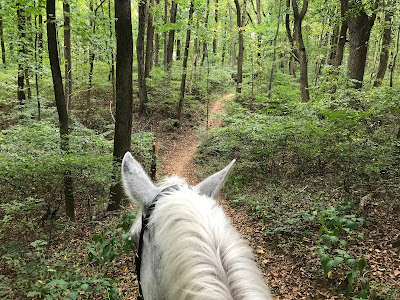 Despite what Klein thinks, it's also not a bad thing for her to have an extended break here and there.  That mare would run herself into the ground if I let her.  She has no chill when it comes to work.  It benefits her physically, no matter how much she thinks it doesn't.
Posted by The Jumping Percheron at 12:37 AM