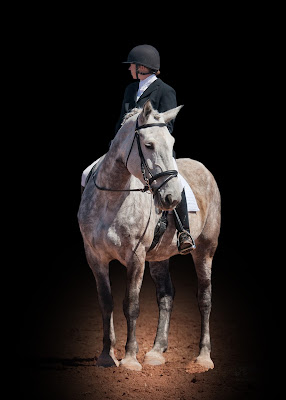 I have always been a mare person.  My first horse was a mare.  Even after being told by the previous owners that she would never be a good kid's horse, my little, red, QH/Arab mare was this 7 year old girl's best friend in the world that never refused a thing I asked her.  Why would my mom get me a horse that would never be a good kid's horse?  Because that little mare was in a bad situation.

She had been attacked by a dog on her right hind fetlock at the dude ranch (http://www.cherokeeparkranch.com/ - don't get angry, I highly doubt any of the people that were there then are still there, I just wanted to show you the beautiful place she came from) she was a trail horse for.  The damage seemed to be under control, but the dude ranch had decided that she wasn't worth her vet bill and the potential soundness issues that may plague her from that point on, and told the vet he could just keep her and do whatever he wanted with her.  The vet didn't need any more horses, he had plenty of his own.  My mom was one of his techs and despite the "she'll never be a good kid's horse warning" from the previous owners, at this point, what more did this mare have to lose?  My mom had everything to gain by getting her horse crazy 7 year old to shut up with the "I want a horse" speech every single day of her life.  She had been dealing with it since I first learned to talk.  Also, I'm not sure that a warning of any type holds much weight coming from people that didn't feel a young mare was worth her vet bill to them.

I remember the first time I saw my mare.  She was sulking at the back of her run at the vet's office.  I would go as much as my mom would take me with her to see all the animals regularly.  The first sight of this horse is forever burned into my head.  Little red mare, two white hind stockings with a star and strip on her face.  I felt bad for her, but I didn't go near her because at that point I had no reason to, and I had no idea she would be mine.

From the first time I got on her were instant BFFs.  That mare that would "never make a good kid's horse" take care of me until the day we said good-bye.  I did all the dumb things you do when you're a kid:  ride standing up, jump whatever type of jump I could build, hang off the side of her at a full gallop trying to do "stunts," you name it, she was game.  Not one time was she EVER nasty in any manner.  Not once did she ever refuse anything I asked, not once did she ever try and dump me, nothing.  She was an amazing horse, and she is probably what set the wheels in motion for all this die hard mares for life stuff.

What's the point of this?  I have been noticing a lot of mare stories popping up across equestrian social media lately, and I love it.  These are my people.  They get it.  They know what a good mare is like, they are like nothing else in the world.  Notice we all say the same thing, once you bond with them, they will try until they can't try anymore.  Look at Klein, that girl would pull me out of the burning building, because she knows I'd do the same for her.  While I haven't had Mochi as long as Klein and didn't get her as a two year old (rather a 9 year old that had multiple owners and next to no training), she is all heart and once I finally figured her out and undid some issues from previous owners she wants nothing more than to do whatever you ask correctly.  She tries unbelievably hard.

My experiences with mares have been nothing like your typical mare opinion.  They're not moody, they're not nasty.  They're amazing teammates that are 100% with you.  These experiences have made me a mare person for life.  No offense to Wes of course.  He's the exception, obviously, but there is even a VERY stark contrast between Wes and Klein's personalities, despite both being drafts.

In case you haven't noticed the mare trend lately, here are some of the articles:

"The main reason that I'm 150% behind mares is that they will give you 150% in return once they trust you. I think they will work harder for you, because once they learn to trust you they develop a bond with you that's completely unlike any other bond with any other rider. You become their person."

"There are a lot of riders that need a confident horse to draw their own confidence from. Mares aren't always an amateur-friendly horse because the amateurs don't always have the education and tact to teach the mares how to be confident and to trust them, all while not taking advantage of them. Many riders often misread their mare's negative behavior and take it personally, which is the biggest mistake you can make with a mare; or any horse."

"'They are not 'dumb boys'" Rigdon Blake jokes. "And that's why people don't get along with them. They don't forget! If you do something that's really special for them and praise them, then they work harder for you, but if you take them for granted in anyway - they're just like women - they don't forget!"

"She’s a mare. I don’t want to say she’s opinionated, but I feel like there’s a constant conversation going on. She’s not a dead-head plug, she’s always checking in and having a conversation with you as you’re riding. [As a young horse] as soon as she figured it out once, she would just do it over and over again. She was always so honest to the fences and always willing to figure out whatever I was asking her."

The Most Unlikley Horse of a Lifetime

"In our entire career together, she never once let me down."  "...she always held up her end of the bargain."

One to Watch: Booli Selmayr Will Tackle Pine Top on a Game OTTB Mare

"Jaeda’s not really that type of horse. She’s very athletic and awesome to work with, but she’s definitely not an adult amateur horse. She’s just too hot. She likes to have her person."

"She’s actually quite sweet, but she’s not going to come up to you and cuddle. She likes to observe you and go, ‘Thank you for your time, move on now.’ She’s a very workmanlike horse, so like, grooming is part of the job. She’ll stand there and be groomed, but she doesn’t want to be fussed with. She wants everything done because she’s on the job all the time."  (Ha, she just described Klein perfectly.)

"She’s a loner. I think that’s why she loves the cross-country. It’s her and me. That’s what’s really fun about working with a mare as well, it’s different than the relationship I had with Castle Diamond and my new horse. They’re geldings, and they’re so sweet; they’re bros. And with her, you’re really a teammate. There’s that womanly respect for one another, and it’s cool. When she starts to have her fit, you just have to be supportive. It’s a really intellectual relationship when you’re on a mare."
Posted by The Jumping Percheron at 10:07 PM

Email ThisBlogThis!Share to TwitterShare to FacebookShare to Pinterest
Labels: Mares