Do Something, Eventing, Part 2, Investigation

"We're all going to die someday," that's another ignorant blanket statement to make.  But, if there was something that you could do to prevent an early death doing something you participate in regularly, wouldn't you want to know?

One thing I repeatedly see in forums and in the comments section on various social media posts is "well, riding is dangerous," or "everyone knows the risk when they get on a horse," or "riding carries an inherent risk."  Stop.  That's an insulting, ignorant statement to make when talking about this particular scenario, riders dying on cross country.  Riding is inherently dangerous?  No shit. 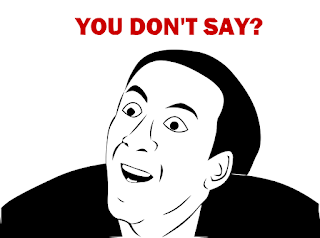 Everyone knows horses can easily kill us in about a million different ways, any day of the week.  But, does that make it ok to have that attitude?  Does that make it acceptable that people are losing their lives on cross country?  Absolutely not.  It's a dismissive comment/attitude to an actual PROBLEM.  Complacency kills.  Remember that.  Also, why would you not insist on some type of investigation in an attempt to figure out what happened?

There is another very tired saying people seem to use a lot on this subject as well, "you have a higher chance getting in a wreck and dying hauling to an event."  So?  And you know what?  Law enforcement would be out there investigating and documenting IMMEDIATELY, even though it was "just another fatal traffic accident, thousands happen everyday."  They try to learn from these things, they try to figure out what went wrong, who's at fault, and if it could have been prevented.

The same goes for the world of aviation.  Statistically, the same can be said about dying in an aircraft crash when it comes to the whole "you have a higher chance of getting killed doing xyz" statement.  In this case, just driving to the airport.  Does the FAA and the NTSB take the same cavalier stance and say "well, your chances are higher of dying while driving to the airport, this was a freak thing, it's not like planes fall out of the sky every day."  No, they don't.  A MASSIVE investigation is launched IMMEDIATELY.  The eventing community SHOULD want the same.

We appointed subject matter experts to help interpret the information we received as well.  For example, we appointed a highly experienced crew chief for that particular type of aircraft and had him read through the mechanical autopsy and asked him if certain things were normal, common problems, etc...  We appointed instructor pilots for that particular aircraft as well to help us decipher the crew's actions and if that was standard procedure that was taught in training.

At the conclusion of our investigation, we compiled a large report that is publicly releasable and states what our findings were, as well as everything we did during our investigation.  Different tabs are attached to the report and they contain witness statements, training records, etc...  Certain information is redacted, and pseudonyms are used to protect privacy where appropriate.  An example, we used a pseudonym for our subject matter experts so that they were comfortable pointing out any issues with maintenance or crew procedures if they existed.  That way the subject matter experts would not be identified by their friends and looked at as if they tattled on their own people if they did identify crew or maintenance error.  They felt they could speak candidly knowing their names would never be revealed in the report.  We had to have brutal honesty, and that is one way to ensure it.  All interviews are recorded, transcribed and included in the final report with pseudonyms applied and sensitive information redacted (things like deployed locations and call signs are redacted).

There are also programs that will make a computer generated re-enactment.  Here is one as an example with a 747 going off a runway in Maui:


Here is a longer video that has a narrative of what is going on with the jet and what the pilots are saying:


These programs can re-create everything, to include a horse and rider fall.  I know people say "I don't want to see that."  Do you, or do you not want to learn from accidents?  Do you want to keep dismissing these incidents as freak accidents and refusing to WANT to learn what went wrong?  Why would you not want to know if something went wrong?

These videos are not a smear campaign on the pilots or any of the crew.  These videos are simply illustrations of factual events based on video or data pulled from the aircraft's computer systems.  Yes, in some of them the accident IS a result of a crew error.  Again, it's not a jab at the crew, it's facts.  People make mistakes.  Wouldn't you rather know if these accidents in eventing were a mistake in the design of a jump or the error of a person for sure?  With actual in-depth investigations we have a much better chance of deciphering that instead of just saying "well, shit happens. Riding is inherently risky" and shrug it off until the next one happens.

Why isn't there a push for something like this?  Why don't they want to be transparent?  Why don't you care more?  Why do you still support something that dismisses your safety, as well as your horse's safety?  I think I know, because it's fun and it's easy to just say "shit happens."  I'll tell you again, complacency kills.

Then next post will have some data in it from these fatal rides.
Posted by The Jumping Percheron at 7:46 AM