The Dressage Show that Wasn't 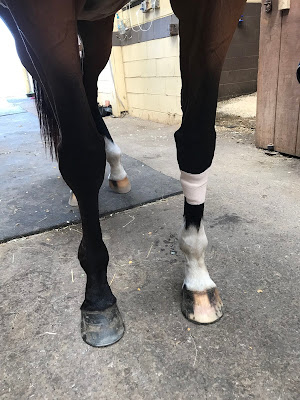 Last month I put Ms. B in another dressage show.  Once again we were at a show in the pouring rain because New Jersey's weather is broken this year.  Ms. B warmed up great and into the ring we went.  About halfway through our test I heard the bell.  I knew for sure I didn't have an error on my test so I was surprised and had no idea what the judge saw.  She yelled out to me "Stacey, I don't know if you can see it, but your horse has a bloody leg!"  Cue heart attack.  A bloody leg?!?!?!  I asked her if I could just dismount in the ring and she was happy to see that I even offered to do that.  I jumped down to see Ms. B's left front leg bleeding like someone stabbed her.  I have NO idea how she managed that.

I walked her out of the ring and people in the warm up were asking what happened because that was NOT there two minutes earlier when we went into the ring.  The source of the bleeding was a tiny cut on the inside of her left front, just below the knee.  That is also the front she has a sock on so of course it made the blood show up extremely bright.  I have no idea how she managed to get that cut.  She didn't stumble, she didn't kick herself, and even if she did how would she have gotten a cut that high up her leg??  It's one of those horse mysteries where they hurt themselves and you spend the whole day going over your pasture/barn with a microscope only to find absolutely nothing.

It was pretty much done bleeding by the time we had walked out of the warm up and headed over to the hose.  I hosed her leg off and looked at it closer.  Nothing but that little cut.  She didn't even feel it.  I doubt she ever knew it was there.  I decided to just scratch our next test.  The ladies in the office said I could go back for the next test but I said it was ok I wanted to make sure Ms. B was ok.  You never know.  Better safe than sorry.  Also, I can't guarantee that the cut wouldn't start bleeding again and we would just have the same outcome, the bell.  It was still pouring so I really wasn't that sad to just get Ms. B untacked, loaded, and be on our way.  It was just a schooling show and she was great for the time we were working there.

There was a bit of swelling around the cut and the swelling reminded me of a popped splint, though I have never seen one that was accompanied by an open wound.  After some researching I found and open wound with a popped splint isn't that uncommon.  She was never lame from it.  She just had a chiro adjustment and actually feels amazing right now.

That little cut wasn't healing too quickly either, so I had the vet come out to see exactly what it was.  I can't deal with guessing about something.  I need to know.  The vet came out and did an ultrasound and found it was definitely not a splint and in fact it is just a small wound.  However, there appeared to be some kind of dirt/debris in it and that is the reason it wasn't healed yet.  SMZs, bute, and a bandage with an Animalintex pad over it for the next five days was the plan.  Whatever was in there would be drawn out.  She also stuck hemostats in there to open it up a little more.  This entire time, B just stood there.  Stood there while she clipped the area around the wound, stood there for the ultrasound like a statue, and also didn't flinch when the vet stuck the hemostats in the wound to open it up more.  She is the best patient.  She puts up with so much.  Even with her SMZs and bute, she takes everything like a champ.  Thought I do mix them with applesauce and put them in a syringe hoping to take some of the nasty taste away. 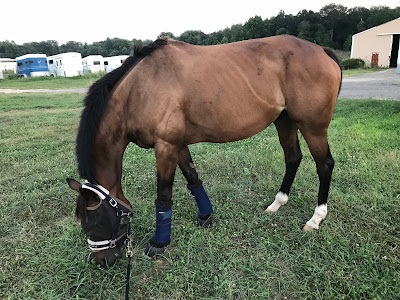 I wrapped her to keep the elastikon bandage clean and dry since she stays out.

After the second day of Animalintex I did find what appeared to be little pieces of something. 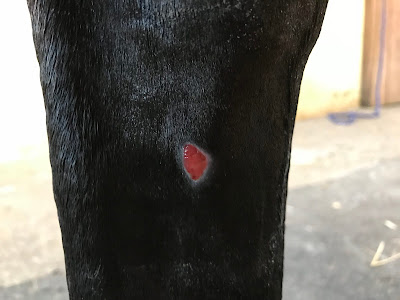 All cleaned up and ready to be re-bandaged on day two. 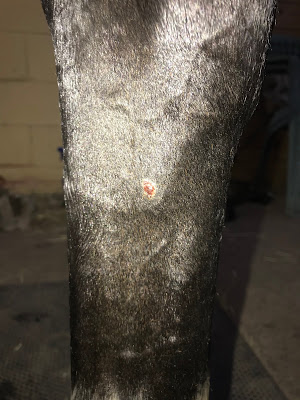 At the end of the five days the cut dried up and healed quickly.  She is feeling and looking GREAT.  She seems to just feel better and better. I have seen her break out some fancy moves in the past week.  I can't wait to bring more of that out under saddle. 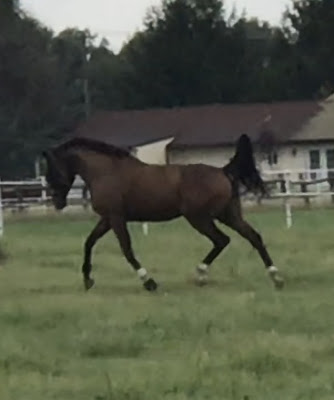 Busting out some moves one morning last weekend. 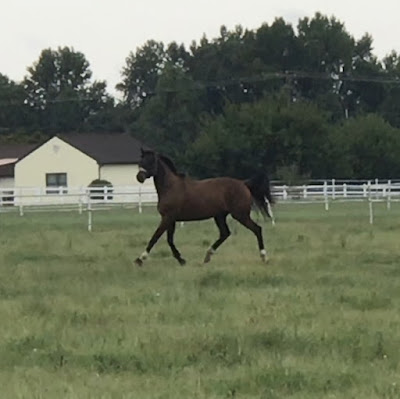 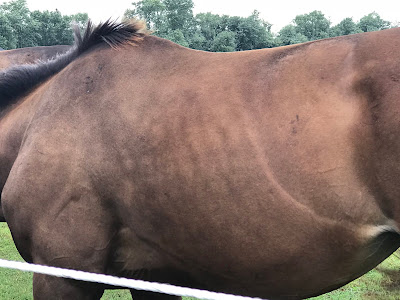 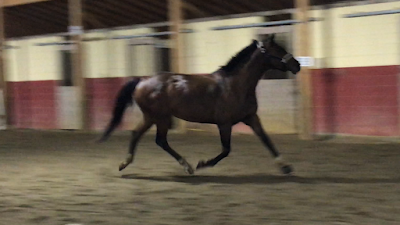 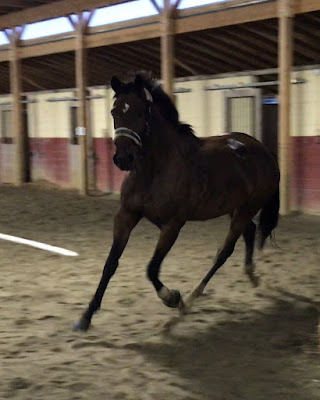 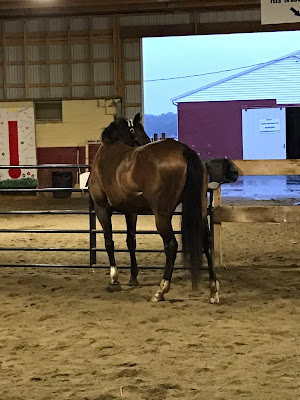 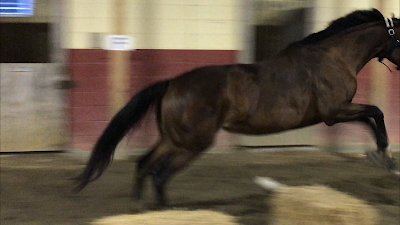 I totally had no clue she was going to start jumping stuff on her own or I would have been more prepared with video.  I was just letting her run around in the indoor while I looked for her sheet since the weather was so disgusting this week. 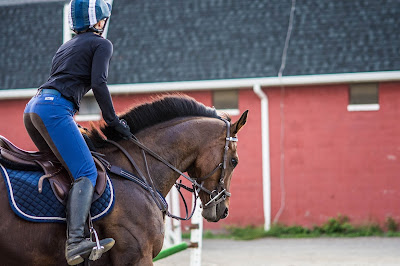