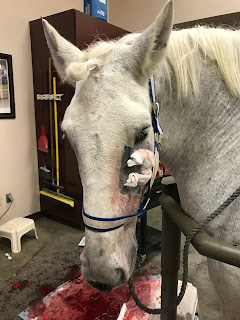 Klein's surgery went really well yesterday.  I will warn you now, there will be graphic picture of the procedure in this post.  It looked very invasive, but it is a somewhat routine surgery.  I think that is why I could watch it.  That, and the fact I wanted Klein to know I was there with her.  After Super B's colic surgery last year, I think my nerves are deadened enough to put up with watching a lot more procedures on my animals.  People, that's not a problem.  Animals, I've always been the person that demands the channel be changed whenever the ASPCA commercials come on.  I have a really hard time looking at posts about abused/neglected animals or even just ones that need homes.  My heart breaks.  Yet, I am an MFS, am halfway through an MFM, and deal with the some of the worst of humanity on a daily basis.  I have held a decapitated human head, with absolutely no second thought.  But kind of like the saying "there's someone for everyone" it's the same for occupations.

My vet warned me that this procedure is very bloody.  She also warned me about the hammer.  So I knew what I was getting myself into.  The left side of Klein's face was blocked and she was sedated.  That's why she appears to not really care in the video.

The whole thing took about an hour and a half.  Basically, a bone flap was cut so they had access to the sinus and above the tooth with the dead root.  The appropriate term for the procedure is "Dental Repulsion of 209 through Maxillary Sinusotomy."  There was already a bone response going on where the bone was remodeling where the dead tooth was.  Some of that had to come out so that the dead tooth could come out.  The dead tooth had six roots too.  It was not loose at all either.

Globs of pus came out of the sinus.  I cannot imagine the sinus pressure and headache my poor girl has been dealing with.  Through all of this her attitude never changed.  Beyond being a little lethargic she never once had any attitude about anything.  These types of horses can be in some serious trouble in the wrong hands.  If you aren't committed to finding out the actual cause, even though the horse is still just slightly out of sorts and won't refuse anything you ask, you probably don't need a horse like this to be honest.  Klein won't quit, if I asked her to go out and jump a course right now, she would. 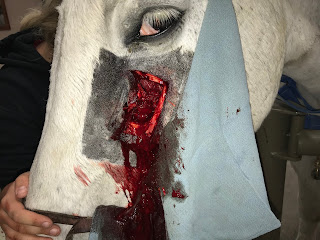 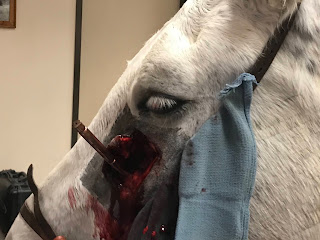 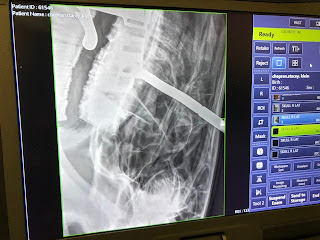 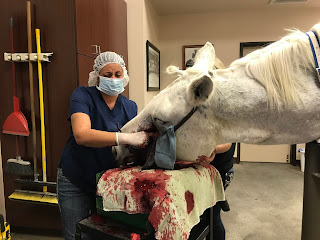 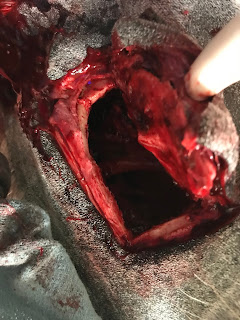 After the sinus was cleaned a bit and the additional new bone was removed the hammering started to essentially punch out the tooth.  They each area of the tooth start to give until it finally came all the way out.  It took quite a bit of hammering.  You could clearly see the little hole in the tooth too.  All of it came out when it let loose from the hammering, so that was great.  No little pieces were left, meaning no additional digging, poking, prodding.

After that was out they flushed and cleaned the sinus, put in a medicated putty where the tooth came out, put the bone flap back in place and closed it. 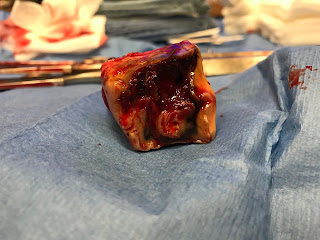 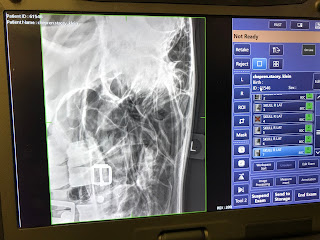 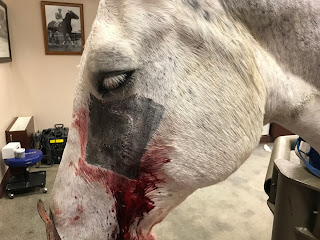 Within a few hours she was allowed to have her hay again.  I went to see her that evening and took her for a walk and a hand graze.  She acted like nothing ever happened.  If you didn't see the bandage, you would have no clue what went on just hours before.  The putty will fall out on its own once the gum has healed where the tooth came out. 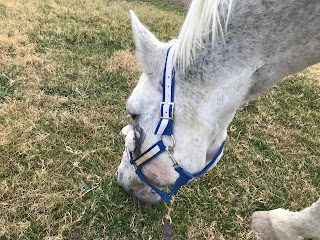 My vet let me know first thing this morning that everything looked great and she had the green light to come home.  She will have a follow up I will take her in for on Friday morning, then her staples will come out in two weeks.  I can start riding her now as well.  Which, will just be long walks for the next couple weeks anyways.  She's out of shape, so we'll start back slow.  She did gain a little weight while she was on her vacation, so that needs to come off a little bit. 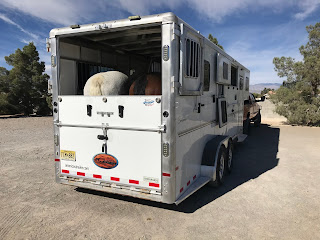 Unicorn reunion!!  I took B on a little field trip this morning's ride anyway, so I just took her with me after we were done with our ride to go get her BFF.  She was SO happy to see Klein.

She has a VERY minor amount of drainage.  It is barely noticeable, and it will just continue to fade away.  It's already significantly less than when she had the infected snot drainage.  I am just so relieved it's over and done.  She already seems brighter overall.  She even did when I went to visit her yesterday evening.  The rest of the recovery seems incredibly easy, so I am thankful for that too. 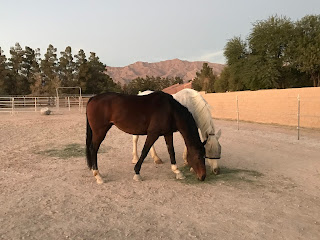 Posted by The Jumping Percheron at 12:40 AM