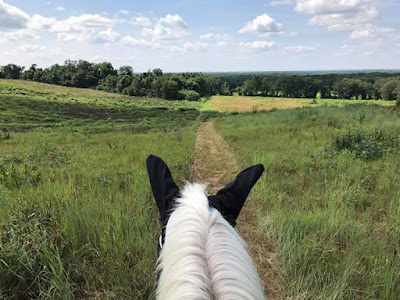 Some people have asked if Klein is ok because I have been putting more time into Moch in the past couple months.  Yes, she is absolutely fine.  The reason that Klein hasn't been out and about much the past couple months is because these are the hottest months.  I did compete her here last summer, but in July she was hot.  The humidity here can get pretty gross.  Gross to the point where it rivals South Georgia.  I decided to do what I did in South Georgia, backing off her work during the hotter months.  There is no point to keep her galloping in the heat and humidity.  This is not the way I make my income, I don't HAVE to show for any other reason than if I feel like it.

Sure, Klein CAN be kept fit in the hotter months, but I don't feel like that's really fair to her.  I have worked in heat and humidity.  I have CrossFitted in a South Georgia CrossFit with no air conditioning all through the summer months for a couple years, I've been in full chem gear (chem suit, mask, boots, gloves, gas mask, etc...) rolling around in the woods with a gun for work in NASTY heat and humidity, I've ran half marathons in the desert in the middle of the summer.  I know it's not the most enjoyable of times.  You really can't dull Klein with working in the heat and humidity, she just keeps going, but I'm not trying to see if she can go through another little bout of anhidrosis either like our last summer in the south.

This was right before her summer break started.

Warm up from the same day as the water complex video.

However, my problem is that she LOVES to work, which really isn't a problem until you back her workload down.  To avoid this, I pick the least offensive summer days and hack her, do some dressage, maybe a light jump school, if it's a really nice day I'll let her get some galloping in.  This way she still works a couple days a week. 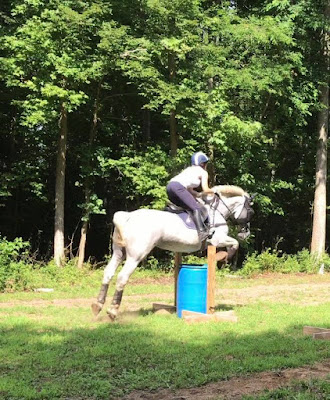 This was one of our quick, easy jump schools before the heat/humidity hit one morning. 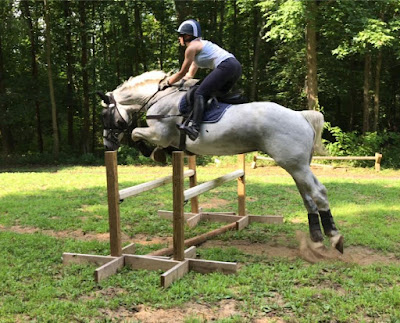 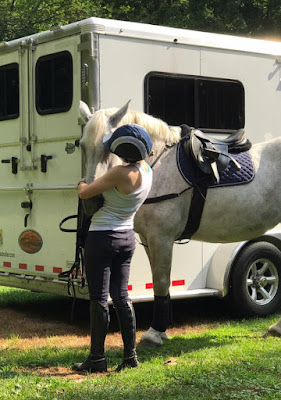 I thought this light workload would be acceptable, but, it's not.  She gets a little stir crazy when her work load is light, and she takes it out on Mochs and Wes.  She doesn't chase them around, she's just crabby.  All of sudden The Fun Police is out in full force, issuing citations left and right for things like unauthorized drinking of water from the stock tank without prior permission.  But, put her to work, and like magic, her attitude adjusts and she's totally zen, The Fun Police forgets that there is a citation quota.  We had a couple weeks of exceptionally disgusting heat/humidity and her workload dwindled then.  It was at that point, I knew...that was unacceptable to her.  She took it out on poor Mochs, and that is a whole other story I will get into soon.

Now that we are getting some breaks in the heat, I have been gradually increasing her work again.  I've also been making sure to get her out for hacks away from home to keep her mind occupied.  While I was taking Mochs out a lot Klein would nicker to me after I loaded Mochs on the trailer like "Why her?"  Or maybe she was laughing at Mochs saying "better you than me," but I highly doubt that. 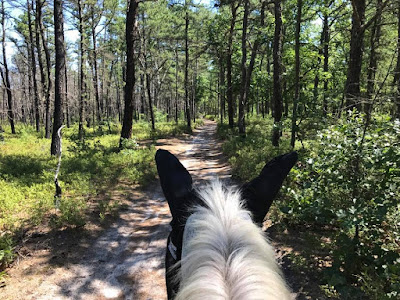 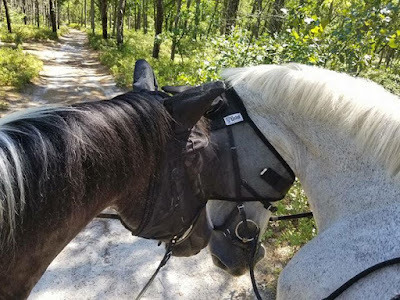 Socializing with one of the rare horses that she actually LIKES.  This guy is a sweetheart and she has always seemed to acknowledge his existence.  If she doesn't like a horse, she'll just give them the equine version of the silent treatment and act like they're not even there.

And no trip to this spot is complete without letting her play in the water a little bit.  And since everyone asks, no she doesn't roll.  She has never acted like that thought has ever even crossed her mind in all the years we've been doing this.  Not in the ocean, and not in rivers like this. 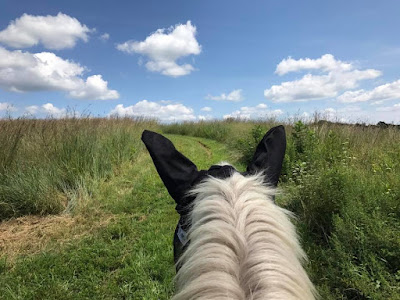 From a gorgeous day two weeks ago.  We had to take advantage and load up and go somewhere for the afternoon.

Here are a couple videos from my helmet cam that day of some hill repeats we did. 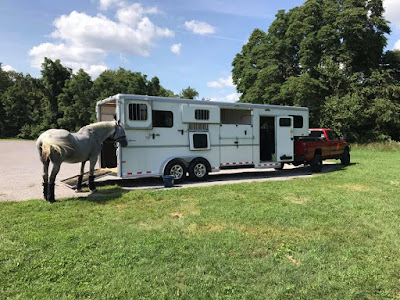 Relaxing after our hack before loading up to head home.


And that is what Klein has been up to.  She's just fine!
Posted by The Jumping Percheron at 10:45 PM