I have always wanted to give EquiVibe a try but I have never had the chance until today.  I have read about them and even seen them in barns but never had a chance to put a horse on one.  Vets, rehab barns, equine hospitals, and performance barns all use EquiVibe.  I have seen eventing barns with upper level horses that have their horses on their EquiVibe in their ice boots after gallop sets or xc schools.

Recently, I found out there is an EquiVibe rep not far from us that travels with hers, so I set up an appointment for this morning.

I thought TheraPlate and Equivibe were the same and it turns out they are not.  TheraPlate's vibrations are horizontal while EquiVibe's are vertical, sending the vibrations further up the horse's body, making the therapy more effective.  This is from EquiVibe's site:

The EquiVibe is for performance, rehabilitation, and preventative care.  So basically, any horse can benefit.

My reasoning is of course Klein because she is in work, Mochi because she is dealing with her Navicular Cyst, and Wes because why not?  I was hoping it would just loosen him up a bit.  However, Wes has been battling an abscess all week, next post I will tell that story.  So anyway, of course I already had the appointment set before the abscess showed up and I crossed my fingers he'd be up to still getting on the EquiVibe.  Luckily the past two days he has had significant relief and his lameness is steadily decreasing with each passing day.  So now, instead of just overall benefit, I REALLY wanted him on the EquiVibe after he had been walking around so off balance this whole week.

Side note, it is deer season right now and there is a group of guys that hunt in the fields across from our house.  The horses ALWAYS watch them.  Guess who showed up about five minutes after the EquiVibe did?  Of course.  All three were running around with the girls bucking and snorting.  Klein doesn't like people in the fields across the street.  She ALWAYS has a fit when they are over there.  It's like she thinks they need to come over and ask her permission first.  She runs around throwing a hissy fit like "How DARE they?!?!"  I have pictures somewhere from her doing the exact same thing last year when they were over there.  I hoped we could compromise with the ponies by having them on the EquiVibe facing the fields so they could still monitor the activity across the street. 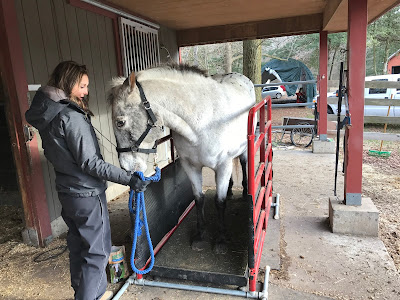 Mochi went first and she was great.  After walking her over it a few times she stood there nicely.  I took a video clip of her:

Wes was next and it only took him a couple times of walking through it to stand there.  He was a bit concerned with making sure the mares were ok since they were still having a fit about the people across the street, but I was just happy he was mobile enough to walk onto it and stand there comfortably after being so uncomfortable earlier this week.  While he was on it, the hunters also chased a little herd of deer out of the woods and fired on them (it's shotgun season right now).  Wes watched the whole thing and was a little concerned but he still stood there like a good boy.  Btw, the EquiVibe has a weight limit of 2,400lbs so it had no problem holding Wes who is only about 1,800lbs. 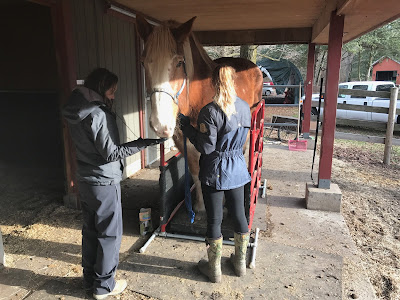 Such a sweet boy.

Klein was last, and she was still pretty concerned about the activity across the street, but she put up with standing there since she still had a visual on the people that were dragging the deer they shot back to their truck. 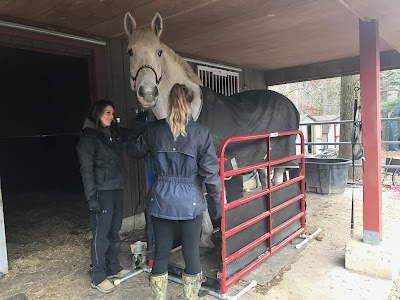 Still monitoring the what she deemed to be unauthorized activity across the street.

Each of them were only on it for 15 minutes today since it was their first time.  The max setting they did was 30Hz.  The highest is 60Hz.  Next time they can go longer and experience higher settings.

Here is an interesting documentation of pre and post treatment.  I have a temperature gun like that and I wish I would have thought to hit Wes' abscess foot before and after.  We have been watching the temp in that foot with it this week.  When the abscess first started to show itself through lameness, The Other Half grabbed our temp gun and found that his left front was 10 degrees hotter than his other hooves. 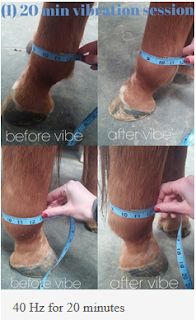 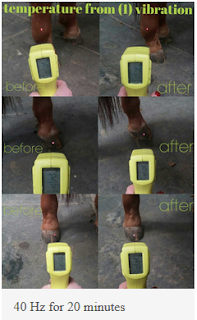 Danielle, the girl that has the EquiVibe, was saying that on higher settings you can see the veins pop in horses because they are actually working, they will also get sweaty.  I could see their muscles twitching today.  Not only is it used for rehab, and recovery, but also for conditioning when the weather isn't the greatest.  That way the horses are still getting a form of conditioning.  Some barns actually include time on their EquiVibe in their conditioning programming for their client horses.

I will absolutely make this a regular thing for them.  I didn't ride Klein today, it was a rest day for her, and we had things planned to go do after Danielle came out.  I will ride Klein after the next time she is on it and see how she feels.  Normally after a chiro adjustment I can feel a difference in her, so it will be interesting to see if she feels any different.  I will also put her heart rate monitor on while she's on it just out of curiosity.

If any of you are in NJ, PA, DE and you are interested in having Danielle come to your barn, you can reach her at 609-240-1411, she also does a rewards program too for her repeat customers.  She is super nice and very knowledgeable not only about her product but about horses in general.  You can tell her horses are her kids, too.  If a horse isn't comfortable walking or standing on the plate she is in no rush to get them on there and is very calm with them.  That always says a lot with equine professionals.  She also goes to shows, and if she is at any events this year I will definitely have Klein on the EquiVibe after xc.
Posted by The Jumping Percheron at 9:37 PM