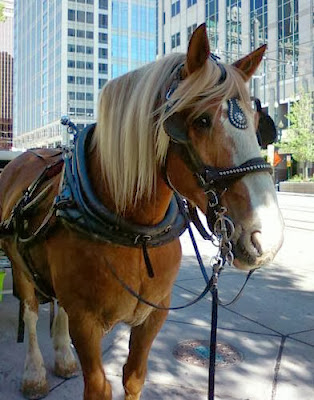 On the first Jumping Percheron blog many of you might remember my stories about Wesson and how I used to drive draft horses in Salt Lake City for a carriage company.  I had made a few posts here and there about Wes, his story, and how much I miss him.  Well, the time has come for him to officially retire.

I met Wes before I joined the Air Force while I was still working for the carriage company.  He wasn't there when I first started working there.  He showed up one night after the owners went to a draft auction in Denver.  He came with a teammate too.

I remember the first night I saw them.  They had just come off the trailer from Denver a couple hours before I got there.  It was a cold October night, dark, and I had a non-horsey friend with me.  Smith and Wesson were half asleep standing right next to each other like they were harnessed together.  They had mohawk manes and looked like full on war horses that you wouldn't want to meet in battle.  My non-horsey friend was hilarious.  He just could NOT understand what he was seeing.  "Oh my god...they're HUGE.  I've NEVER seen horses that big IN MY LIFE!!!!  THEY ARE HUGE!!  That's ridiculous!!"  Me on the other hand...I was instantly in love.  Love at first sight.  I thought they were hands down the two coolest horses I'd ever seen in my life. 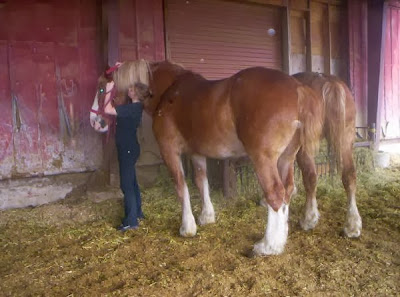 They actually came with names like "Bob and Bill" but obviously those names were much too boring for these boys.  I volunteered to start working with them because they had to each start driving single, which is tough for a team to learn.  The owners let me re-name them because I was so in love with them and spending all my extra time with them, even my day off.  Yes, I worked six days a week most of the time because that job was not like a job, it was more like a privilege. 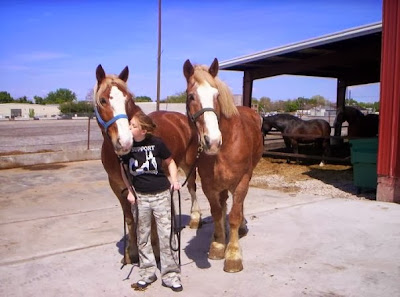 Smith (right) and Wesson (L), this was the day before I went to basic training.  I had come to say good-bye to them and promise Wes I would be back for him.

I started working with both of them and while I loved them both Wes and I just seemed to click.  Eventually they each got their own personality and Smith actually would gang up with the other horses and pick on Wes.  Wes was the biggest boy in there at the time and the lowest man on the totem pole.  He really is a big baby. 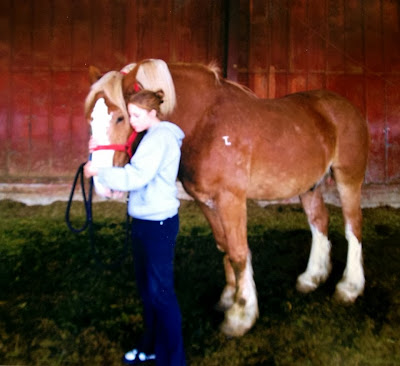 At first they even had a hard time walking in a straight line in harness without each other.  They would want to do a 180 and just look at me in confusion like, "You...want me...to work...without MY OTHER HALF???"  Slowly they each got over it. 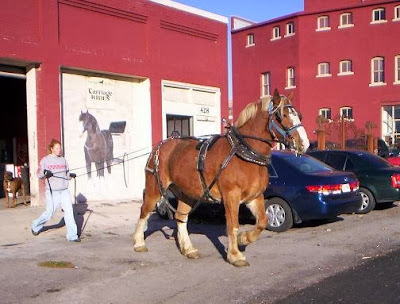 Starting Wes to drive single.  He had SUCH a power walk, I almost had to jog sometimes to keep up with his big, determined stride just at a walk.

Smith seemed to settle in a little faster.  He was a little older than Wes too.  I actually hitched Smith up first and took him out for his first night of work.  A couple weeks later I felt Wes was ready.  I remember the first day I hitched up Wes before work and we went for a short drive through downtown.  That was our test run and I felt like he was ready to go out and pick up customers. 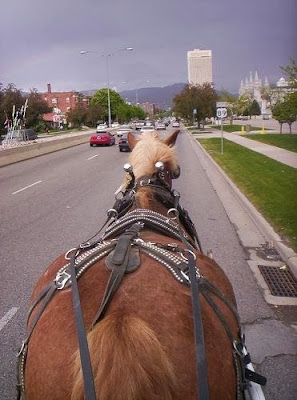 Smith and I on our way out to work one evening. 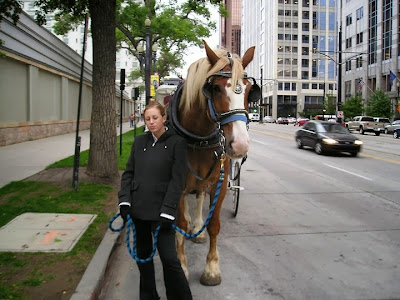 Success!  Wes and I at work one evening.  I really wished I didn't ruin this picture by my eyes being closed.  Wes is just as handsome as always.

We had good times out on the street.  We picked up a lot of interesting people with interesting stories.  We did countless wedding proposals, luckily none of the girls on the proposals we did said no.  We picked up lots of brides and grooms and took them to their hotel from their wedding.  We took Christmas carolers.  We got yelled at by protesters.  We went through a ton of drive thru's for snacks, I would always order Wes a fruit and walnut salad.  We had people try to spook Wes, even by blasting an air horn at us one night.  Wes never did much more than lean into his harness a little and I'd tell him "Oh we're ok boy" and he'd relax.  He never gave any of those people any satisfaction of spooking at any of their ridiculousness.  We have navigated through heavy traffic, through snowstorms, you name it Wes and I probably have done it.  Oh and one of my favorites, lots of passing by storefront windows, Wes seeing his handsome reflection and whinnying at it.  I also remember crying a lot over having to say good-bye to him.  I cried for months when I got to my first base in Hawaii.  He is actually the reason I have Klein.  He made me fall in love with the draft mind and personality. 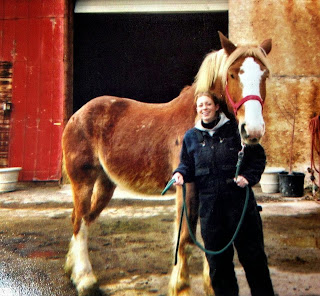 Wes and I getting ready for work one winter evening.  I have 85 layers on, Wes is hairy as a yak. 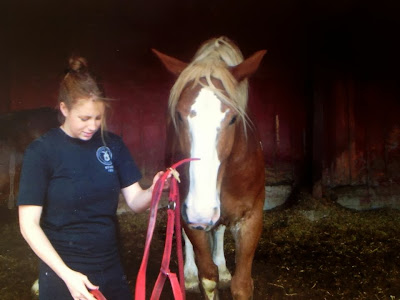 One of the sweetest faces you will ever see.  Wes coming to put his head in his halter for me.  This boy LOVES to work.  He was happy to go out every single day if we would let him.  He actually would be very disappointed if I came out and got another horse.  He would just watch me take the other horse in with his ears perked hoping I was getting that horse for another driver.

Through all of this I have always kept in contact with the owners and let them know that when Wes retires, he's coming home with me.  Or if he got sick, injured, and couldn't work anymore, before retirement, that I would be there to take him.  I also have a friend that still works at the barn and is nice enough to send me pics of him every now and then.  This has been going on for over seven years.  My mom still goes to Salt Lake City, even though she doesn't live there anymore, for business trips.  Last August I had her stop by and give Wes some of his favorite granola bars. 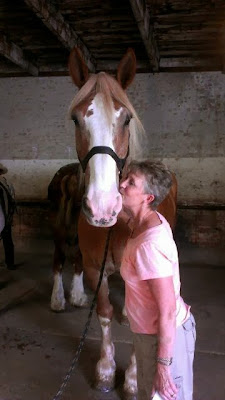 Mom with my sweet boy. 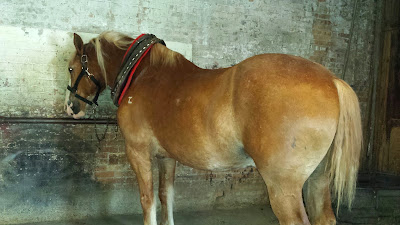 Another picture from when my mom visited this past August.  As you can see Wes looks great!!  Shiny and healthy as a...Wes.

I have gotten word recently that Wes is ready to retire.  He is officially done and can come home any time after 1 January 2014.  I have set up a Go Fund Me page to help pay for his shipping.  He will be picked up by Brookledge, the same company I shipped Klein with from New Mexico to Georgia.  They did a FANTASTIC job!  Yes, I could make a road trip out to Salt Lake City and pick him up myself but I think it would be faster and less stressful to just have a professional hauler make the 2,100 mile trip.  It would be 4,200 mile round trip for me.  I would be so emotional the whole trip because of the disbelief he's coming home.  I've waited for that day and had a lot of dreams about it.  Here is our Go Fund Me page:

The barn there finds great retirement homes for all of their horses.  Mostly drivers that have worked for them come to claim their favorites when they retire, like I am doing.  If I wasn't there to bring Wes home they would find him another good home to retire in.  But, I owe this guy, and I made him a promise.  I've missed him every day for the past seven years.  He needs to come home to me, where he belongs.

So, Wes has officially begun his last Christmas season taking customers around Temple Square and downtown to see all the lights. 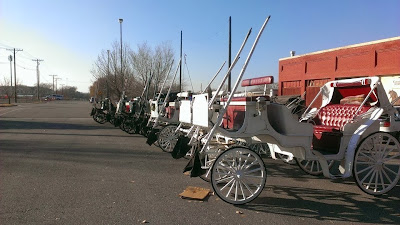 First day of the busy season this year, the day after Thanksgiving. 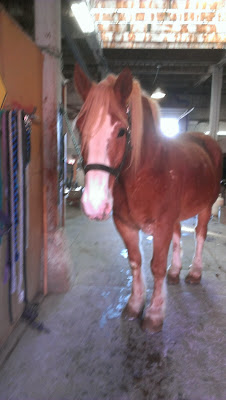 My handsome boy getting ready to get tacked up for the first night of his last Christmas season!

His whole journey will be documented with lots of pictures and video.  My mom has even offered to buy me a ticket to Salt Lake City so I can fly out to be there when he's loaded and fly back before he gets home to Georgia.